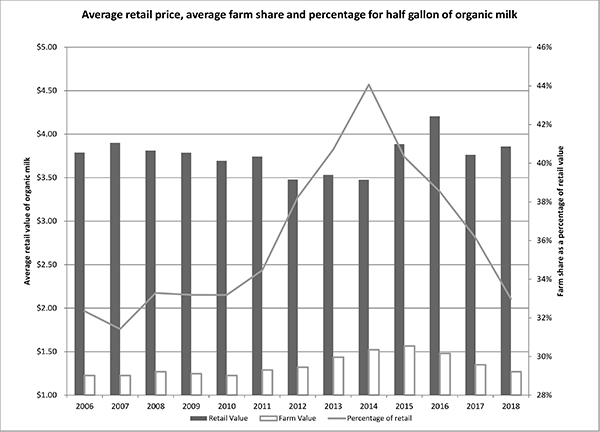 This data reflects the economic reality facing organic dairy producers across the country, with lower pay prices and producers losing their contracts. Reports from the Midwest are that smaller cooperatives and groups are losing their contracts to lower bids, especially for manufacturing milk as competition increases and inventory of organic cheese grows. At a recent producer meeting for DanoneWave, farmers in New York were told that contracts would have a $25 base price, and new contracts are reportedly twenty five pages long. Producers are reminded that they have the right for their lawyers to read the contracts plus also any advisory non-profit group. This is a legal right that the buyers can not restrict. Whether it does any good to suggest any changes is another matter because at this time producers have no leverage in an over-supplied market and most will be grateful for a continuing contract. This type of situation is what the Department of Justice decided was a monopsony, and was the reason that Stonyfield was sold separately to retain some competition in the supply side of the market. 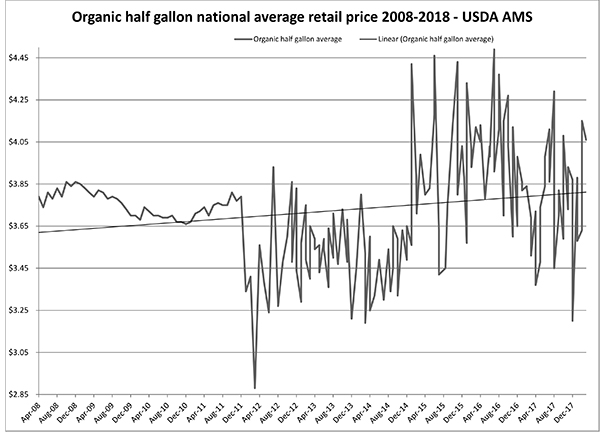 The reasons for the large oversupply include poor supply management and forward projection of demand by buyers, increase in sales of non-bovine juices (marketed as milks), shortage of available processing facilities, and the increase in large scale dairies supplying the private label buyers with large volumes at low prices because many use loopholes in the regulations, plus poor implementation of the standards by some certifiers. Organic Valley used the private label market to absorb higher volumes of milk as they grew the number of member owners, but without their own infrastructure for processing, they haven’t been able to compete with the vertical integration of companies like Aurora Dairy. Organic Valley’s joint venture with Dean Foods is reportedly “gaining momentum” but has not shown the increase in sales growth that was predicted and expected. On supermarket shelves, you still find the Organic Valley brand products at a retail price of over $1 per half gallon more than store brand organic milk containing Organic Valley milk.
DanoneWave is switching its supply to larger dairies and is, reportedly, even buying packaged product from Aurora Dairy because of the significant cost savings. Their stated priorities are to expand their sales of non-bovine ‘milk’ and simplify the supply side of their organic milk supply. This has resulted in canceled contracts in Maine and New York based on what appears to be truck routes. The new owners of Stonyfield, Lactalis, have kept a low profile because of their involvement with contaminated baby formula in Europe, and all we know is that they are not expanding their own pool of milk in 2018.

We have some good news! There is now some scientific evidence on the benefits of grass milk that is accepted in the USA. In a recently release report from a collaborative research project including the University of Minnesota, Johns Hopkins University, Newcastle University in England, Southern Cross University in Linsmore, NSW Australia, and the Aarhus University Hospital in Denmark, researchers have found that cows fed “100% organic grass and legume-based diet” produce milk with elevated levels of omega-3 and CLA, and thus provides a markedly healthier balance of fatty acids.

“Grassmilk provides, by far, the highest level of omega-3’s—0.05 grams per 100 grams of milk (g/100 g), compared to 0.02 g/100 g in conventional milk - a 147% increase in omega-3’s. Grassmilk also contains 52% less omega-6 than conventional milk, and 36% less omega-6 than organic milk. In addition, the research team found that grassmilk has the highest average level of CLA—0.043 g/100 g of milk, compared to 0.019 g/ 100 g in conventional milk and 0.023 g/100 g in organic.” “With growing consumer demand for organic dairy products, producers may be able to expand their profitability and market share by converting to grass-based pasture and forage-feeding systems,” said co-author Dr. Bradley Heins, Associate Professor of Dairy Science at the University of Minnesota’s West Central Research and Outreach Center. 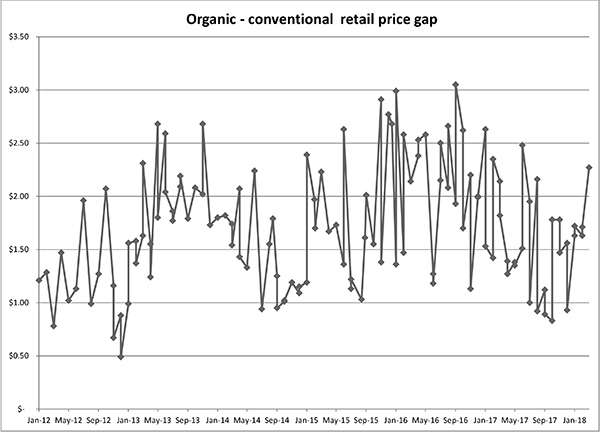 Given all these research results, supported by money from Organic Valley’s farmer owners, it is surprising that the pay price for grass fed milk has been cut by the various buyers to within a few dollars of regular organic milk. A year ago processors were telling producers in press releases that, “The growth [of Grassmilk] has barely kept up with consumer demand.” As always, we ask the question of whether producers will benefit economically from their attention to this method of production. 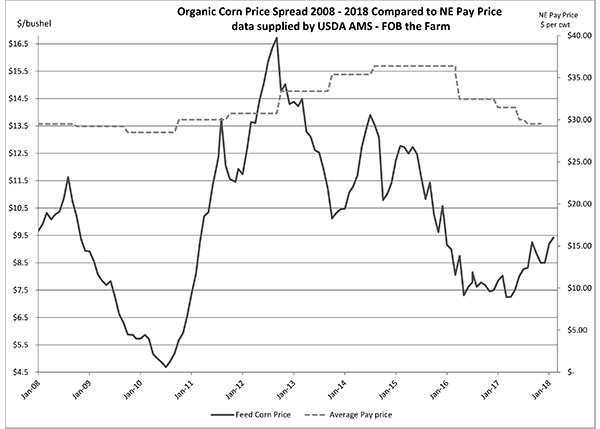 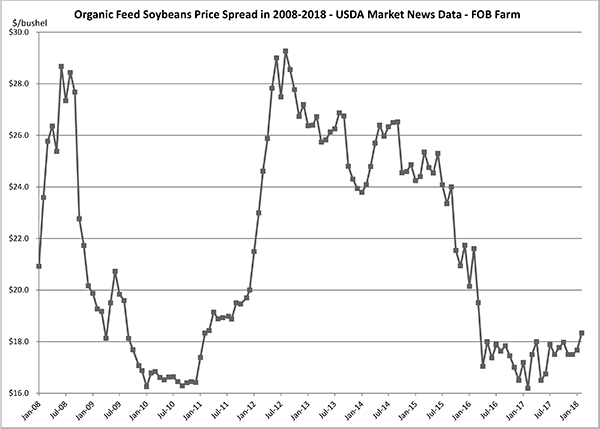