By Sonja Heyck-Merlin and Liz Pickard

The Northeast was hit by a serious heat wave leading up to the Field Days with temperatures well into the 90’s. Fortunately, by the first day, the heat had receded, and the skies were gray. The two-day event included two farm tours, engaging speakers, and delicious farm-to-table fare. A big thanks to all of the sponsors, trade show participants, and the Arnold Family who helped organize the event. 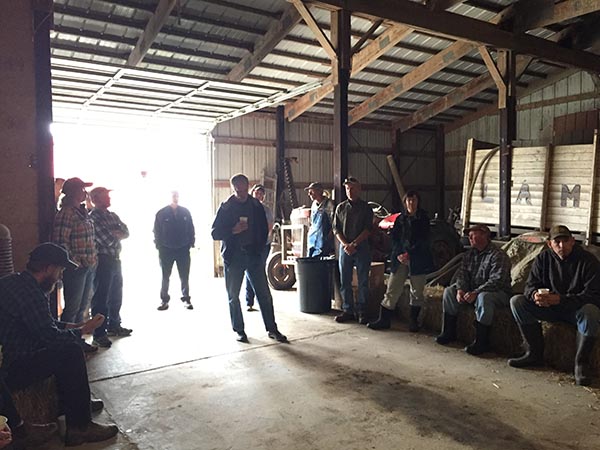 The tour began in an equipment building where attendees listened to Bill outline the history and practices of the farm.

Bill explained that central New York experienced an unusually wet summer. Organic dairy farmer Brian Bawden commiserated, and said, “You know it has been a wet summer when you get stuck putting up first crop in September.” The Casey’s well-drained limestone soils allowed them to maintain a relatively normal haying schedule but Bill said his forage quality was lower, necessitating a change in grain feeding from 2 pounds per cow a day to 4 pounds.

There was a discussion about rust which was identified in pastures at the Casey Farm for the first time in 2017. There are two types of rust- crown rust and stem rust, both caused by a fungal pathogen called Puccinia.

From there, we toured the Casey’s tie-stall where they milk their herd of 60 Holsteins, and their attached free-stall where the animals are housed. Then we strolled along a paved access lane into their 75-acres of well-managed pasture.

Back to the Truxton Community Center:
Jacob Israelow, Founder of Dirt Capital Partners

During Thursday’s lunch, Jacob Israelow introduced everyone to his organization, Dirt Capital Partners. The mission of Dirt Capital Partners is to invest in farmland in partnership with farmers throughout the Northeast, promoting sustainable farmers’ land access and security. “Dirt Capital is a flexible, alternative source of funding,” said Jacob. “We’ll be a bridge as owner of a farm until the farmer is able to source traditional financing.”

When asked how Dirt Capital is different from traditional lenders, Jacob said, “We are not a bank and not subject to bank metrics. We work with private investors who care about sustainable agriculture. We’re buying and owning the asset and then creating lease/rent agreements for a predetermined amount of time.” To learn more about Dirt Capital Partners and read about one NY farm family’s experience, click here.

Neal Kinsey carries on Albrecht’s work through his business Kinsey Ag. Services, which offer both soil sampling and recommendations based upon those soil tests. Seeing Kinsey speak in person has a way of making a person wish they had been more attentive in Chemistry class. Fortunately, we have his book (Hands-On Agronomy) to aid our understanding of soil chemistry.

“Chemistry determines the physical structure of the soil which controls the biological,” Kinsey said. “Calcium and magnesium values are the backbone of our soils. It’s percentages, not ratios that are the strength of this system.” According to Kinsey, it is chemical principles such as these that will improve our soils and make them more resilient to climate change.

Kinsey made an interesting comment which tied back to the discussion of rust on the Casey Farm. “Rust problems are related to boron and copper deficiencies,” he said.

He also explained that sulphur, spread at the rate of 50 pounds per acre, can be used in household yards for the control of ticks and chiggers. In an era where everyone knows at least one person who has been impacted by Lyme disease, this was a very interesting suggestion. 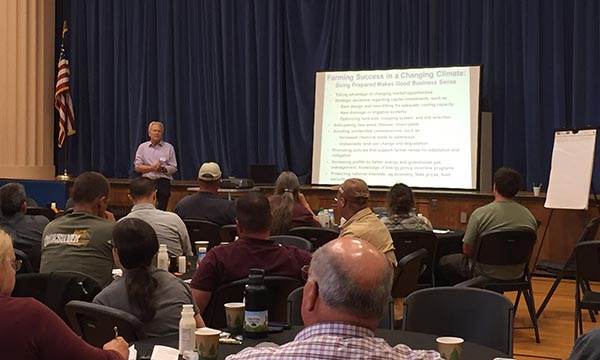 Dr. Wolfe presented a talk called Opportunities and Challenges for Dairy and Crop Production in the Age of Climate Change. “As if farming weren’t hard enough, we now have climate change to worry about,” opened Dr. Wolfe.

The challenges he presented for the Northeast were:

The opportunities he presented for the Northeast were:

Wolfe said, “There is more drought risk, although climate models don’t predict lower annual rainfall. With higher temperatures, there will be increased crop water needs but with the same amount of rainfall. The trend is also towards warmer, increased heavy rainfall events.”

In closing, Wolfe remarked,” Climate change is an inevitable challenge to society as we move forward. We’re going to have to deal with it one way or another.” 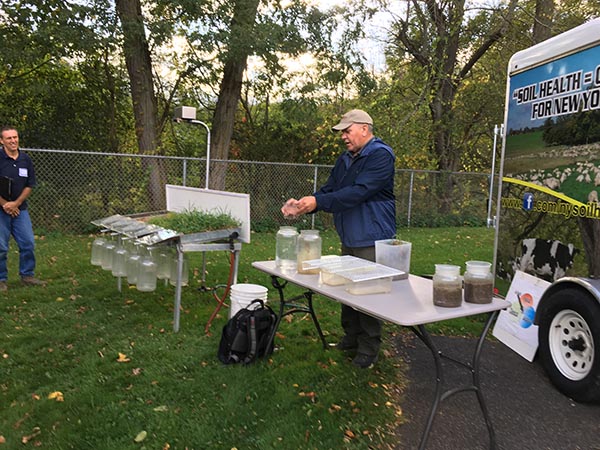 Fay Benson rolled into Truxton with a moveable lab equipped to provide demonstrations related to soil health. Funded by a grant from NRCS, the solar-powered trailer is an incredible teaching tool, providing an engaging and hands-on approach to soil science education.

A rain simulator illustrates how rainfall behaves on various soil types. In trays, several soil types were represented, ranging from a sample collected from a continuously tilled corn field to a sample from a management intensive grazing (MIG) system.

An inch of rain was applied by the simulator. Beneath each sample were two pans- one captured the run-off and one collected the water that percolated through the soil. The heavily tilled soil lost most of its water through runoff and percolation. The MIG sample retained most of the water that was applied to that sample. 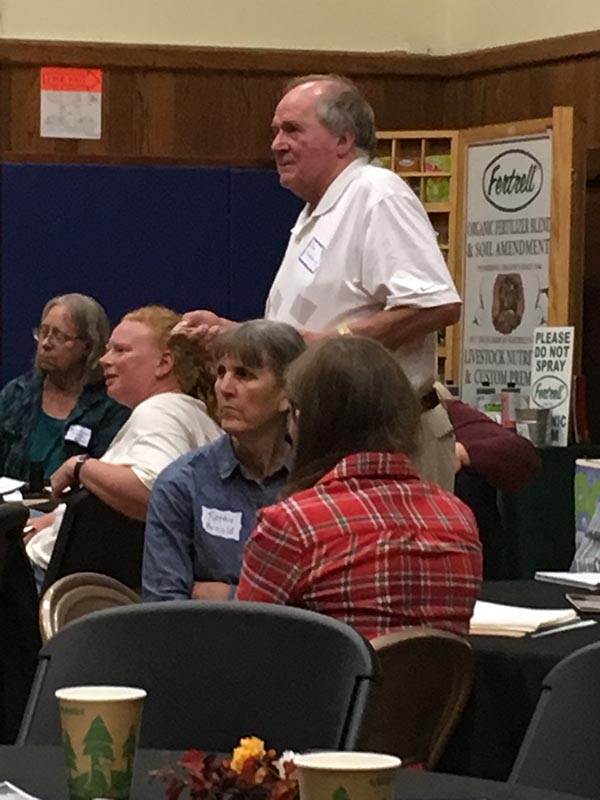 Jack closed day one of the Field Days with an interactive discussion in which he encouraged participants “to put ourselves in the hooves of the cow and think how to manage our farms from the perspective of the cow.” Dairy Logix specializes in barn design and management support. Dutch-based CowSignals is a program which educates farmers, veterinarians, and advisors around the world about preventing illness and problems in dairy cattle.

“It is wrong to apply human standards to what we think cow comfort is,” Jack said. “What the cows want is quite different from what we want.” He uses the six freedoms of pasture as the gold standard for cow comfort: feed, water, air, light, rest, and space. “We want these six freedoms to be the mantra when we walk through the barn,” he said.

Jack encouraged participants to be aware and observant before making judgements. “Look and see everything,” Jack said, “And then gradually focus in on the smaller; the individual cow. Think what the causes are of what I am seeing, and then finally act. What do I see? What are the reasons? How does it affect my management?”

The second day of Field Days started with an early morning breakfast and the very well-attended Producer-Only meeting. 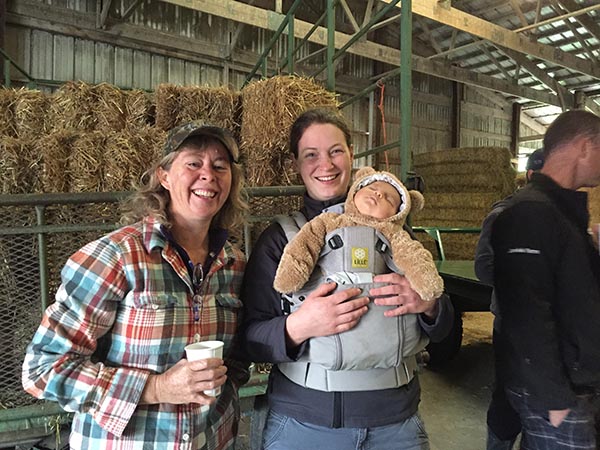 Sarah Flack kicked off the morning education program with her workshop on how to make well informed and financially sound major farm decisions. Concerning robotic milking on organic dairies, grazing consultant, Sarah Flack, discussed some of her findings in studying the data on farms that had transitioned to robots, or were considering it. She stressed that robotic milking is not necessarily right for all farms, and then discussed some of the important factors to consider in that decision-making process.

One important consideration is assessing how robots might affect a farm’s grazing system, since cows need constant access to both robots and pasture. According to Sarah, few robotic farms are able to obtain high percentages of dry matter intake from pasture.

Another point Sarah made it that ideally a cow visits a robotic milker three times a day. The increase in milk production from having more than two milkings can be used to justify the cost of robots. In a pasture-based system which requires a lot of walking, the cow’s production may be impacted by expending the extra energy. The cow may also decide that she isn’t going to take that third trip back to the barn.

Another challenge is that it’s impossible for an all-grass herd to use robotic milkers, since the system relies on the cows being enticed into the barn with grain, which is dispensed from the robot while the cow is being milked. Grist grain can clog the dispensing system, and so must be purchased in a more expensive pelletized form. This can lead to an increase in purchased grain expenses.

In his second appearance at the NODPA Field Days, Jack led a discussion on barn design. His specialty is designing robotic barns, but many different styles of freestall barns were also included in his presentation. The four most significant elements of a well-designed barn include:

The group used their skills and information gleaned from the previous night’s workshop to identify problems in barn design. The group also discussed manure management and bedded packs versus stalls. Jack showed the group some fascinating photos of barns that were not designed with expandability in mind. 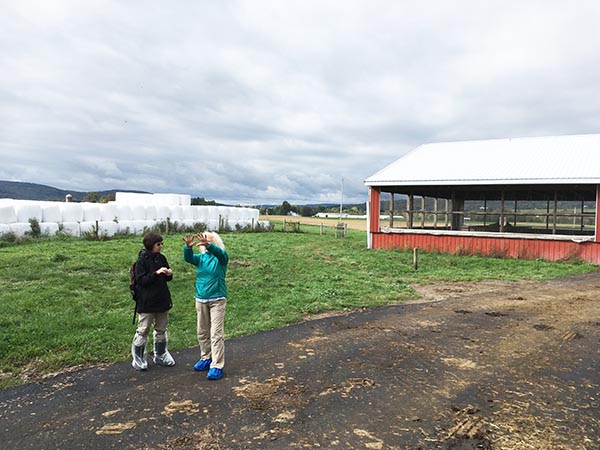 Before heading out from the Truxton Community Center, owners of Twin Oaks Dairy LLC, Kathie and Kirk Arnold, gave a brief summary of their decision-making process in designing their new barn. For more details, see Kathie’s article in September’s NODPA Newsletter link to the September NODPA News online.

Kathie also discussed her experiences as a Master Grazier in the Dairy Grazing Apprenticeship Program. Fay Benson was on hand to answer questions about the program.

Following lunch and lots more conversation, the group moved down the road to Twin Oaks Dairy for the final portion of the Field Days. Jack Rodenburg, consultant on the Arnold’s new barn, was on hand to answer questions. The group had the chance to ask him questions about the cows’ behavior in real time. Kirk and Kathie fielded questions about their Lely robotic feed pusher, barn ventilation, parlor efficiency, and more.

The 17th Annual NODPA Field Days was once again an educational, fun, and enriching time for organic dairy farmers to come together, share ideas, swap stories, address the current challenges of the organic dairy industry and develop concrete action plans for the future.