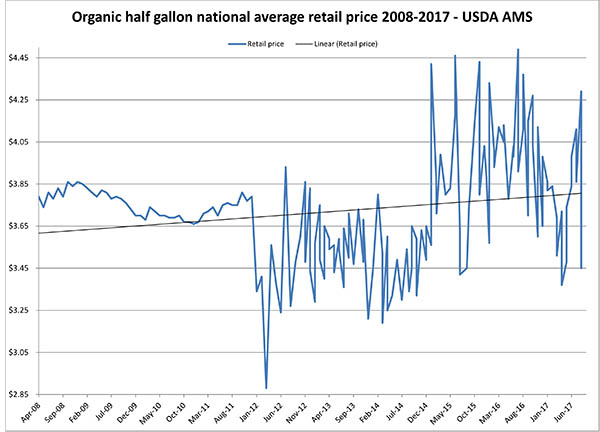 As pay price tumbles, losing between $3-10 per hundred pounds compared to 2016 , fluid milk sales continue to grow as does world-wide demand for organic milk powder. Demand for organic fluid milk shows no signs of slowing down. The USDA AMS national data reports total organic milk products’ sales for June 2017 were 208 million pounds, down 1.7% from the previous June 2016. Overall, the January-June 2017 sales are up 0.8% over the previous January-June 2016. Total organic whole milk products’ sales for June 2017 were up 4% over June 2016. This resulted in 7.7% increase in sales of organic whole milk for the first half of 2017, over sales in the same period of 2016. Usually a surplus on the supply side of dairy products and a drop in pay price is reflected in lower retail prices. Although there is mixed data from USDA AMS on retail prices of organic half-gallons and a wide difference across the country, there seems to be no rush to lower the retail price of organic milk, with the exception of Whole Foods which is under new ownership. Their new owner, Amazon, has targeted organic milk and butter for significant price reductions. Retail price cuts will almost certainly mean that the lower pay price will remain longer that the 18 months to two years it may take for the supply side to adjust to slower growth. 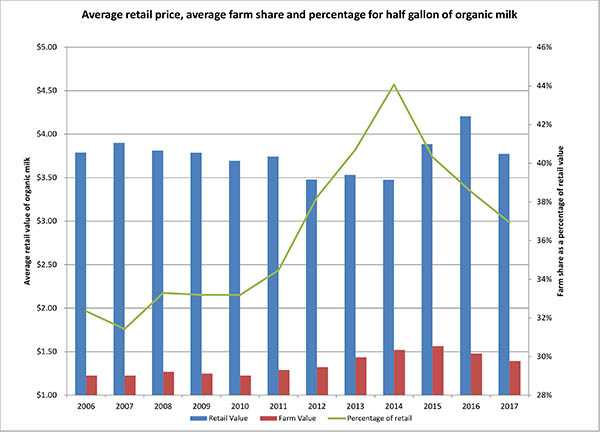 Lower pay prices will be a boon for large dairies but small to mid-size producers will suffer the most as usual. New England and the Northeast are organic milk deficient areas, with milk coming into the area from many states including Wisconsin, Ohio, Michigan and Pennsylvania and reflects the national trend of increasing utilization of organic whole milk at the retail level. In New England, Federal Milk Market Order 1 reports utilization of organic whole milk for July 2017 as 14.160 million pounds, up from 12.3 million pounds, one year earlier. The July 2017 butterfat content was 3.28 percent, down from 3.29 percent in 2016. Organic reduced-fat milk utilization for July 2017, 18.4 million pounds, was down slightly from 18.5 million pounds one year earlier.
As conventional mailbox pay price starts to rise out of their cyclical trough, organic pay prices have dropped. Maple Hill Creamery/Byrne Dairy have notified at least some of their Northeast producers (who are without contracts) that their average pay price will be $29.80 over the next 12 months, with seasonal variation in their pricing. Upstate Niagara Cooperative is supporting producers by holding the pay price at just a $3/cwt drop from 2016’s price. Horizon (DanoneWave) and OV pay prices have dropped substantially over the last year, with Horizon latest cut of $4 for September 2017 milk and OV’s continuing its $1 per cwt for inventory management, plus it $2 drop for Spring flush and the previous $2 drop. 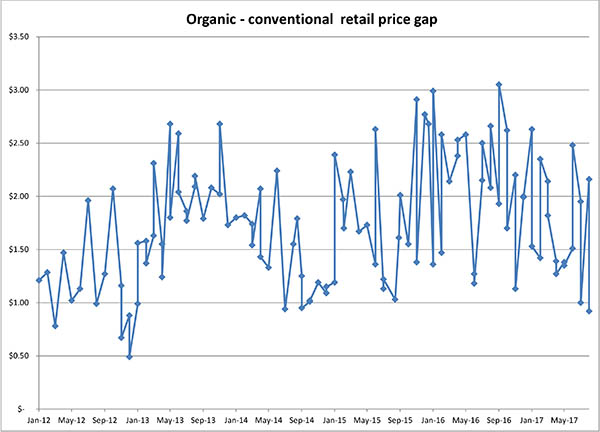 Milk buyers are not taking on any new farms, whether they are transitioned, transitioning or are those producers looking for new buyers. One buyer has imposed baseline quotas and a 5% drop in volume on 2016 production, plus financial penalties for over-production. Buyers, like CROPP, are obviously taking the hit directly, with organic milk being diverted onto the conventional market with lower prices. Some producers in the West (again without contracts) are only getting the conventional price for their milk. The drop in pay price is affecting the grass-fed market similarly. We saw this in 2009, and the same is happening again. These drops in pay price are large and unexpected, with producers looking to refinance their term loans and short term debt if unable to meet the cash needs with simple cuts in non-essential purchases. 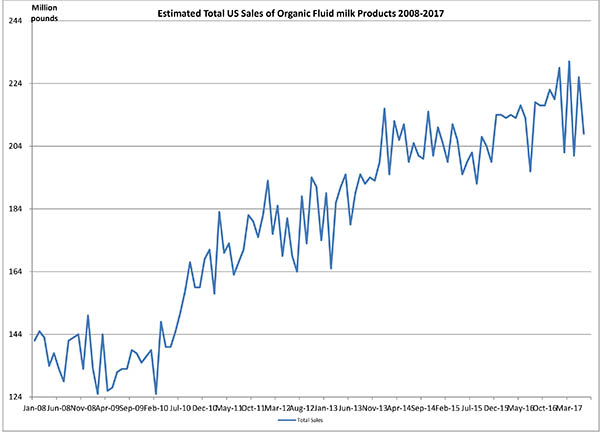 The sale of Stonyfield to the largest dairy products group in the world, Groupe Lactalis, has been finalized. It is still uncertain what changes, if any, this will mean on the supply side. There are several initiatives around advocating to Ben and Jerry’s about converting to organic within three years. While this may be an unrealistic timetable, there is the potential to use consumer pressure to leverage companies to ‘walk the talk’ when it comes to implementing their public mission statement that fuels sales. Stonyfield never had a herd of cows but they were able to use the purchase of dairy inputs from Organic Valley to paint a picture that consumers could buy into. Perhaps there is a possibility that the new owners of Stonyfield can work with Uniliver, Ben and Jerry’s parent company, to fully utilize the grass-based organic dairy herds in the Northeast.
There is little difference in the price of organic feed grain, although there are reports that with tankers full of organic corn being turned around at sea because of tighter import controls, the price of organic corn may be rising. In the Northeast, the weather picture has varied widely with some producers reporting a near perfect combination of wet and dry weather for pasture, grass conservation and corn, and others suffering the wettest year in memory and thinking of “breeding cows with gills.” With the wet weather, there is also widespread fear of mold contamination of forage and grains (see article in this issue) to further complicate producers difficulty in making a ration that is healthy and cheap but doesn’t produce too much milk.

Organic hay costs are within the same range as last year, with hay being offered at $50 per round bale or $150-200 a ton FOB with a good supply. Cheap foreign feed still dominates the market and undercuts domestic producers. 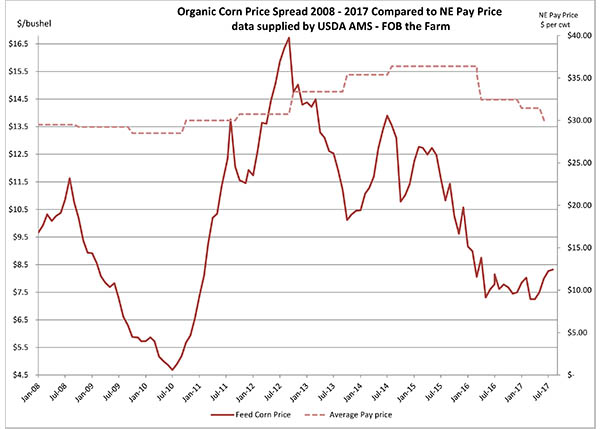 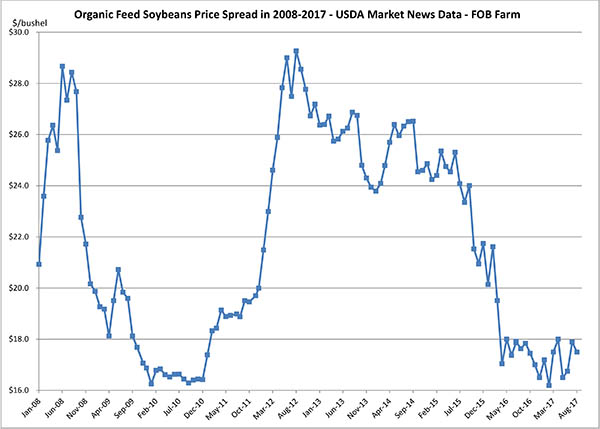