Compared to two weeks ago, organic grain and feedstuff prices were steady to firm, with the exception of food grade corn and soybeans which were slightly higher. Light demand and offerings were reported. Wheat trade was at a near standstill and low test weights on corn are becoming more predominant as harvest progresses. Alfalfa was reported at $1.00-$1.10 per RFQ point.
All prices FOB price per bushel except where stated (trucking cost needs to be added)

Eastern Cornbelt (Springfield, IL)
12/01/09
Organic grain and feedstuffs traded steady to weak. Demand and offerings were light to moderate. Organic grain movement was light heading into the Thanksgiving break. Poor crop quality was a factor in driving feed grade corn and soybean prices lower. In some eastern states, this year's corn crop has been stricken with mold and low test weights, which have limited additional grain purchases.
All prices FOB price per bushel except where stated (trucking cost needs to be added) 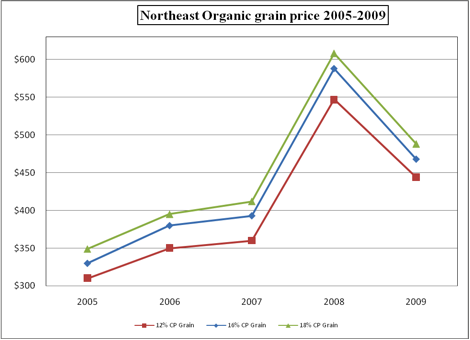