No Pay Price Increase In Sight

Times are tough! With no good news on the price of feed and no pay price increase in sight, milk supplies are tightening as producers cut back on purchased feed. While producers welcomed Horizon’s Organic continuation of their MAP, pay price is still at least $4 below the average costs of living for organic dairy family farms. There will also be the loss of MILC payments in September unless Congress can move off gridlock and limited legislation and pass a more comprehensive Farm Bill.

USDA Agricultural Market Service reports that organic milk continues to be trucked into New England and some mid-Atlantic states where both fluid and manufacturing raw milk are in short supply. Through July 2012, this has resulted in organic milk regularly being transported to the area from Wisconsin, Indiana, Michigan, Ohio, West Virginia, Colorado and California.
The consumption of organic fluid milk in the first half of 2012 is up by 6% over the first half of 2011, despite increased retail prices. The national weighted average advertised price of organic milk half gallons at the end of August is $3.91, and the price range is $4.99 to $2.69 per half gallon. The lowest price for organic fluid milk is for store branded milk, which is highly advertised and used as a loss-leader by retailers, but brand-name product is also being discounted to increase sales, with an unusually low price of $3 per half gallon recorded in August 2012. The important price-gap comparison between the weighted average advertised price for non-organic half gallons compared to organic is $1.65, up from $0.99 a month ago. During 2012, the price spread has ranged from $0.78 to $2.46. 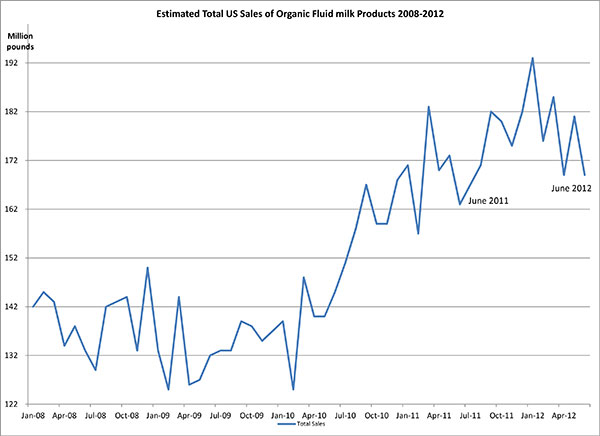