Anatomy of a Rare Drought

Anatomy of a Rare Drought

New York (NY) farmers have asked if they should expect more dry summers like the one we had in 2016 in the future with climate change. The answer to that is we don’t entirely know. Climate scientists are fairly certain that the number of frost-free days will continue to increase and summers will be getting warmer, which will increase crop water demand (Horton et al. 2011; Walsh et al. 2014).

Climate models are less reliable for predicting rainfall and snow, but most projections suggest that total annual precipitation will remain relatively stable in New York, with small decreases in summer months and possible increases in winter. Also, the recent trend of the rainfall we do get coming in heavy rainfall events (e.g. more than 2 inches in 48 hours) is likely to continue. This would suggest both flooding and drought will continue to challenge New York farmers, and it is possible that more severe shortterm droughts in summer could increase in frequency.

Given these projected impacts, we surveyed NY farmers throughout August and September (Drought Survey), so as to better understand how farmers were affected by the 2016 drought and if they are able to cope with drought risk. The survey was distributed online and in paper format with the help of Cornell Cooperative Extension and the Farm Bureau, and 227 farmers responded from nearly every county (Fig. 1). Though a majority of responses came from field crop farmers, vegetable and fruit crop farmers were also well represented (Table 1). 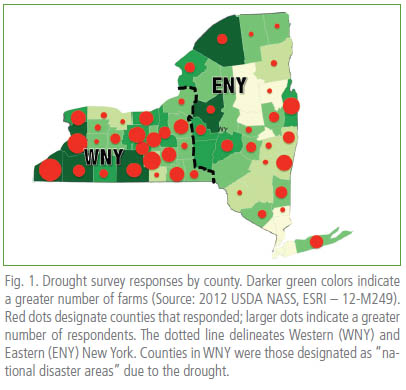 Across the state, farmer-estimated crop losses for rainfed field crops, pasture, fruit crops and vegetable crops were 31%, 42%, 47%, and 46%, respectively (Table 1).

Among fruit crops, rainfed grapes, known for relatively deep root systems, were markedly less affected by the drought than fruit trees (primarily apples) and berries (Table 1). Figure 2 illustrates that estimated crop losses of more than 30% were reported for rainfed field, pasture and vegetable crops, and some famers reported losses above 90%. Significant crop losses were reported even for the irrigated acreage of fruit and vegetable crops (averaging 6 and 27%, respectively, Table 1). This reflects an inability to keep up with crop water demand on irrigated acres in 2016 in this severe and long-term drought. When asked what most limited their ability to maintain yields, 38% said limited water supply, 31% said inadequate irrigation equipment, and 18% said poor soil water holding capacity (data not shown).

Of the 16% who reported that other factors most limited their ability to maintain yields, several mentioned: lack of time, labor costs, water costs, the need to rotate irrigation equipment through crops, excessively hot temperatures, damaged and malfunctioning equipment, and being unprepared in every way for needing to irrigate.

Additional comments from farmers related to the effect of the drought included statements about: extra costs associated with buying hay; having to sell cattle due to an inability to keep them watered and fed; and concern about the effect of the drought on next year’s crops (e.g. perennial fruit crops). Several farmers indicated factors that helped them get through the drought, including: cover cropping, no-till farming, increased soil health, and improved grazing management.

The drought impact was so severe in Western NY (WNY) that the USDA-Farm Service Agency (FSA) declared most counties in this region “natural disaster areas” in 2016, and eligible for some financial relief in the form of lowcost loans (FSA).

The more severely drought stricken farms in WNY reported higher crop loss for both rainfed and irrigated crops compared to Eastern NY (ENY) (Table 1). In WNY nearly 80% of farmers estimated the overall economic impact “moderate’’ to “severe”, and less than 20% considered in “minor” or just a “nuisance” with almost no economic impact. Many farmers in ENY also felt a substantial economic blow, but only about half categorized the impacts as “moderate” to “severe”, and the other half referred to it as “minor” or a “nuisance.” 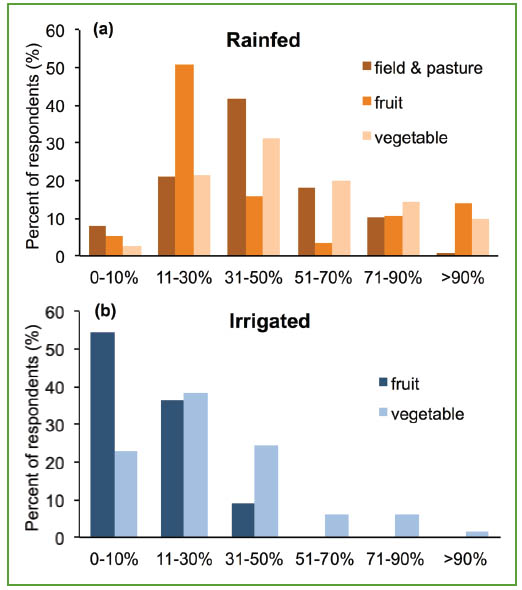 The majority of fruit farmers who irrigated reported using drip irrigation (data not shown). Most vegetable crop farmers who irrigated used moveable sprinkler pipes and big gun sprinklers. In this extreme year, several farmers who lacked irrigation equipment reported using anything from hoses and hand watering to sprayers and garden sprinklers. Sixty-five percent of farmers reported using well and pond water for irrigation, 15% used city water, and 14% used streams, lakes, or canals. Other water sources used for irrigation included hydrants, cisterns and springs. Most farmers said ponds (45%), wells (24%), and streams (22%) proved to be inadequate sources of water this year. The 6% who claimed that city water was inadequate said it was the cost that was prohibitive.

When asked what criteria farmers used to prioritize which fields to irrigate 34% said crop value, 29% said crop sensitivity to stress, 21% said location to water source, and 8% said soil water holding capacity. Other factors used to prioritize where to irrigate included: which crops had a better chance of survival (e.g. mulched or weed fabric covered crops, crops in hoop houses or high tunnels), the maximum amount they could irrigate, the ease of irrigation (e.g. planting in plasticulture), the amount of water remaining in their irrigation source (i.e. how low was the pond), age of perennial crops, or soil moisture sensor readings. When asked what criteria farmers used to prioritize when to irrigate 38% said crop sensitivity to stress, 25% said weather forecast, 22% said crop value, and 11% said soil water holding capacity. Other criteria used to decide when to irrigate included soil moisture sensors and online tools (e.g. CFS). Farmers’ responses varied when asked what they might have done differently if they had known in advance how dry this summer would be (Fig. 3). A common response (22%) was expand irrigation capacity, but many (36%) selected the “other” category and wrote in options that included suggestions related to increasing water availability (e.g. more ponds or wells), building soil organic matter and water holding capacity (e.g. cover crops and no-till), and many others. 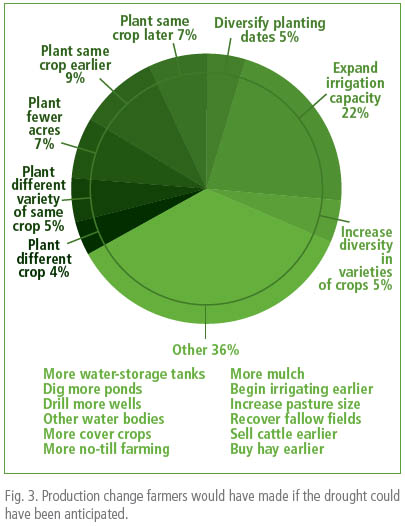 When asked how organizations such as Cornell Cooperative Extension, university researchers or government and non-government agencies could help them cope with future drought risk, farmers expressed interest in knowing more about:

In response to that same question, farmers said they wanted more:

It is clear from the results of this informal extension survey that NY farmers were seriously affected by the shortterm drought that occurred in the summer of 2016. The severely hot, dry, sunny weather stressed many crops and led to extensive crop yield loss due to farmers’ lack of irrigation equipment, water, and time. Most of the farmers surveyed said they would like better seasonal weather forecasting so they could begin taking steps earlier in the season to prepare for drought. Many farmers indicated that they are highly motivated to expand irrigation capacity, but finding the capital to do this is a major constraint.

Farmer adaptation could be facilitated by policies that reduced the investment risk for farmers, such as lowcost loans. Since climate projections indicate this type of drought will likely occur more frequently in the Northeast in the future, it is important to understand how famers can adapt and better prepare for future drought risk, as well as to understand what organizations such as Cornell University and Cornell Cooperative Extension can do to provide the help farmers need to sustain both farm productivity and water resources across NY State. 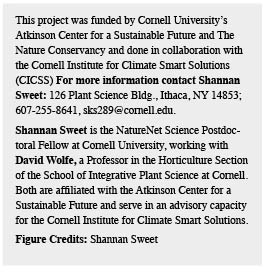