ADDED September12, 2011. Organic dairy is in a surprisingly strong position with sales increasing at a double digit pace over last year and supply tightening across the country. With a healthy demand for product, a rising retail price but a low price gap between organic and non-organic, and a high conventional price to minimize the expense of balancing surplus milk, the outlook for organic dairy processors and consumers appears to be very healthy. For producers there is more uncertainty with the rise in the cost of inputs, dramatically for corn and fuel, and many producers are feeling the strain of both cash flow and ultimately net profit. With reports of corn being in short supply and selling for up to $15 per bushel in the northeast, it’s anybody’s guess what the fall will bring, especially with a lot of poor quality first crop forage being made. As feed prices increase and work their way through the system and into new contracts for 2011 and 2012, the costs of inputs for this winter are uncertain at best. There also appears to be a difference between the remaining two major national companies, CROPP/Organic Valley and WhiteWave/Horizon Organic, in how they respond to the needs of producers who have significant increases in feed and overhead inputs. In the Northeast, this difference has shown itself in a pay price that varies by $1.50-$2 per hundred pounds of milk between Organic Valley and Horizon Organic. In August, Organic Valley will pay a dividend equal to $0.16 /cwt for all milk shipped in 2010 and will increase its pay price by up to a dollar per hundred pounds with an increase of $0.05/lb on their butterfat premium; adding $0.30/cwt to their national premium, and a $.50/cwt Market Adjustment Premium (MAP). In August, Horizon Organic will also raise their MAP by $1 for the 6 eastern states, but any differential in pay price will remain the same, with Organic Valley paying the higher price. In other parts of the country Organic Valley and Horizon are closer to each other on an average pay price.

These two processors are looking to sign up more producers and both have lifted any restriction on production either through a quota or by contract. Supply is still in slight surplus in the West and processors are looking to specific geographic areas to increase their production, mostly in the East. Both companies have absorbed producers from companies that have left organic plus there is some ‘poaching’ of producers from each other. Payments for winter production are the same, even as the price of organic corn and soybean have increased and availability tightens up. With increased feed, energy costs and overhead expense (property tax, health insurance) producers are reporting that they are barely covering their input costs and are asking for an increased pay price, especially for winter production. For most producers an increase of $4 will enable them to start re-investing in their farms again.

The new Access to Pasture rule has had little effect on both volume of milk produced or production practices as producers had already cut back on surplus cows in 2009-2010 in response to a surplus of milk and a few producers decided to exit organic production in anticipation of the new requirements. The spring flush this year was lower than usual because of the weather and there are reduced inventories of powder, butter and cheese. Grazing in the Northeast was slow to start with a cold wet spring but grass growth has increased with the warmer weather and producers report enough grazing and the opportunity for a reasonable second cut for forage conservation. The only complaint from producers about the new pasture rule has been the increase in paperwork and the variation between different certifiers and inspectors on how much detail they want within the organic system plan and in subsequent reporting.

This positive picture for organic dairy and unexpected increase in demand could not have been foreseen in early 2010 while the economy was still in recession. In retrospect, this rapid turnaround can be attributed to the increased confidence from the core organic consumers who were less affected by the recession and who place a greater priority on the quality of their food. Available data shows more households are increasing their purchases of organic dairy product rather than new customers buying organic dairy in preference to other beverages. The repercussions of the downturn in demand in 2009 saw the exit of one national processor (HP Hood/Kemp) and several regional processors (Humboldt Dairy, Organic Choice, Clover Stonetta) plus the restructuring of Lancaster Organic Farmers Cooperative (LOFCO) and merging of 53 of their producers with Organic Valley, the formation of MOO Milk and the increase in the volume of organic milk controlled by Dairy Farmers of America (DFA). During 2009-2010, some recently transitioned producers (mostly those that were encouraged to transition by HP Hood) exited dairy or returned to non-organic production; some producers took early retirement and many other producers experienced a loss of equity and cash flow difficulties. During 2009-2010, many vendors who were facing their own economic challenges shortened their credit terms with producers, who in turn were faced with a reduced volume of milk but rising fixed and overhead expenses. As an indication of profitability in 2009 and into 2010, the most recent survey results from the ongoing study by University of Maine and Vermont Extension, USDA ERS and NOFA VT shows that in 2009 government payments through the MILC program provided the difference between profit and loss for many producers. For more data on historical trends, click here.

Sales of organic fluid milk are the highest in 2 years; more value added organic dairy products are being marketed; and processors are increasing the use of packaging that reduces waste, lessens line lost and ensures longer shelf life. There is aggressive competition in the marketplace with the Horizon Organic brand as the market leader with 51.8 million units of reduced fat sales from September 2009-September 2010, and sales of 20.1 million units of whole milk, 4 times as much as Organic Valley . WhiteWave is phasing out the Organic Cow brand to consolidate and improve the marketing of their principle Horizon Organic brand. Organic Valley is expanding their range of products with flavored milk, ½ and ½ , Hazelnut creamer, organic flavored soy drink and have strong sales of their Stonyfield milk brand, plus increased sales of non-fluid milk to Stonyfield Farm for their products. Organic Valley has an agreement to provide HTST milk for NY Fresh from NY farmers’ milk by partnering with Elmhurst Dairy in Roxbury, NY. 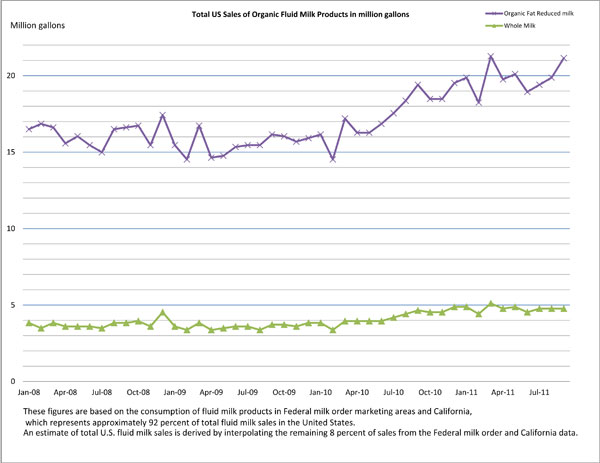 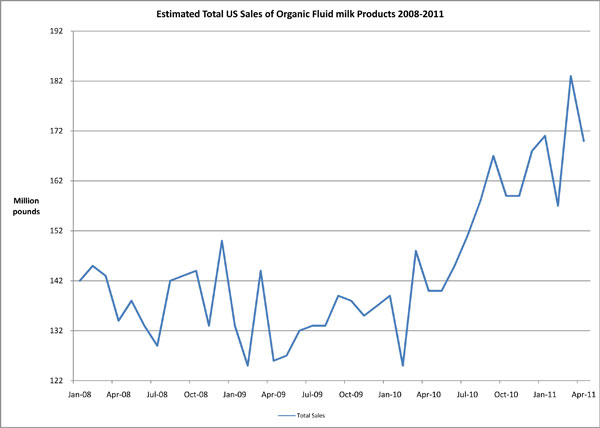 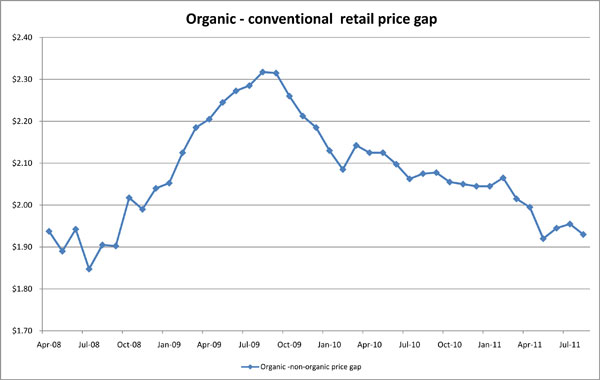 Pay Price
There are only two national organic procurement companies, plus some smaller regional groups of up to 50 producers such as LOFCO and Upstate Niagara, smaller cooperatives/companies, individual processors such as Butterworks Farm, Strafford Organic Creamery and Empire Organics, and a few established dairies that are expanding into organics such as Foster Farms and Cloverland Dairy.

Horizon Organic
During 2009 and early 2010, Horizon reported that many producers cooperated with voluntary requests for a 5% or more drop in production; that they did not terminate contracts; and that they honored contracts given to transitioning producers. They are now encouraging producers to increase production and have increased their pay price by adding $1 to their MAP for the 6 northeast states from August 2011 forward. Horizon has maintained its base pay price; an average base of $25/cwt in the northeast and a $3/cwt premium in October, November, December and January, although there is some variation in contracted pay-price. The contracts that Horizon is presenting to its producers have changed between 2008 and 2009. Some changes are:

Organic Valley
OV sales in 2009 were $523 million, down 1.3 percent from the previous year, and it was the first time the 23-year-old company had experienced lower year-over-year sales. 2010 sales were $621 million slightly down from the November projection of about $630 million in sales for 2010, although in line with previous projections in September ($622 million) and in June ($603 million).
Organic Valley has a new agreement with Stonyfield which will add about $60 million to its 2010 annual sales for production Greek style yoghurt and the expansion of its New York Fresh brand bottled at Elmhurst Dairy in NY. Members of Organic Valley, including the new members from the Stonyfield pool, received their 13th check for $0.47 per hundred pounds in June. In response to the increased on-farm costs in 2011, the CROPP/OV Board voted to pay out the profit sharing portion for the farmers with a 100% cash payment instead of the traditional 20% cash with the balance in Preferred Stock E-2. This cash payment will be sent out this summer and will be equal to approximately 16 cents/cwt for all milk shipped in 2010. Farmers have the option of investing money from their cash payment back into Preferred Stock.
In addition, the CROPP/OV Board decided to increase pay price which equals a cooperative-wide cost of $1/cwt through the end of the year. The increase comes in the following 3 parts, and will start Aug 1, 2011:

COMPONENT PRICING:
CROPP will use a pay price program based on product utilization.
Butterfat $ 2.00 per pound
Protein $1.86 per pound
Other Solids $1.65 per pound
MARKET ADJUSTMENT PREMIUM: $0.50 per cwt

DAIRY POOL CAPITAL BASE PLAN:
To meet the requirements of the Dairy Pool Capital Base Plan, CROPP farmers are required to purchase preferred stock equivalent to 5.5% of their annual base gross income. Calculation of this is based on:

OV is discussing new policies on off-farm diversion, farm conditions, cooperative conduct and maximum herd size. OV is also being pro-active with their own animal care program in anticipation of the work of the NOSB and concerns of customers. CROPP is watching the increase in feed prices and working with its members in anticipation of expected rise in price and availability of quality feed.