ADDED January 17, 2011. Organic dairy will enter 2011 in a surprisingly strong position with sales increasing at a double digit pace over last year and supply tightening across the country. The two remaining national processors of organic dairy, CROPP/Organic Valley and WhiteWave/Horizon Organic, are looking for producers and both have lifted any restriction on production either through a quota or by contract. Supply is still in slight surplus in the West and processors are looking to specific geographic areas to increase their production, mostly in the East. Both companies have absorbed producers from companies that have left organic plus there is some 'poaching' of producers from each other. Payments for winter production have kicked in; the price of organic grain and feed is still stable, and MILC payments will start again in January 2011. Whatever clouds are on the horizon with increased feed and energy costs and the uncertainties of how the Access to Pasture rule may be interpreted, most organic dairy producers see a positive outlook for 2011.

This positive picture and unexpected increase in demand could not have been foreseen in early 2010 while the economy was still in recession. In retrospect, this rapid turnaround can be attributed to the increased confidence from the core organic consumers who were less affected by the recession and who place a greater priority on the quality of their food. The repercussions of the downturn in demand in 2009 saw the exit of one national processor (HP Hood/Kemp) and several regional processors (Humboldt Dairy, Organic Choice) plus the restructuring of Lancaster Organic Farmers Cooperative (LOFCO), the formation of MOO Milk and the increase in the volume of organic milk controlled by Dairy Farmers of America (DFA). During 2009-2010, some recently transitioned producers (mostly those that were encouraged to transition by HP Hood) exited dairy or returned to non-organic production; some producers took early retirement and many other producers experienced a loss of equity and cash flow difficulties. During 2009-2010, many vendors who were facing their own economic challenges shortened their credit terms with producers who in turn were faced with a reduced volume of milk but rising fixed and overhead expenses. As an indication of profitability in 2009 and into 2010, the most recent survey results from the ongoing study by University of Maine and Vermont Extension, USDA ERS and NOFA VT shows that in 2009 government payments through the Milk Income Loss Contract (MILC) program provided the difference between profit and loss for many producers. 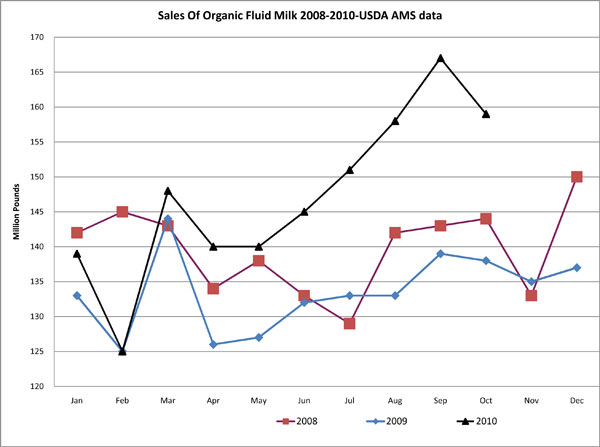 Sales of organic fluid milk are the highest in 2 years, more value added organic dairy products are being marketed and processors are increasing the use of packaging that reduces wastage and ensures longer shelf life. There is aggressive competition in the market place with the Horizon Organic brand as the market leader with 51.8 million units of reduced fat sales from September 2009-September2010, and sales of 20.1 million units of whole milk, 4 times as much as Organic Valley . WhiteWave is phasing out the Organic Cow brand to consolidate and improve the marketing of their principle Horizon Organic brand. Organic Valley is expanding their range of products with flavored milk, ½ and ½ , Hazelnut creamer, organic flavored soy drink and have strong sales of their Stonyfield milk brand, plus increased sales of non-fluid milk to Stonyfield Farm for their products. Organic Valley recently signed an agreement to provide HTST milk for NY Fresh from NY farmers' milk by partnering with Elmhurst Dairy in Roxbury, NY.

With the rebound of the non-organic market, the price gap between organic and non-organic retail pricing has decreased, down from a high of $2.32 in August 2009 to $2.05 in October 2010. The narrower the gap the more attractive organic milk will be for price conscious consumers. 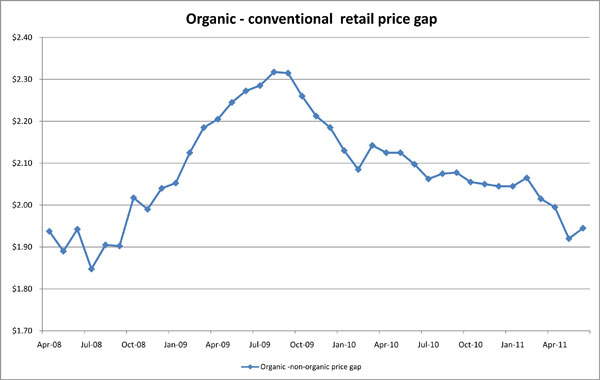 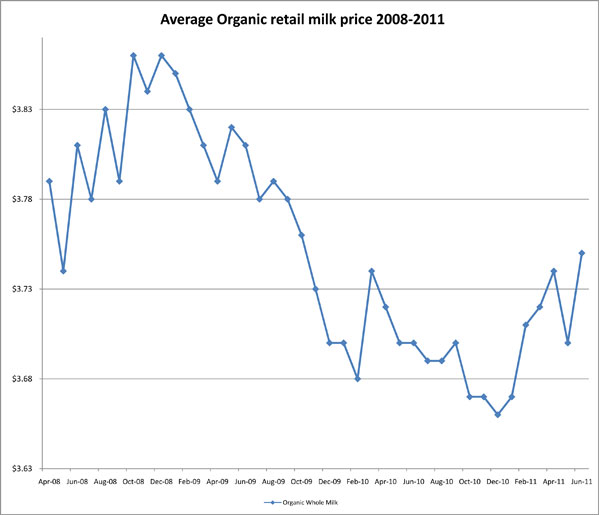 There are only two national organic procurement companies, plus some smaller regional groups of up to 50 producers such as LOFCO and Upstate Niagara, smaller cooperatives/companies, individual processors such as Butterworks Farm, Strafford Organic Creamery and Empire Organics, and a few established dairies that are expanding into organics such as Foster Farms and Cloverland Dairy.

During 2009 and early 2010, Horizon reported that many producers cooperated with voluntary requests for a 5% or more drop in production; that they did not terminate contracts; and that they honored contracts given to transitioning producers. They are now encouraging producers to increase production. Producer reports indicate that Horizon dropped its $1/cwt MAP for the summer but maintained its pay price; a base of $27/cwt and a $3/cwt premium in October, November, December and January, although there is some variation in contracted pay-price.

The contracts that Horizon is presenting to its producers have changed between 2008 and 2009. Some changes are:

Organic Valley/CROPP Cooperative (CROPP) has maintained its pay price for its full members since it introduced its quota program in July 2009. The 2010 base component price is $27.07/cwt with a $3/cwt seasonal incentive for milk produced in December, 2010, January and February, 2011and a $1 'Market Adjustment' deducted in May, June, and July. CROPP's hauling fee was increased from $750/year to $2,160/year earlier in 2009 and remains at that level. OV is discussing new policies on off-farm diversion, farm conditions, cooperative conduct and maximum herd size. OV is also being pro-active with their own animal care program in anticipation of the work of the NOSB and concerns of customers. CROPP is watching the increase in feed prices and working with its members in anticipation of expected rise in price and availability of quality feed.