ADDED September 6, 2010. The full effect of the downturn in demand for organic dairy has been felt by all producers across the country, but we are now entering a period where demand is increasing. When Kevin and Lisa Englebert became the first certified organic dairy in 1984 there was no defined future but we all knew what was meant by Access to Pasture. A quarter of a century later, we have defined Access to Pasture (which has been unnecessarily complicated by some certifiers) but still don’t know what the future holds. Organic milk is now a commodity with a loyal customer base but still searching for a clear future direction and a secure, sustainable market, with all the problems associated with a commodity, which we know so well from the non-organic milk market. The free market system may well have solved the 2009 surplus, but we will lose or place unmanageable stress on the most vulnerable farm families; mostly the younger families that transitioned with the promise of a stable pay price.

Processors and handlers chose to manage the 2009 surplus in many different ways. HP Hood dropped many contracts, and then introduced utilization clauses before passing its remaining contracts over to CROPP Cooperative. The remaining companies introduced formal and informal quotas; lowered the farmgate price; introduced utilization clauses; cut off producers with low quality or who were in isolated locations; and used their contractual power to the fullest. While we saw a 3% drop in national sales of organic fluid milk from 2008 to 2009 (USDA-AMS data), we are coming into supply/demand balance, even short supply in some parts of the United States. Both national brands are looking for more milk in the Northeast and Midwest and CROPP Cooperative has lifted restrictions on their producer owners to produce to their agreed base, which in some cases is lower than production prior to the introduction of the quota. The West is slowly coming back into balance as more organic milk is being purchased on the spot market and milk powder is being stockpiled.
A quick overview of the situation is: 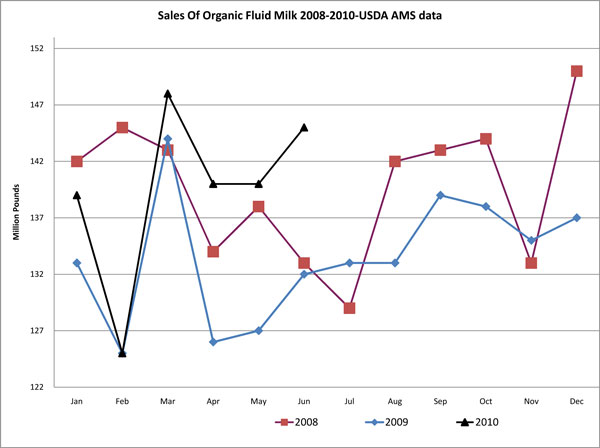 With the rebound of the non-organic market, the price gap between organic and non organic retail pricing has decreased, down from a high of $2.32 in August 2009 to $2.08 in August 2010. The narrower the gap the more attractive organic milk will be for price conscious consumers. 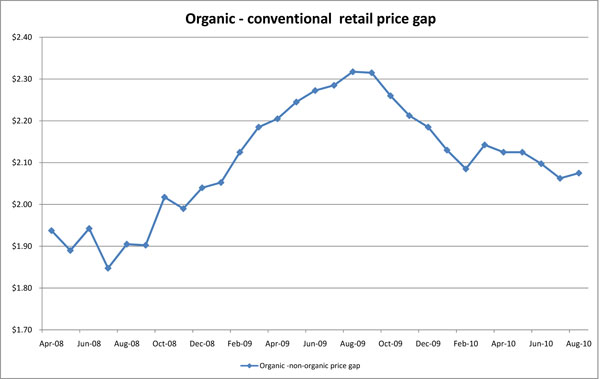 Pay Price
There are only two national organic procurement companies, plus some smaller regional groups of up to 50 producers such as LOFCO and Upstate Niagara, smaller cooperatives/companies such as Organic Dairy Farmers Cooperative, individual processors such as Butterworks Farm, Strafford Organic Creamery and Empire Organics, and a few established dairies that are expanding into organics such as Foster Farms and Cloverland Dairy

Stonyfield Farm Brand
Beginning January 2010, HP Hood no longer procured organic milk for the Stonyfield Farm fluid milk brand. OV/CROPP assumed that responsibility and set up the Stonyfield Supply Group (SSG). Producers in the SSC are being paid a base pay price with a deduction based on the utilization of their organic milk. In determining the pay-price, the amount of supply produced by the SSG is compared to the amount of sales under the Stonyfield milk brand (including the private labels); the resulting organic utilization is the basis for their blended pay price. There is a cap on production and the “active base” within the SSG is based on the previous 12 months production. The SSG group producers report that they are averaging a 100% organic utilization and anticipate they will be offered full membership of the cooperative in the near future as demand grows and supply is increasingly short. It is anticipated that the SSG pool will disappear and milk for the Organic Valley and Stonyfield farm brands will come from the CROPP pools of milk.

Horizon Organic
Horizon has finished their producer meetings and was able to inform attendees at the last of the meetings that they could increase production. During 2009, Horizon reported that many producers cooperated with voluntary requests for a 5% or more drop in production; that Horizon did not terminate contracts and they honored contracts given to transitioning producers. Producer reports indicate that Horizon has dropped its $1/cwt MAP for the summer but maintained its pay price; a base of $25/cwt and a $3/cwt premium in October, November, December and January, although there is some variation in contracted pay-price. The contracts that Horizon is presenting to its producers have changed between 2008 and 2009. Some changes are:

Organic Valley
Organic Valley/CROPP Cooperative (CROPP) has maintained its pay price for its full members since it introduced its quota program in July 2009. The projected 2010 base component price is $27.07/cwt with a $3/cwt seasonal incentive for milk produced in December, January and February, 2010 and a $1 ‘Market Adjustment’ deducted in May, June, and July. Members who had money deducted from their monthly checks for over production but remained under their total quota for the first six months (July-December 2009) will be receiving reimbursement checks. CROPP’s hauling fee was increased from $750/year to $2,160/year earlier in 2009 and remains at that level. At its June 16, 2010 meeting the CROPP Board of Directors elected to raise the quota they established in 2009 from 93% to 100% of Active Base starting August 1, 2010. The only exception is allowing the Southeast to grow their present Active Base up to 110% as part of the regional aspect of their supply program. The Board has not decided on a 2011 plan for the quota, but the CROPP Supply Committee has recommended removing the quota completely during January and February. There is still a process for producers to appeal their Active Base as a 100% of Active Base does not necessarily equate to production prior to the imposition of the quota in July 2009. OV is discussing new policies on off-farm diversion, farm conditions, cooperative conduct and maximum herd size. OV is also being pro-active with their own animal care program in anticipation of the work of the NOSB and concerns of customers.

Table 1: Overview of pay-price in New England up to July 2009 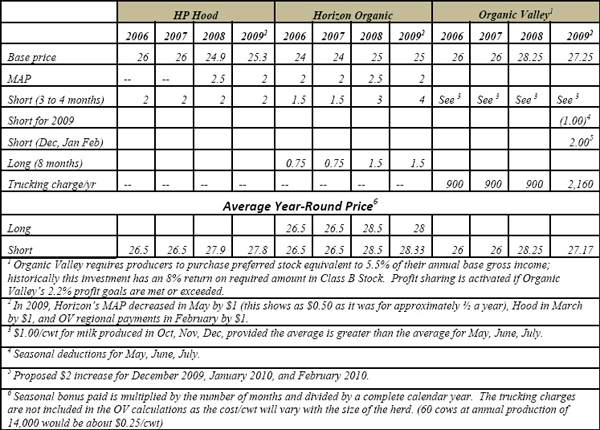 The profitability of organic milk production in the US has suffered along with the conventional dairies. Organic dairies still face high feed prices plus increases in energy and other overhead costs. The March 2009 ERS Monthly Milk Costs of Production estimates for conventional dairies in Wisconsin, Vermont, and New York were, on average, $21.54/cwt, $24.94/cwt, and $26.55/cwt, respectively. Organic dairies, on average, have higher production costs by about $5 to $7 more per cwt. Thus, implied production costs for organic dairies in the three States can be approximated at $27-29/cwt (Wisconsin), $30-32/cwt (Vermont), and $32-34/cwt (New York).

In 2009 pay prices for organic milk will average about $27.43/cwt. At current estimates of production costs, organic dairy farmers in Vermont and New York are losing about $4/cwt and $5/cwt, respectively. The average milk price paid to dairy farmers by the two largest organic processors in Wisconsin (Organic Valley and Horizon Farms) is currently $24.63/cwt. At that price, the average loss for Wisconsin organic dairy farmers is $3/cwt. Costs vary greatly across farms and production methods. Farms that rely more on purchased feed inputs can expect to see greater losses than farms that rely more on pasture-based feeds. Organic dairy farmers use fewer feed concentrates and more forage than conventional producers; however, the purchased feed they do use has a higher per unit cost since it must be certified organic feed. For example, prices published by USDA’s Agricultural Marketing Service at the beginning of May 2009 show Upper Midwest organic feed grade corn at about $7.48/bushel, yet conventional No. 2 yellow feed corn was about half the price, averaging $3.90/bushel in Chicago.

Over the past 5 years a joint project between NOFA and UVM Extension has examined the economics of organic dairy production in Vermont and Maine, with the study looking only at Vermont for the last 2 years. What they found is an agricultural sector that experienced a surge in profitability and prices in 2006 only to see those profits erode by 2009. The study involved developing balance sheets and accrual income statements from participating farms that were paid for their assistance.

The chart below gives an indication of the difference in profitability between organic and non-organic dairies in Vermont and Maine.