The Dairy Farm Business Summary is completed annually and is used to measure the progress of the farm business. Financial, herd and crop data are gathered to give the user an accurate picture of the farming operation at a specific point in time, usually the end of the year. The program used is web based on a secure server to preserve the confidentiality of the information. Cornell Cooperative extension personnel usually assist the producer in completing the data input, but with some training producers who are comfortable with computers can easily complete the program themselves. Data is reviewed by Cornell University farm management faculty for completeness and accuracy before being accepted as part of the database.

The report gives the producer beginning and ending balance sheets, an income statement, a cash flow statement and a reconciliation of owner equity. Additionally, herd production results are compiled along with crop yields and dry matter conversions. The producer is able to compare their farm with similar farms in the data base. The report can be used by the producer to compare year to year operational results so that plans for improvement can be established for the farming operation

Organic dairy farm operators throughout New York State submitted business records for summarization and analysis through Cornell Cooperative Extension’s Farm Business Management Program. For the years 2010 and 2011 we have published reports of the results from certified organic milk producers. In addition, we have compared the organic farms with average data for similar sized non organic dairy producers. This article contains excerpts from the reports and commentary on the data collected and observations on the management styles for organic producers. Copies of the complete report are available for a nominal charge and can be obtained by contacting Cornell University at 607-255-8429. 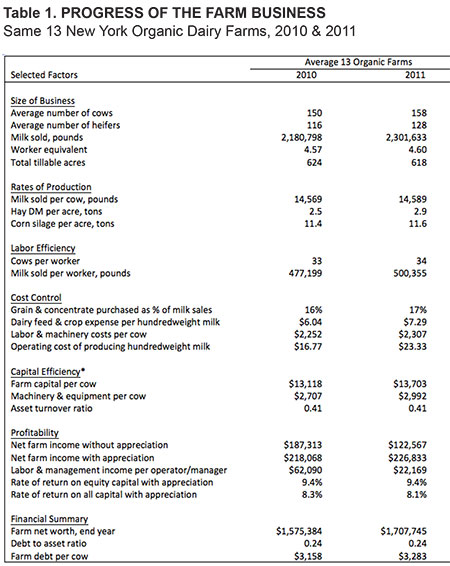 Table 1 above is a comparison for the same 13 organic farms who participated in both the 2010 and 2011 years. The data summarized are fairly consistent for the two years studied. The most significant factor is the increase in the cost to produce a hundredweight of milk, $16.77 for 2010 versus $23.33 for 2011. Most of this cost increase is attributed to the increase in the cost of feed along with increases in petroleum related expenses. The increased cost most likely lead to the $64,000 reduction in net income as production levels and the milk price remained relatively stable. The farming operations appear to be relatively stable with a 24 percent debt to asset ratio, a significant ending net worth and a reasonable rate of return on equity.

Care should be exercised when using these averages as there are wide differences in the data from the 13 farms, but the trends are important. These differences are primarily due to the different management styles of farmers submitting the information. The tradeoffs exhibited seem focus on being low cost by limiting feed purchases and relying on grazing and growing their own feedstuffs. This practice tends to reduce herd production and the margins seem to be tighter. Managers who focus on higher production seem to rely more on purchased feed to supplement what is grown on the farm. This group tends to have higher costs but also higher revenues. Whatever management style is employed financial analysis, careful budgeting and ongoing cost monitoring seem to
be one of the keys to success. 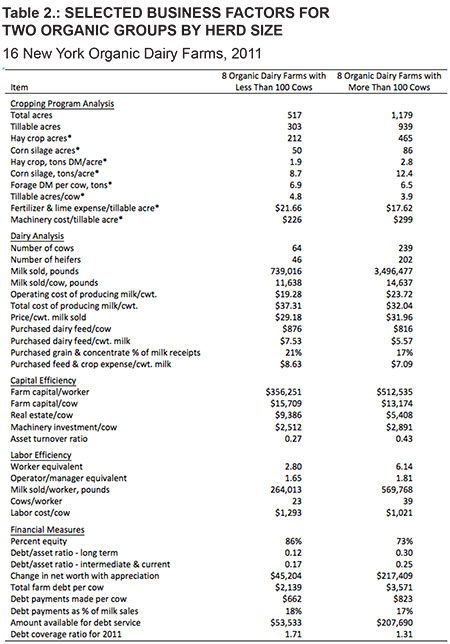 The final two tables (Tables 3 and 4, right and below) compare the 16 organic Dairy farms in our 2011 data with 64 Non-organic farms of similar average herd size. The data seems to indicate there is not a significant advantage for either organic or non-organic milk producers. The net income without appreciation is higher for the Non-organic farms both on an actual basis and per cow basis. 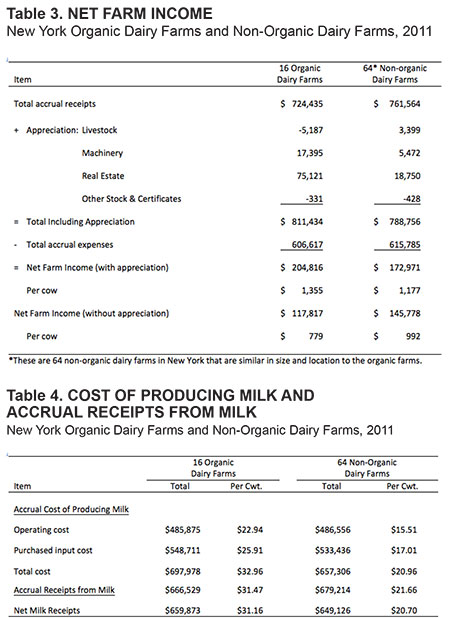 Our 2011 data seems to indicate that there does not seem to make much difference in total returns for either organic or non-organic producers. What is important is the need for financial management and systems in place for effective cost control. One of the best systems is completion of the Dairy Farm Business Summary. As can be seen from the tables above the summary will give the producer data on most facets of the farming operation and the ability to compare with similar sized producers both organic and non-organic.

More information and a sample report is available on the website at http://dfbs.dyson.cornell.edu/. To complete the summary please contact your local Cornell Cooperative office or Cornell University directly at 607-255-8429 or email at rko5@cornell.edu.