With gridlock in Washington DC, dairy farmers may be the only group that could benefit from Congress dropping over the financial cliff. Without a Farm Bill, there is a default provision within permanent Farm Law that requires the Secretary of Agriculture to set the dairy price support between 75 and 90% of parity. Taking the November 2012 parity price of $52.70 as a guide that suggests the Secretary would have to set the dairy support price at a minimum of $40 on January 1, 2013 if no new farm legislation is passed. Having organic and non-organic raw milk selling wholesale at the same price would throw a lot of confusion into the retail market!!

The current reality with organic pay price is that processors are not yet offering any increases in pay price and costs are rising. In the northeast, both Horizon and Organic Valley are paying the same pay price before quality premiums are added, $29-30 per hundred pounds which is only $2 higher than 2008. There seems to be no break in the price for feed with 16% crude protein organic feed nearly double what it was in 2010, even with imports of soybeans and substitution of other grains and alfalfa in pelleted mixes.

Factor in high fuel prices, increased costs of other inputs necessary for winter feed conservation, and increases in overhead costs - especially in health insurance, land rent and taxes - and it is clear that costs of production are only continuing to increase.

Across the country organic dairy farm families report that they have more debt and more unpaid bills over 30 days than they had two years ago.

With no MILC subsidies to rely on, processors need to take responsibility for supporting their producers with a higher pay price and they need to pay the seasonal Market Adjustment Premiums (MAPs) all year while input prices are so high.

The silver lining is that the cull cow and beef prices still remain high so those that do not have enough feed on hand can lower their cow numbers to match their feed inventory. In the Northeast there are now two buyers for organic cull cows, Organic Prairie and Delft Blue, and there are rumors that a meat packer in southern Vermont is interested in buying more organic livestock.

Horizon Organic increased their MAP by $2 in February 2012 and Organic Valley increased their base by $1 and MAP by $1 in March 2012, to add to the $1-1.50 increase they both gave in September 2011. Horizon Organic announced at the end of April 2012 that their MAP will be maintained at $3 or $3.50 /cwt (depending on geographic location) until the end of September 2012 and then announced the open ended continuation of that MAP in October. Horizon has added their 4 month seasonal payment of $3 to the MAP to make a total MAP of $6.50.

The average pay price nationally is estimated at $30/cwt although that will vary by region. Producers across the country are still requesting another $5 per cwt to reach a breakeven point for 2012 based on sound economic analysis from independent sources using data from farmers in all areas of the US. Organic Valley and Horizon have the same pay price before quality premiums but some of the regional processors are currently paying more.

For the 8th year, UVM Extension and NOFA Vermont collected economic data from 40 Vermont organic dairy farms. In 2011, the average farm of 57.4 cows earned a profit of $40,879 (median of $31,941) before any charges for family withdrawal which was calculated at $35,000, leaving, on average, a return of $5879 (median -$3060) of profits for reinvestment and paying real estate loan principles. The average farm shipped 13,515 lb. of milk per cow (median 13,091) and received an average price of $30.64 per cwt. (median $30.89). The return on assets was 1.34% (median 0.74%). For 2011, there were 19 farms with net incomes above zero and 21 farms with net incomes below zero. Note that the family cost of living has remained constant for the past few years at $35,000 (half the median income for a family of four) for comparison between years. If a higher cost of living was used, average profits would be lower. In addition, the study uses a conservative estimate for the value of land, cattle, and equipment to assess return on assets. These results indicate a continued period of low profits that does not return even a low amount of $35,000 for unpaid family labor for more than half of the farms in the study. In contrast, in 2006 the average farm in the study earned $58,443 before family living and the return on assets was 4.2%. Milk price was highest in 2008 at $30.90 per cwt. With expected increased expenses, the profits from organic dairy farms will likely decline further without some increase in income. So farmers may not have much choice except to increase milk production per cow or add more cows. For the first time, in the 8 years that this study has taken place, it was more profitable to be a conventional dairy farmer than an organic dairy farmer.

What is the effect on sales if processors pass on these increases to their retail buyers?
A $2 increase per cwt for farmers will be 9 cents per ½ gallon wholesale increase and with a 30% retailer mark-up would be an 11 cent increase. The mark-up will vary between retailers. This assumes that the processor doesn’t increase their costs over what they are paying producers. With a 21 cent per ½ gallon increase in retail price, sales increased by 5.2 million gallons from January 2011-January 2012. 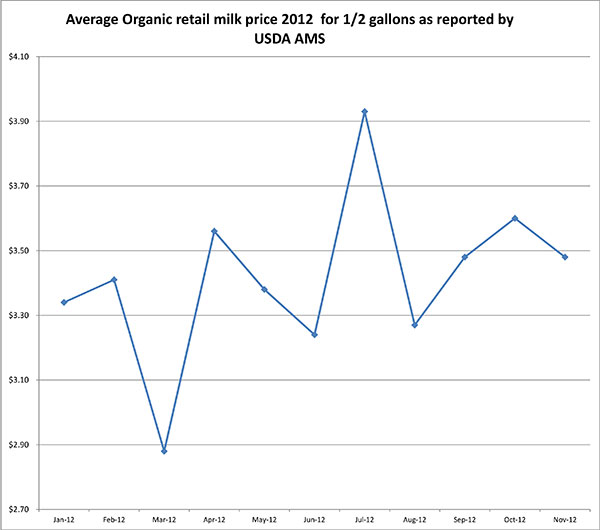 The advertised price spread between organic and conventional half-gallon milk is $1.27. The average price spread this year has been $1.31. The smaller the gap the more attractive it is for consumers to purchase organic milk. 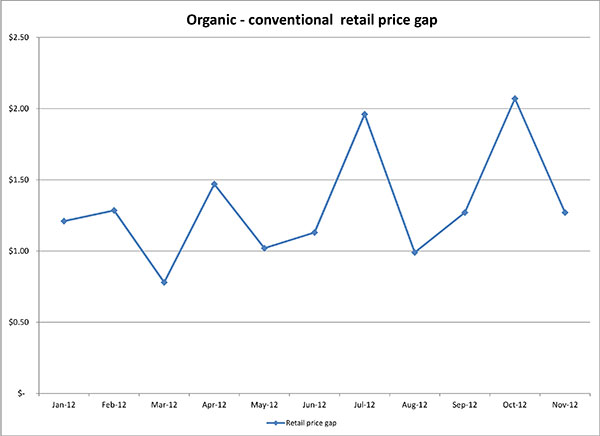 Despite the increases in retail prices, sales of fluid product in August 2012 has continued to increase, up 10% from August 2011 and a year to date increase over last year of 5%, with a surprising increase in sales of Whole milk over Fat-Reduced milk. Obviously organic milk continues to be a loss leader to attract customers to other organic products. Organic dairy processors continue to compete to supply low priced store brand milk, for example, selling milk at a lower wholesale price to stores that package the milk in their own branded cartons - same milk as branded product but at a lower wholesale price which make more money for the retailer and less for the farmer – such store brands are Wal-Mart, Cosco, Trader Joe, Wholefoods, Safeway O Organic. Aurora and Organic Valley are the top two suppliers of private label milk. 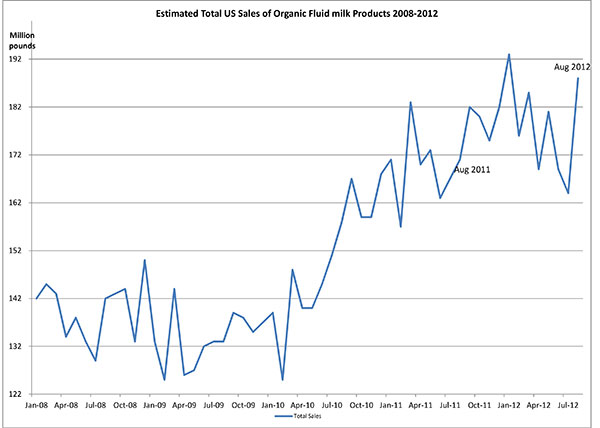 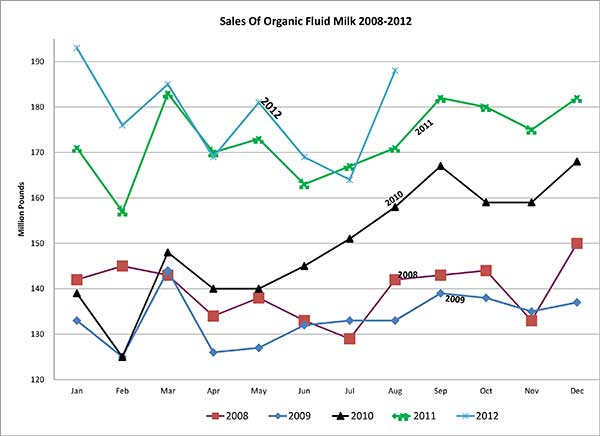