By Kathy Voth, Livestock for Landscapes 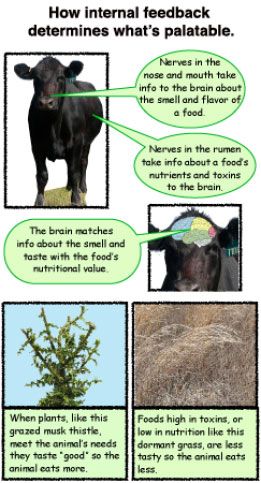 Added February 6, 2013. In July of 2012, the dairy heifers at Green Wind Farm did something that that farm’s heifers had never done before. They transitioned to pasture without losing condition. They did it thanks to owner Julie Wolcott using a little bit of animal behavior science to not only teach the heifers to eat weeds, but to also give them the experience they needed to find food in pasture on day one.

As an organic dairy farmer Julie was looking for tools to manage her milkweed, brown knapweed and thistle in pasture. So in the summer of 2012, the Vermont Pasture Network asked me to work with her to train her herd to eat weeds. Before starting we made sure that the weeds were safe to eat and that they would not cause changes in milk flavor. Then I wrote up a training “recipe” for her, and Julie began training her heifers while they were still in the barn. Over the course of 4 days, she introduced the heifers to eight feeds with different flavors, smells, shapes and sizes, but all of them strange to her trainees. On the fifth day she began introducing them to the target weeds, and because they were just one more strange looking food in a series of strange but tasty foods, the heifers ate them too.

The day in July that I visited Julie’s farm was also the day she was putting the trained heifers out on pasture for the first time. She mentioned that the first few months of a heifer’s life on pasture were pretty hard, and that they typically lost condition as they adjusted to their new lives. She wondered if the training would help them transition more easily. With that in mind, we ran out to the pasture and picked a little of everything growing there. (Check out this video taken by Jenn Colby of the Vermont Center for Sustainable Agriculture to watch how much fun I had introducing her heifers to everything they were about to find in pasture: http://www.youtube.com/watch?v=hdTFRJHpLVs&feature=plcp.)

Our goal was to let the heifers sample a little of everything in an environment they were used to, so that when they stepped into the pasture for the first time, they would recognize their food.

A few weeks later Julie wrote to say how well things were going for her heifers. “Their transition from dry hay and being fed to grazing was remarkable,” she wrote. “They didn’t get gaunt. They didn’t seem lost. And they are easy to handle. A few of them had pink eye this week and I could halter each one to treat them. Now I just need to share my enthusiasm for your work with others.”

Why were Julie’s heifers so successful their first time in pasture? It’s because Julie did for her heifers what their mothers were not there to do. She showed them what was good to eat. With each new food she brought, she stretched their palates and minds, and because they had good experiences with the internal feedback from the nutrients in the foods, they learned from experience that she was a good provider. By the time I arrived, they were willing to taste anything we brought them. Then when we turned them out from the barn into pasture, they immediately knew what was good to eat. Thus, the weed training solved two problems for Julie; what to do with the weeds in her pasture, and how to help her heifers move to pasture without losing condition.

If you’re a dairy farmer with similar issues, here’s a little more background to help you understand why this works for your animals. 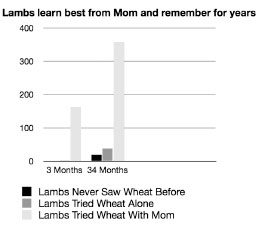 Over the last two decades researchers studying how animals choose what to eat have found that mother is the single most important factor in determining what the offspring will eat. For example, in this graph, the lambs that tried wheat with their mothers at 3 months ate more then, and later at 34 months of age, they ate significantly more than the lambs who had not eaten with their mothers or had never seen it before. What this shows us is that without Mom to show them what’s safe, they won’t do as well with new foods.

Since we can’t show our livestock what to eat by grazing with them in pasture, we have to use different ways to demonstrate good choices to them. When I was learning how to teach cows to eat weeds, I noticed how quickly they got used to a routine of being fed and decided that I could use that to my advantage. So I created a routine where I showed up with something good to eat every morning and afternoon for four days. You can modify the routine to fit your own schedule, just be sure to come at the same time every day, and give them 8 different foods to try over the course of the introduction period. I drew the number of feedings from research that showed that it takes 5 to 10 tries before an animal is comfortable with a new food.

But our animals won’t trust us to feed them well if the foods we give them don’t pass their internal feedback mechanism’s approval (see picture). For training I give them the “candy” of the livestock world: things high in protein. Fortunately weeds are quite nutritious, and often are equivalent to alfalfa, so they are very palatable. When I introduce weeds, they’re just one more, kind of strangely shaped candy. So, with these few steps, we can almost replace Mom for our trainees, and teach them what’s good to eat.

If you’re an organic producer with weed issues, you might consider training your replacement heifers to eat them, or you might simply consider introducing pasture forages to your heifers while you’re feeding them in the barn.