Grazing certified organic pastures means forgoing tools - those chemical controls - which are often the first choice when dealing with plants which are growing where you don’t want them to be. Otherwise known as weeds, unwanted plants in a pasture can also be controlled through a combination of grazing management, maintaining optimal soil fertility, pasture seeding, and observing best practices for avoiding the introduction of weed seeds into fields. Organic graziers can successfully combat weeds, naturally.

According to John Duynisveld, of Agriculture and Agri-Food Canada, who spoke during a webinar for the Beef Cattle Research Council (BCRC), a weed may be palatable to livestock or it may be toxic. A weed may be a sign of grazing mismanagement or of depleted or compacted soils. A weed may be invasive, with the potential to rapidly dominate a pasture if not controlled early, or it may crowd out more palatable forage in the stand, more gradually over time.

But weeds aren’t all bad. They do have some redeeming features which smart graziers can use to their advantage. Weeds can provide an indication of what might be lacking in your pasture fertility, and they can often be successfully utilized as forage.

“A weed is a misunderstood forage, a repairer of soil health, an indicator plant of soil fertility,” said Troy Bishopp, aka The Grass Whisperer. Bishopp is not only a grazier himself, but also a conservation professional with the Madison County Soil and Water Conservation District and Upper Susquehanna Coalition in New York State.”

Weeds can and do provide a small amount of micronutrients to cows, and are generally best tolerated when they are in a vegetative state, Bishopp said. And cows can be trained to eat weeds, which can then decrease the weed’s ability to overtake a pasture. Managing weeds in this manner provides nutritious forages, reduces weed pressure, can avoid the use of costly inputs or chemicals, and can be an economical way of managing weeds in pastures.

Multi-species grazing is another way to manage weeds. If the cows won’t eat it, other livestock likely will. Sheep, goats and poultry all forage differently than do cows. Not only do they selectively eat different plants, with sheep in particular able to consume plants which are toxic to cows - such as tansy ragwort, but they actually bite into plants differently, too, and may eat different parts.

Sheep enjoy broadleaf plants, and can eliminate dandelions from a field by grazing in spring and fall. They will graze dandelions to the ground, leaving lush pasture forages behind. Broadcasting legume seeds will fill in the bare soil spots from the dandelions, and should outc-ompete any weeds the next spring, Duynisveld said.

Bishopp, too, promotes multi-species grazing as a means of utilizing all of the forages present in the pasture, and capturing their value.

“One might benefit from having a multi-species approach where different animals eat these said plants, formerly known as weeds,” he said.

Selectively using your cows’ actions to drastically reduce a weed’s ability to spread can be effective even on notorious weeds such as Canada thistle, but will take three to four years. Using animals to trample the weeds, via high stocking density grazing with upwards of 700,000 pounds of animal weight per acre, and multiple movements per day, can eliminate persistent weeds if the pasture is grazed tall, and plenty of residual is left. The cows do not have to consume the weeds in order to eliminate them. They may simply bite them and spit them out.

“The quicker you can get them on and off... one day or less...the more rapidly you’re going to get the effect you’re looking for,” Duynisveld said of this approach.

In areas under and around fencing, weeds will remain, but they will be eliminated in grazed areas that received intense grazing and hoof pressure. This technique is best done in seasons where the desired forages are strong, and can grow back and recover rapidly, so few bare spots are left for weed regeneration, and it will not work in wet conditions. Any bare patches of soil left should be monitored, to insure that desired forages are filling in the spaces, and not more weeds.

“Some form of strategic clipping, trampling or animal munching when the weeds are at their most vulnerable,” can combat weed proliferation, Bishopp said. “I have used portable animal attractants - minerals & watering points - to mitigate spot weed problems.”

While allowing cows or other livestock to graze and trample weeds can be beneficial, other non-chemical methods for eliminating problem weeds do exist.

Mechanically clipping weeds - if the problem is not yet too extensive - is another way to combat them. Clipping before seeds are set decreases their spread, and repeated cutting will weaken the plants, Duynisveld said.

“Generally, diminishing a weed issue can be done with an intense mob or trampling grazing event, a strategic pasture clipping regime or if bare ground is noted, a timely inter-seeded planting of an annual and perennial combination,” Bishopp said. “No-till a cocktail mix in to increase biology and competition and cover up bare ground. Full-tillage would be the choice of last resort! A combination of all approaches should be investigated before any action is taken. Does a field need more nutrition? Does it need better grazing management? Does it need a timely mechanical response?” ”

Using annual forages to smother out patches of weeds can be effective. Interseeding annuals, allowing them to take hold, and then intensively grazing them infrequently can almost eliminate even tough weeds like Canada thistle, according to Duynisveld. The next season, the annuals will have died out after smothering the weeds, allowing pasture legumes a competitive edge. 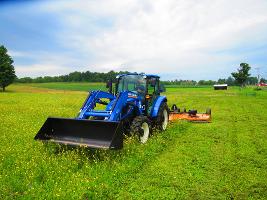 But before deciding how to control weeds, it’s best to discover why the weed issue exists in the first place.

“Mitigating is investigating the root causes of this proliferation. For me, taking on these weed issues comes down to a field-by-field assessment,” Bishopp said, adding that root causes of weed proliferation stems from overgrazing, poor soil fertility and bare ground.

Overgrazed pastures allow sunlight to reach bare soil, providing dormant weed seeds the opportunity to germinate. Wet, muddy soil is easily compacted by animals or equipment, and allows a “chance for seeds that you don’t want to come in and start to take hold,” Duynisveld emphasized.

Proper grazing management involves grazing periods which leave plant residual heights high, which helps to avoid the problems caused by bare ground or stressed plants. When grazed low, roots become weakened, and the plants’ ability to photosynthesis is diminished. Moving into the winter, strong roots are needed to insure a strong stand next season. If weakened plants aren’t able to regenerate quickly in the spring, weeds can take hold.

Planning enough recovery time between grazings, especially during dry or excessively wet periods, is needed to keep forages lush, Bishopp said. Carefully examining your stockpiling and outwintering protocols is warranted, too. He encouraged farmers to have a resiliency plan in place for sacrifice paddocks and heavy use areas.

“The biggest no-no is creating bare ground through some sort of overgrazing or weather event,” he said.

Soil fertility issues also encourage weed growth. When soil pH is outside of a 6.0 - 6.5 range, the competitive ability of desired forages declines, allowing weeds to thrive. Soil nutrient availability is affected by pH, and many weeds are adapted to thrive in low fertility soils. Dandelions, for example, thrive in low calcium soils, and in low pH conditions. They can rapidly crowd out other species, creating a weed problem.

“After looking at hundreds of pasture soil samples, lime/calcium is still one of the most limiting factors in maintaining proper fertility levels that keep weeds at bay,” Bishopp emphasized.

It’s important to properly identify the weed and understand its lifecycle, Mike Cowbrough, Ontario Ministry of Agriculture said during the BCRC webinar. Knowing when a particular plant is vulnerable, as well as when and how it spreads, should be your guide to targeting weeds. Attempting to control weeds at the wrong time can cause more problems.

Annual plants proliferate via seed, while perennials set seeds and use their roots systems to grow new plants. Each plant is most vulnerable at different times.

Some weeds have shallow root systems which can be easily dug up. But if you try to dig up wild hogweed, hundreds of plants will sprout from any remaining root pieces in the soil. Cutting this plant can work, but results vary drastically depending on when in its lifecycle the cutting is done.

For other plants, the timing of cutting can produce much different results. It can be a matter or trial and error. The goal is to trick the plant into thinking that is has already set seed, so it is no longer trying to do so. Experimenting on your own fields, on a small scale, to determine when to best target an invasive weed is recommended.

“On a small scale, you can easily see what works well, and what doesn’t work well,” Cowbrough said.

Renny Gritz, Conservation Resource Management Officer, also spoke during the BCRC webinar. Gritz said that preventing weed problems starts by not introducing weed seed into your pasture environment. Weeds can spread from road ditches, can be introduced on equipment, or can take hold in disturbed, bare areas of soil.

“If you can keep the weeds out...that is the best way to deal with invasive species,” Gritz said.

Weeds can be spread via equipment, clothing and livestock. If a field is weedy, exercise caution when moving livestock or equipment out of it and into other pastures. Equipment should be cleaned, and livestock may need to be kept out of uncontaminated fields for a few days, depending on whether or not the weed was producing seeds, which they could then introduce to other pastures. Bishopp also cautions farmers purchasing hay that viable weed seeds can be introduced into pastures via the feed.

“You may be buying in a weed crop you didn't have before,” he said.

Maintaining a lush sward of pasture forages is the best defense against weed problems. A healthy stand of desired forages can keep weeds from taking root. Proper grazing management, along with optimal soil fertility, is the prevention, and often can be the cure, for weed concerns.

For those seeking more information, Bishopp offers these words for wisdom:

“In the end, as a lifetime grazier, I always refer back to the awesome Jerry Brunetti and Fred Provenza for weed advice and their benefits and deeper considerations,” recommending this article for those seeking more in-depth information: https://www.nsfarming.com/Media/Jerry%20Brunetti%20-%20Biiodiverse%20Forage.pdf