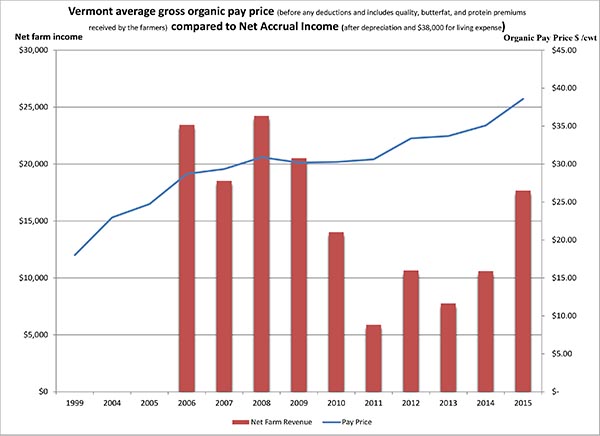 Sales of organic fluid milk increased by 5.7 percent in 2016 over 2015 with a total of 2,576 million pounds in 2016 compared to 2,433 million pounds in 2015. Most interesting is that sales of whole milk in 2016 were up 16.5% on 2015 sales. This, together with the continuing increase in interest from manufacturers wanting to use organic dairy ingredients, should be positive for organic producers. Unfortunately, the rush by buyers to sign up new producers, the drop in feed prices and the lack of consistent implementation of the Origin of Livestock regulation (and the USDA’s lack of a Final Rule) has caused an increase in production that has dwarfed the expected and easily predicted increase in consumption. The lack of a Final Rule on the Origin of Livestock has allowed large-scale dairies to rapidly expand their herds by cherry picking certifiers that allow continuous transition. This surplus has been caused by buyers encouraging higher production despite historical evidence that sales of organic fluid milk increase at an average of only 6-7% per year, as happened in 2016. 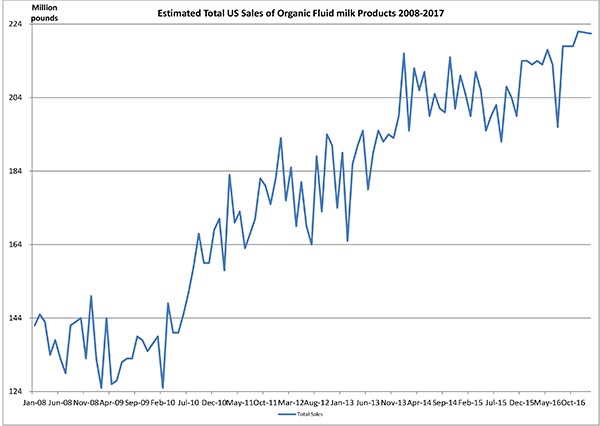 A surplus gives buyers more leverage on pay price, especially over those producers that sell directly to manufacturers and those who are members of smaller cooperatives and marketing groups. We saw this in 2009, and the same is happening again. A surplus should benefit exporters, especially of powder and product to Asia, but a strong dollar is inhibiting that growth as well as strong competition from Australasia and Great Britain. A surplus also needs increased manufacturing time at plants to save any organic premium by making organic milk powder and cheese. Manufacturers are at capacity with the increase in non-organic milk production of 1.8% from 2015 (2016 production was 212 billion pounds). Without any of these opportunities, any surplus organic milk will be dumped on the conventional market or just disposed of, especially since some Northeast conventional producers have been told to dump milk into lagoons because there is no capacity to handle it.

Organic milk buyers have responded to the surplus in different ways. CROPP has been the most active. They have dropped their pay price, re-instituted the seasonal deduction and implemented a quota based on the active base, except for those producing less than 270,000 pounds (herds of 25 cows and under), grassmilk producers and ‘foundational loads’(see CROPP‘s press release on page 14). CROPP has also initiated a large $20 per cwt deduction on over-quota milk, passing all the cost of surplus milk to the producer and leaving them with a pay price under the conventional Class IV price. WhiteWave (Horizon) has asked for a volume reduction of 3-4% and has dropped its pay price. Upstate has dropped $1 on their MAP and dropped their incremental growth incentive but retained their volume payments. Trickling Springs struggled to find manufacturing and entered a supply relationship with CROPP. 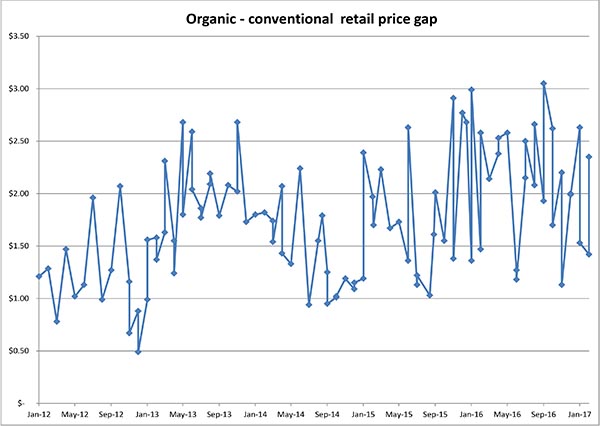 Quick solutions to this oversupply are not available, especially with a low price for cull cows. The surplus may well be exaggerated by the Danone acquisition of WhiteWave which will create the US #1 refrigerated dairy company (Nielsen AOC last 52 weeks: including butter, cream/creamers, margarine and spreads, milk, whipped toppings and yogurt and excluding cheese). Danone is increasingly confident about the deal going forward under the new administration.

Aurora Dairy is pushing hard for the expansion of its plant and farming operations against local opposition in Columbia, Missouri. Aurora officials are saying they will be adding 30,000 cows worth of organic production in Missouri and the manufacturing plant they will be building will be much larger than their present facility in Platteville, Colorado. CROPP and other smaller cooperatives will have difficulty competing for store brand sales against this vertically integrated, well financed, low cost company. 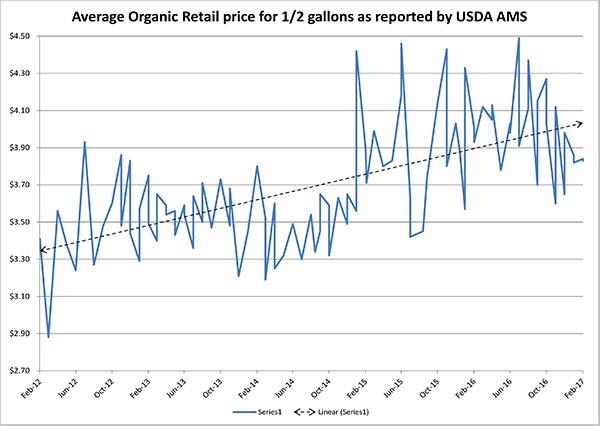 The CROPP/Dean joint venture may well be able to slowly build a larger consumer base for its HTST milk but that will take years rather than months and is no way certain, especially as the store door delivery that Dean offers encompasses many non-traditional retail outlets for organic product, for example package stores. The answer has always been more attention to supply management which producers have been asking for the last ten years, rather than rapidly expanding gross sales. WhiteWave appears to have paid better attention to that than CROPP.

Feed corn is still trading at $8 per bushel, about $1 lower than February, 2016, and soybeans are priced at $16 per bushel as compared with $21.50 in February, 2016. The last time the soybean price was this low was January, 2010. Organic hay costs are within the same range as last year, with hay being offered at $50 per round bale or $150-200 a ton FOB with a good supply. Cheap foreign feed still dominates the market and undercuts domestic producers. John Bobbe, executive director of OFARM, has noted that the farmers tell him the current cost of producing a bushel of organic grain is about $10 a bushel, while buyers have said it costs them about $10.50 a bushel to import it into the US, drawing complaints from domestic organic farmers who fear their harvests are held to stricter standards than foreign-raised crops. For the first nine months of 2016, the top two countries for organic corn imports entering the United States were Turkey with 400,000 metric tons (73%) and Romania (11%). Meanwhile, the leading countries for organic soybeans entering the United States during January-September 2016 were Turkey (47%), India (19%), Argentina (12%), and Ukraine (9%). (Source: USDA Foreign Agricultural Service data January-October, 2016.) 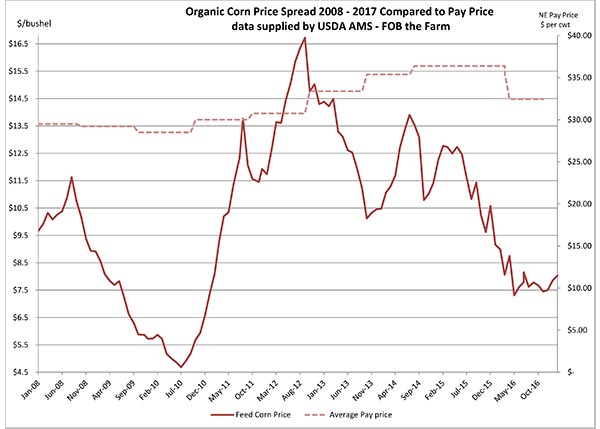 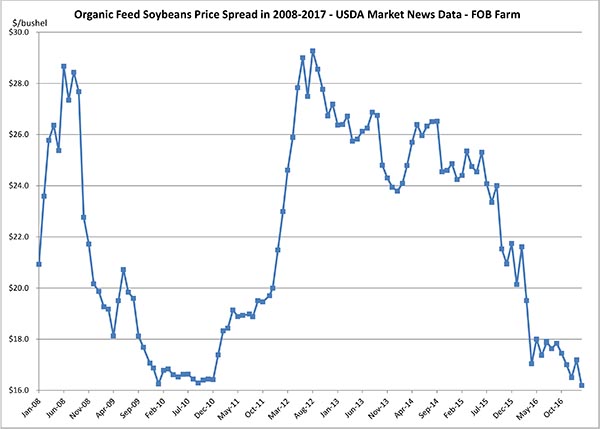