2010 Economic Data
The columns below do not represent actual farms from which data was collected, but are solely the average, minimum, maximum and median values for each line item.
Average Cost of Production
Average cost of production numbers for the 2010 year
expressed as per farm, per cow and per hundredweight
of milk (cwt)

Added November 13, 2011.The results for the 2010 organic dairy economic study are in and show a mixed picture for Vermont's organic dairy farms. Organic dairy farms in Vermont were profitable in 2010 but the real story is the fact that profits have been declining the past couple years. Since 2006, the return on assets has dropped from 4.2% to 1.9%. Accrual income after a charge for owner labor/management dropped from more than $23,000 to $14,009.
Judging from this year's data collection, one can assume that 2011's numbers will be lower than 2010. Costs continue to increase for repairs, feed, parts & supplies, labor, fuel, and taxes, while milk prices have remained relatively flat. And remember that the declining profits are after after a good dose of typical Vermont style farmer do-it-yourself conservative expense cutting.

For the 7th year, UVM Extension and NOFA Vermont collected economic data from 31 Vermont organic dairy farms. In 2010, the average farm of 55 cows earned a profit of $49,019 (median of $45,966) before any charges for family withdrawal which was calculated at $35,000, leaving on average a return of $14,019 of profits for reinvestment and paying real estate loan principles. The average farm shipped 13,224 lb of milk per cow (median 12,784) and received an average price of $30.32 per cwt (median $29.92). The return on assets was 1.93% (median 1.1%). The average is higher than median, indicating a few well performing farms are influencing the analysis a bit. Note that we have kept the family cost of living constant for the past few years. In addition, the study uses a conservative estimate for the value of land, cattle, and equipment.

While these figures may look decent for a single year, it continues a declining trend in profitability since 2006 when farmers earned $58,443 before family living and the return on assets was 4.2%. Milk price was highest in 2008 at $30.90 per cwt. With expected increased expenses, the profits from organic dairy will likely decline further without some increase in income.

This leaves farmers with the same decision they have faced as conventional dairy farmers; increase production per cow, add more cows, or consider getting out of dairy farming. This unsettling trend of declining profits makes it difficult to entice the younger generation to step up to become a steward of Vermont's rural farming landscape.

When one looks at the fine details, there are a number of changes from the 2009 year. Farms have now seen a return in a market for extra dairy cows as an expanding organic sector now has farmers looking for extra cows. Government payments remain a significant part of farm income, averaging $4783. These are from MILC, direct program payments for a few farms, and conservation grants. Direct payments, MILC ,and conservation grants are considered to be likely casualties of budget negotiations in Congress. So more than 92% of farm income depends on the sale of milk.

On the expense side, the largest expense continues to be purchased grain costs at $1013 per cow plus purchased forage of $86 per cow for total purchased feed cost of $1099. What is rather remarkable is that purchased feed costs are down nearly $100 per cow from 2009 and down $183 per cow since 2008. However, this decline is attributed more to feeding less grain than declining feed prices. While prices had declined a bit in 2010 they have rebounded and have been steadily climbing in 2011. Farmers are doing what is expected…managing protein levels and feeding less grain. Two farms in the study feed no grain at all (with a 9200 and 9500 pound milk average per cow). 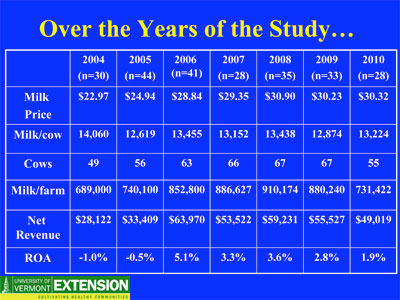 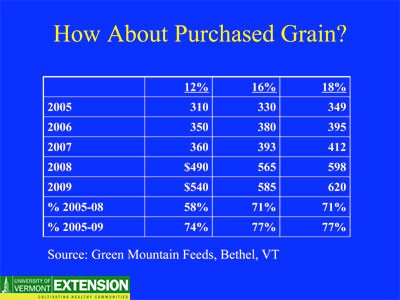 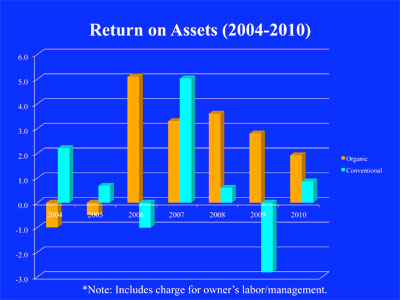 The second major area of expense is supplies and repairs, at $562 per cow. Not much need for explanation here as when was the last time a part or a repair labor charge went down? Other top expenses were labor at $381 per cow, utilities at $146 per cow, fuel at $142 per cow, and custom hire at $158 per cow. Interestingly, farmers spent more on bedding at $100 than for vet and medicine at $55 per cow.

Accrual adjustments for 2010 included an average of $16,476 per farm for depreciation ($302 per cow). One aspect that indicates the level of farm profitability was that prepaid expenses were down in 2010, likely because farmers did not have extra cash in December to prepay items and tax bills were not as large.

At the end of the 2010 year, organic dairy farmers earned $59,585 in cash income and $49,019 accrual income (after non-cash depreciation charges). When a charge for family living of $35,000 is applied, the farmers' net cash income was $24,585 and the accrual income was $14,019. From this amount, farmers had to pay real estate principal payments, reinvestments in capital and equipment, and pay taxes. They definitely didn't need to buy a bigger truck to haul the profits to the bank in 2010.

How did organic compare to conventional for 2010? Net farm income for small size conventional dairy farms as reported in the Northeast Dairy Farm Summary was reported at $480 per cow vs $898 for organic and return on assets was just barely positive at 0.8%. The conventional market has recovered a bit but farmers are not filling in the holes they dug to stay afloat in 2009.

What is more interesting is looking beyond the averages and looking at the differences between the farms. When looking at return on assets, 8 of the 31 organic farms had a negative return while 7 farms had a return greater than 6%. Fully 13 of the farms in the study did not achieve a $35,000 net farm income.

What does this information project for the organic dairy sector? There are not long term profits evident to allow for reinvestment. With rising expenses, profits will be expected to continue to tighten. More concern is that while the average farm is getting by, the median figures show more concern, indicating there are more farms doing worse than the average. Some of these farms are still suffering lingering results from the 2009 market quotas. IF there is a bit of good news in this report, it is that the Vermont organic dairy farms are still doing better than their conventional neighbors, explaining why there are still more farms interested in joining the organic ranks.

There is always a question of what the future holds. How will the organic dairy farms do in 2011 and beyond? There are a couple of points that can help shed some light on this question. First, farmers are adjusting their calving to try to shift production to the winter months when they can get premiums. This can significantly help net farm income. Second, most farms will be over the direct effects of the marketing quotas by getting their herds back up to optimum size.
But we have several points that will likely decrease profitability. First, no one is predicting MILC payments for 2011. Organic farms do benefit when conventional prices tank by also being eligible for MILC. This was a big help during the marketing quotas in 2009. But we can't expect any MILC in 2010 or early 2011. Second, feed prices have been hurting everyone. Farmers have been taking steps to reduce feed expenses by better forage management, cutting protein content, and lowering grain fed to cows and heifers. Third, other production costs continue to rise. The organic milk price, which has not risen in several years, doesn't cover these extra costs.

For 2010, the organic milk price would have to been $31.99 per cwt to give our average farm a 4% return on assets. This is $1.67 more than the $30.32 Vermont organic dairy farmers received in 2010 with seasonal and quality premiums and components. And a 4% return is not considered a high profit by the business world or by lenders nor an adequate return for the increased time, expense and work to be organically certified.

What would farmers need to cover higher feed costs and other expenses? Project a 15% increase in feed prices and a 5% increase in all other expenses (fuel, utilities, repairs and supplies, labor, vet, bedding, etc). If milk production stayed constant, the cost of production would increase by $2.10 per cwt. Our average farm would need a milk price of $34.11 to make a 4% return on assets. This is an additional $2.79 per cwt. This gives a question of how can organic farmers work to get the price they need to keep living reasonably and continue to dairy farm?