The importance of diversity

Biodiversity, the number and kind of living things in a particular area, is a hot topic. News stories and popular publications talk about the causes and consequences of biodiversity loss in natural systems. But what about in pastures? Can understanding and manipulating biodiversity help improve pasture and farm outcomes, or even the ecological well-being of the entire landscape?

Diversity has two components. The first, and easiest to measure, is species richness. This is simply the number of species found in a given area: ten species in a square meter, or thirty species in a pasture, or sixty species on a whole farm. The second component is called evenness. If a field has ten species but a single one makes up 98% of the biomass, that's intuitively not as diverse as a field with ten species that each make up 10% of the biomass. Calculating evenness provides a way to quantify that intuition. Most diversity indices combine richness and evenness into a single number, making it easy to compare different sites. When people talk about diversity, though, they most often mean simply species richness. It's much easier to count species than it is to measure abundances and calculate evenness or diversity indices.

A pasture has certain resources available: nutrients, water a d light. A single species can use some but not all of these resources, depending on how its roots are distributed in the soil, how its leaves are arranged, and whether it can fix nitrogen from the atmosphere or not. No matter how efficient that species is, some resources are left over. A second species could use more resources, and a third, and so on until all the available light, water, and nutrients are used up. If the species take up resources in different ways, a more diverse pasture will also be more productive because it uses a larger proportion of the available light, water, and nutrients.

A more diverse pasture has other potential benefits. With many species that use different resource components, in a stressful year there will still likely be something growing, even if not all of the species present can thrive. A diverse mixture may contain some species that begin growing early in the spring and others that persist into the autumn. A pasture with that kind of mixture will have a longer growing season than a monoculture, although its composition changes seasonally. If the resources available are all being used by forage species, there's nothing left for weeds, so a diverse pasture can also resist weed invasion. Species with deep tap roots like chicory can reach water and nutrients deeper in the soil, benefiting not only themselves but other species in the sward. Nitrogen-cycling legumes also help themselves and other species by increasing available nutrients.

It's impossible to design experiments to study pasture diversity without good background information. We carried out a survey of Northeastern pastures to characterize pasture plant diversity and composition. From 1998 to 2005, we surveyed 44 farms from Maryland to Maine. All farms had grazing animals, usually dairy cows. In 2-8 pastures on each farm, we collected information on plant species number and total cover, bare ground, and number and cover of each species present. We made complete species lists for a 0.25 acre area (1000 m2), and estimated species cover in ten smaller quadrats (11 ft2, or 1 m2) within the larger plot. We also collected soil test results, slope, elevation and aspect (for example, north- or south -facing) for each pasture, and annual precipitation and temperature for each farm.

Northeastern pastures are very diverse. We found 310 species of plants, though most of these were uncommon. The average number of plant species in a pasture was 32, but we found anywhere from 9 to 73. Nearly half of the species identified were native. Many of the most abundant species were forage species, such as orchardgrass, Kentucky bluegrass, tall fescue, timothy and red and white clovers. Other common species included quackgrass, English and common plantains, curly dock and dandelion.

Pastures are particularly vulnerable to weed invasion during establishment. The establishment of a weed-free, thick, productive stand is essential in obtaining high forage yields. We have conducted several studies in plots and in larger pastures to examine how plant diversity of mixtures affected weed invasion. In most studies, we found that greater plant diversity in pastures contributes to resistance to invasion by weeds. For example, in a grazing study, we found that pastures planted to complex mixtures of forages (3, 6, or 9 species) had fewer weeds than a simple grass-legume mixture. Pastures with a diversity of plant species resist weed invasion because of 1) a highly competitive environment created by greater use of resources by all plant species; and 2) the inclusion of a few highly productive species, which dominate the plant community and prevent invasion. 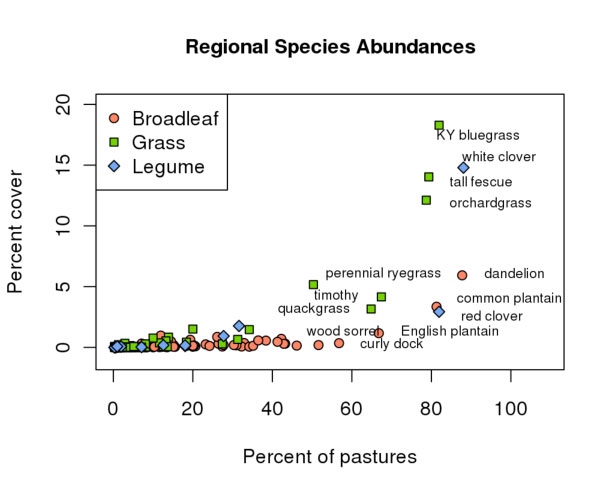 The plots with chicory were much more productive under dry conditions than those with other mixtures, and somewhat more productive even under wet conditions. The other five-species mixture was not any more productive than the better two-species mixture under drought stress. In the chicory mixture, white clover grew better and had better leaf water relations than in the two-species mixture, even in dry conditions. This finding suggests that chicory is bringing up water from deeper soil levels and losing some higher up in the soil where white clover can take it up. The researchers concluded that including a tap-rooted forb like chicory can improve forage yield, although it is difficult to maintain chicory for more than a few years.
Economics of diversity 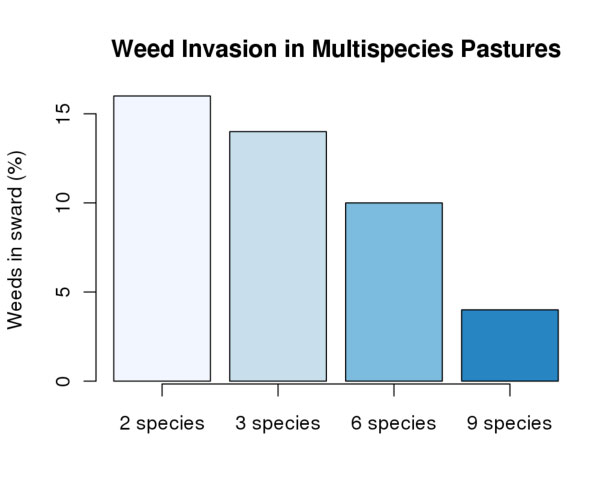 In an informal survey of 86 mixed-species pasture plantings on 56 farms, we found that about 30% of the plantings were to four or more forage species. Farmers were concerned about the economics of planting diverse mixtures. We researched the whole-farm economic returns from several pasture planting scenarios that varied in stand life. Our research showed that planting grass-legume or grass-legume-chicory mixtures increased net returns per cow compared with a nitrogen-fertilized orchardgrass pasture. The six-species mixture had a greater net return per cow than the two-species mixture, and the improvement increased with longer stand life. The greater forage yields of the mixture compared with orchardgrass fertilized with nitrogen reduced purchased feed inputs and in some instances increased the income by providing more forage sold off the farm.

Economic advantage (increase in net return per cow per year) of growing and grazing forage mixtures for dairy cows compared with nitrogen-fertilized orchardgrass.

We also conducted a whole-farm economic analysis to evaluate the short-term (2 years) and long-term (25 years) economics of altering forage mixtures and grazing strategies on a typical dairy farm. Results demonstrated using complex mixtures of up to 7 grasses and legumes increased net return by 15% in the short-term and 32% over the long-term compared with nitrogen-fertilized grass. Furthermore, forage mixtures had 30% smaller production risk. Thus, for dairy pastures, managing complex mixtures of forages is a valuable way to reduce production variability and increase profitability.

Planting and managing a single species might be the easiest approach, and possibly the most productive under ideal conditions, but how often do Northeastern graziers experience ideal conditions? A more diverse pasture can improve production in real-world conditions by using resources more completely, being more resistant to stress, and reducing weed pressure. But how to decide how many species and what they should be?

Our research suggests that a moderately diverse pasture of about six species is the easiest to establish and manage, and offers substantial benefits while still supporting good animal production. At a minimum, planting a grass-legume mixture makes it possible to take advantage of the different rooting depths for the two groups of species and the nitrogen fixation of the legumes. A more complex mixture might include several species of grass and legume, and possibly a tap-rooted species like chicory.

The easiest but most expensive method for establishing a diverse pasture is to plant a lot of species and let whichever ones can establish do so. That guarantees that the species that survive are adapted to the site and the management, but isn't the most efficient method. Choosing forage species that are adapted to particular site types, whether steep hillsides or damp streamside pastures, takes more knowledge but is likely to be more effective.

Some seed companies package mixtures of forages for specific uses, such as "intensive grazing mixes." If you want to use a commercial pasture mix, you should closely examine the forage species or varieties, and amount of each in the mixture to be sure that they fit your goals and management. Seed companies may change the components of mixtures from year to year, which makes performance comparisons difficult. It also means that the "intensive grazing" mixture a farmer bought one year ago is probably not the same mix available this year.

Grazing management must be adjusted to support the species that are planted. Keeping the grasses from getting too tall allows clover to thrive, while grazing too short or too often might eliminate orchardgrass or alfalfa. Rotational grazing with appropriate stocking rates can keep the stock from removing the tastiest species and leaving the rest by encouraging more even biomass removal. Rotational grazing will promote biodiversity by allowing a rest period for all species. Under continuous grazing, the more desirable/palatable species are constantly grazed, thereby weakening them and making space for weedy species to enter the
species or varieties, and amount of each in the mixture to be sure that they fit your goals and management. Seed companies may change the components of mixtures from year to year, which makes performance comparisons difficult. It also means that the "intensive grazing" mixture a farmer bought one year ago is probably not the same mix available this year.

Grazing management must be adjusted to support the species that are planted. Keeping the grasses from getting too tall allows clover to thrive, while grazing too short or too often might eliminate orchardgrass or alfalfa. Rotational grazing with appropriate stocking rates can keep the stock from removing the tastiest species and leaving the rest by encouraging more even biomass removal. Rotational grazing will promote biodiversity by allowing a rest period for all species. Under continuous grazing, the more desirable/palatable species are constantly grazed, thereby weakening them and making space for weedy species to enter the pasture. At the same time, less desirable/palatable species are not grazed, allowing them to proliferate.

Andre Voisin stated that "the cow is a gourmet." Treating your cows to a monotonous "meat and potatoes" diet of only a grass with a bit of legume thrown in not only insults their sophisticated palate, it may also cost you money in terms of lower milk production from pastures. The grazing season can be extended with planned plant diversity. Plant production increases with forage species diversity, especially in drought years, and this leads to increased animal production. Considering the many additional benefits of growing complex mixtures of forages, such as weed- and stress-resistant pastures along with greater stability of forage production year to year, why not give your herd of gourmets what they deserve—a rich, robust sward abounding in diversity.