By Anne Macey, with assistance from Lawrence Andres

On many organic farms there is little difference in approach between the methods used to rear dairy calves and those used on non-organic farms. Calves are separated soon after birth and raised in some form of individual housing only being grouped with others after weaning. The key differences, dictated by the Canadian Organic Standard, address welfare concerns:

In natural conditions calves have a strong motivation to suck; they form strong bonds with their mother and seek out social contact with other calves which provides the opportunity for play and the development of social skills. In order to meet these behavioral needs, an alternative to artificial rearing where calves are kept with the cows, is being increasingly trialed on European and North American organic dairy farms.

For the most part, research in North America has focused on the relative benefits of group versus individual housing and has not considered a suckling system where the calf is raised with its mother initially and then with a nurse cow.

This fact sheet provides guidance for best management practices to overcome potential problems with each of these systems. Regardless of the method used to raise calves, it is essential that calves ingest enough milk. The dairy code stipulates that calves receive 20% of their body weight of milk per day.

The experience of farmers and veterinarians who have worked with nurse cows indicates that their use warrants serious consideration by organic farmers and further research by the scientificcommunity.

Research results to date are few and are based on European examples using two different systems. One allowed restricted suckling on the mother for a 6-8 week period with machine milking, the other used nurse cows for 3-4 months with no machine milking.

The research and case studies in the literature reported the following advantages compared to other systems using restricted feeding:

In general farmers who have experimented with suckling systems prefer using nurse cows with two or three calves each over keeping calves with their own mothers. Given that each calf should have up to 8-10 kg of milk per day, the nurse cow should produce enough milk to support the total requirement of her suckling calves.

The experience of Canadian organic dairy pioneer Lawrence Andres provides valuable insights into the use of nurse cows. He started experimenting with this system 10 years ago and for the last 3 years has raised all his calves on nurse cows (an average 50 calves/year with 15 nurse cows).
The following summarizes his methods and his recommendations based on this experience:

Lawrence Andres has found the condition and vigour of the calves at weaning to be far superior to those he has raised without cows. They were also more disease resistant and better able to function in the herd and cope with changes. 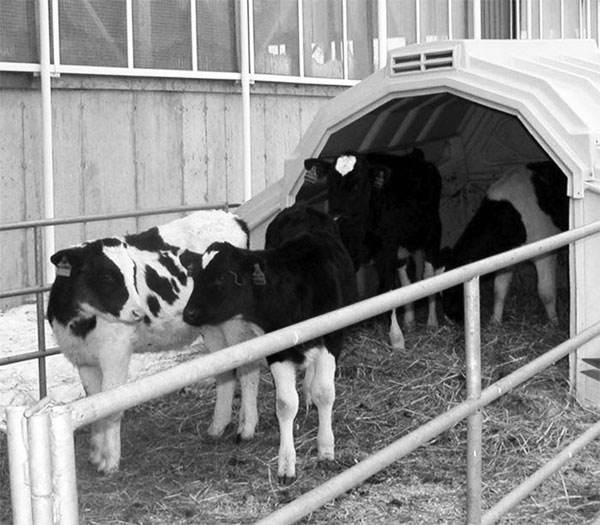 Calf mortality rates can be high (10% or more) from birth to weaning. Surveys have shown that diarrhea affects 10-35% of dairy calves and accounts for 14% of deaths. Respiratory problems are found in 8-15% of calves and account for 46% of deaths. Farmers should be concerned if mortality rates are above 2% and make adjustments to their husbandry methods.

When raising calves artificially, the quantity of milk fed is a key factor in determining the health and well being of the calf. They should be fed at least 20% of their body weight per day of milk or 8-10 litres/day for calves aged 1-28 days (1L= 1.03 Kg) using artificial teats not buckets. Calves should be encouraged to drink as much good quality colostrum as possible; at least 6L during the first 24 hours after birth and preferably 4L as soon as possible with a further 2L at or before 12 hours after birth.

Research has shown short term sucking has more advantages than disadvantages on production, health and behavior of both cow and calf compared with immediate separation after birth.(4) If the calf is allowed to suck for several days there are health benefits for the cow with reduced incidence of mastitis and placental retention. The disadvantage may be increased separation stress. After removing the calf from its mother, provide milk in three or four feedings a day rather than a larger quantity twice a day.

To reduce stress when weaning, gradually decrease the amount of milk over the last week and leave the teat for another few days (without milk) before removing it.

Whichever method of housing is used, a dry bedding area for lying is necessary. A minimum depth of 15cm is recommended.

Research has shown the following welfare advantages of group housing over individual housing:

However, concerns over the increased potential for disease transmission, problems with cross sucking which can damage undeveloped udders or aggressive interactions when competition arises at feeding, have limited the adoption of group housing for young calves.

Recommendations for dealing with potential problems: 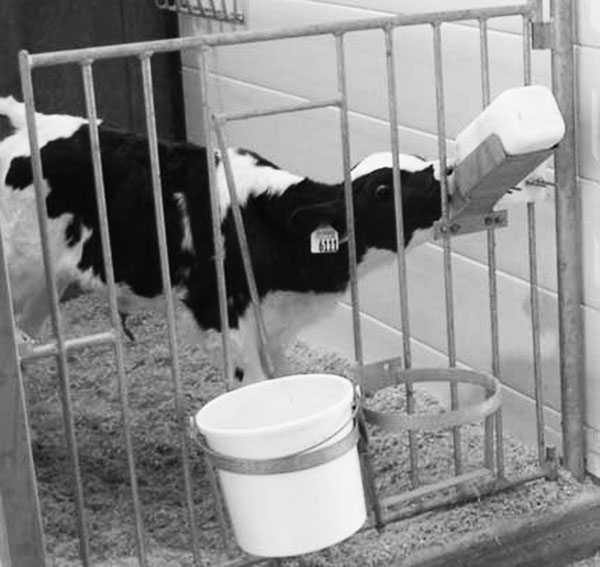 Although individual housing may simplify feeding and disease detection, this approach is being increasingly criticized because it limits the extent to which the calf can behave naturally. Individual housing is considered the least preferable option for organic systems in that it is the most restrictive with respect to natural behaviors.