Added June 5, 2010. If you’re tired of spending time and money to manage the same weeds year after year, here’s some good news. The solution may already be grazing in your pasture!

Since 2004 I’ve been training cows to eat a wide variety of weeds. Training takes 10 hours over 10 days and for an investment of $250 you can train a herd of 50 cows who will go on to train their calves and their herd mates. By the end of the summer, you can have an army of weed-eaters patrolling your pastures, turning a former foe into forage.

How do you train a cow?

The training steps I developed are based on discoveries by Dr. Fred Provenza and his colleagues about how animals choose what to eat, and on the decades of research by animal behaviorists on how animals learn. That sounds complicated, but I’ve condensed what they wrote into the following uncomplicated steps that can be adapted to fit any producer’s needs: 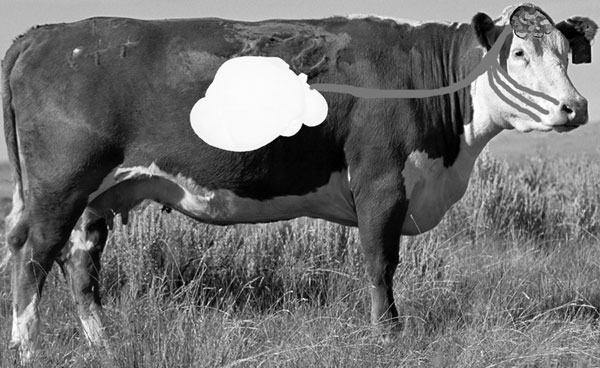 Nerves from the mouth, nose rumen meet in the same pathway in the brain so that creatures can link flavors and smells with nutritional feedback from foods.

Research shows that animals choose what to eat based on feedback from nutrients and toxins in their foods. The more nutritious a plant is, the more likely the animal is to eat it. Fortunately, most weeds are at least as good in nutritional value as the grasses our cattle commonly graze, and many are similar in nutrition to alfalfa. That means, that if I can get a cow to try it, she’ll like it, and she’ll keep on eating it in pasture.

After years of testing different weeds for nutritional value, my general rule of thumb is that if it is green and growing it is nutritious. So today, I spend less time worrying about nutrition and instead focus on making sure that the plant’s toxins are safe. All plants contain toxins, even vegetables we commonly eat like tomatoes and potatoes. At low levels, toxins simply reduce the amount an animal will eat of that plant. At extremely high levels plants may become “toxic” and cause death, abortion, or illness. Obviously I never teach a cow to eat a plant that can cause it harm.

I never worry about thorns and spines. Those “physical defenses” that harm us have not caused a trainee any problems, including Italian thistle with it’s 1/2 inch spines.

Younger animals are more likely to try something new than older animals, and females stay on the farm a lot longer than steers. I like to work with yearling heifers, but I’ve also found that cow-calf pairs learn easily as well. It’s important that all animals are healthy and are getting their normal ration, whether they’re grazing in pasture or being fed by you.

Save yourself some work. Train 20 to 50 and let them train their herdmates. In California 12 trained cows taught 120, and a herd of steers in Montana learned from the trained heifers grazing in the pasture next to them.

Animal behaviorists tell us that the more positive experiences an animal has with new things, the more likely it is to try other new things. So I begin by giving my trainees lots of positive experience with new things. Morning and afternoon for four days I give them an unfamiliar, but nutritious food, served up in a recycled supplement tub. The foods are simply bags of feed from the local feed store or coop. I make sure to choose eight different feeds with varying flavors, textures, and shapes. By the end of the second day, I’ve set up a routine that links, me and tubs, with good food.

On the fifth day of training I break the routine by skipping the morning feeding. In the afternoon, I pick weeds, mix them with one of the feeds they’ve already tried, and serve it to my trainees at the normal afternoon feeding time. I feed weeds mixed with a little less feed on the sixth day, and on the seventh day, trainees eat the weed plain.

I have found that educated cows are more open-minded about what food might be. Trainees in my projects have gone on to add all kinds of weeds to their diet. Science tells us that animals will generalize from a familiar thing to an unfamiliar thing and react accordingly. I translate this into what I imagine my trainees are thinking: “Well, if that was good, this might be good too. I’ll try a bite.” If you find your trainees aren’t trying everything you need them to, you can always bring back the training tubs for a quick refresher. 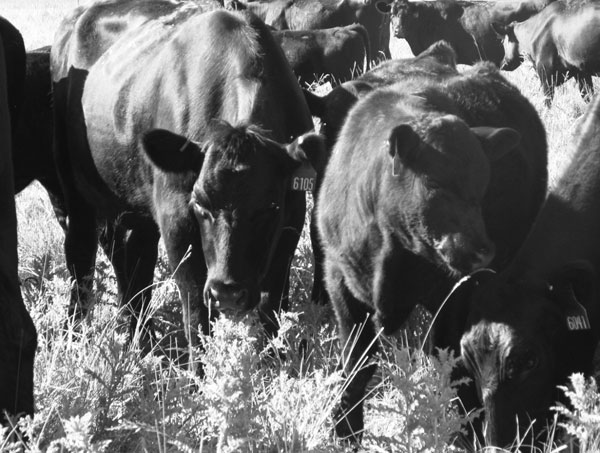 For this step I put trainees in a small pasture. Small means that there is enough forage for 1 to 2 days, including both regular forages, and the target weed. This encourages them practice the new skills they need to harvest the target plant on their own.

Manage Weed-Eaters to Meet Your Goals

Once your cows are eating weeds, they will eat them the rest of their lives, no matter the size of the pasture. How much of the weed they eat depends on the relative nutrition of everything else in the pasture and on how you’re managing them. You can manage them to eliminate the weed by decreasing pasture size and increasing the number of times the weed is bitten over the course of the grazing season. You can also manage for biodiversity, keeping in mind that those resilient weeds can be useful in drought times, and by providing good nutrition they could be part of a healthy grazing system when properly controlled.

Though meat quality and flavor don’t seem to change much for weed-eating animals, dairy farmers should probably manage their weed-eaters for potential changes in milk flavor. Plants with strong flavors can transmit those flavors to the milk and the more an animal eats of a strongly flavored plant, the more the flavor of the milk is likely to change. Your best solution for a strongly flavored plant is to make sure that there is plenty of other forage to mix with it.

There are a lot of resources on my website to help you learn more about how weed-eating cows can turn your problems into forage. You’ll find information on past projects, lists of what animals have eaten or can eat and responses to frequently asked questions. Just visit: