Over the past 5 years a joint project between NOFA and UVM Extension has examined the economics of organic dairy production in Vermont and Maine, with the study looking only at Vermont for the last 2 years. What we have found is an agricultural sector that experienced a surge in profitability and prices in 2006 only to see those profits erode by 2009. The study involved developing balance sheets and accrual income statements from participating farms that were paid for their assistance. 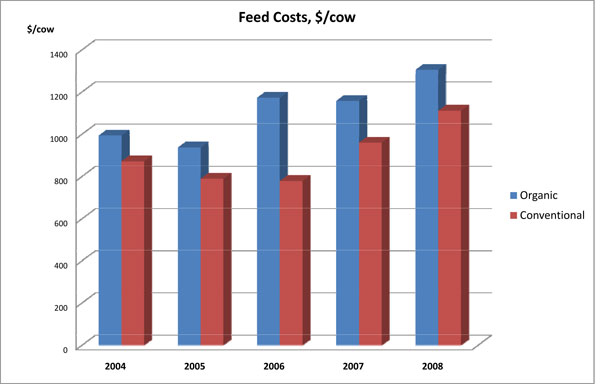 Some organic dairy farms have been able to earn extra income from the sale of extra dairy animals. One thing that a number of farmers are telling us is that their culling rates have declined by being organic, allowing them to raise fewer heifers for their own use and sell off extra animals. Sixteen of the farms in the study sold extra cows or heifers for dairy production in 2008.

The farms’ average gross income averaged $4,555 per cow. Farms that sold extra dairy animals had a higher income than the other farms. Obviously, farms with a higher milk production per cow also had a higher gross income, but higher production does not always translate into profit.

The expense side of the ledger is where the difference is made for farm profitability. Cash expenses per cow averaged $3271 and ranged from $4810 to a low of $1710 per cow. The lowest cost per cow was attained by one of the herds that fed no grain. Only 2 other herds were able to keep total costs under $2000. In contrast, the herd with $4810 expense per cow was the highest producing herd in the study. 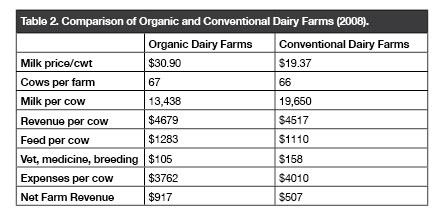 The highest cost for all but two of the farms in the study in 2008 was purchased grain. On average, the farms spent $1218 on grain and supplement feeds (no forage). By removing the farms that fed no purchased feed or the 2 farms that raised all their own feed, average purchased grain costs came to $1363 per cow. On average, 42% of total cash expenses were spent on purchased grain.
Other top expenses per cow were $476 for parts and supplies, $304 for labor, $180 for interest and $159 for gas, diesel, and oil. Managing expenses is very crucial and when looking at the expenses of 2 of the most profitable farms, these farms were below average in every expense category! And they were not the top production herds either!

One expense that has been going up in recent years has been depreciation. Frankly, organic farms have been making a profit so they have been able to replace equipment and make reinvestments in the farm operation. Depreciation per cow for the study farms averaged $472 per cow and ranged from a low of $66 to a high of $1017. Younger farmers were more likely to have higher depreciation as would be expected. Older farmers without a clear designated successor are much less likely to reinvest in buildings although they will keep their equipment modernized. 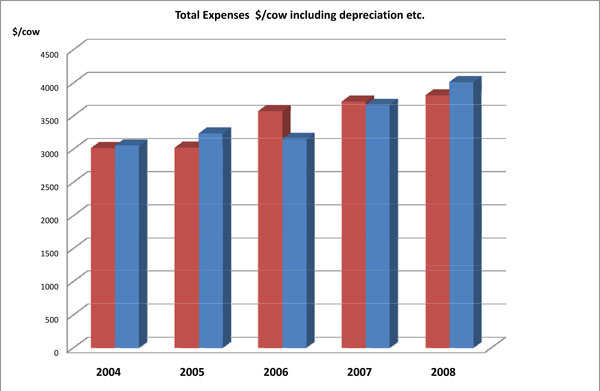 The bottom line is what counts and for 2008, the 35 farms averaged $917 per cow (before paying the owner for labor and management). Again we see a bit of variability with two farms showing a loss per cow after accounting for depreciation. With these farms taken out of the picture, the average net revenue jumps to $1010 per cow. 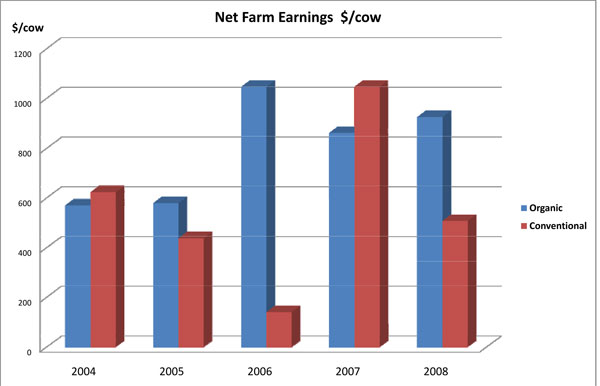 While looking at figures on a per cow basis is useful, we need to keep in mind that the entire farm operation has to meet family living needs. In this respect, net farm revenue per farm was $59,660. With dropping the two farms that had negative income for the year, average net farm revenue for the top 33 farms was $66,092. Of the 35 farms in the study, 2 farms had negative net revenue, and 9 other farms did not earn enough to support a $35,000 family cost of living. On the other hand, 24 of the 35 farms in the study earned more than $35,000 to support a $35,000 cost of living. We concede that some families draw considerably more and some less than $35,000 for family living but this is the figure we have used during the study based on comparable returns from the Northeast Dairy Farm Summary.

Where are we headed for this coming year? Compared to conventional, organic looks very appealing. But organic farmers are getting hit from several directions. First, base prices have been cut and some seasonal premiums and Market Adjustment Premiums (MAP) have been eliminated, although the milk companies are still paying a premium for winter milk of $3 per cwt.. On top of that CROPP has imposed a quota and Horizon has limited some farmers through changes in contracts requiring farmers to reduce milk production or, in the case of quotas, take major price cuts for over quota milk. These have hurt some farmers more than others but have hurt all organic dairy farms. On the expense side, some organic dairy farmers are paying more for hauling and stop charges. Although feed prices have declined a bit, other costs like repairs, parts, supplies, real estate taxes, and family living expenses continue to increase. Dairy farmers are also finding it difficult to find credit either through their lenders or their suppliers.

Combine the revenue and expense changes, and nearly every organic dairy farm will be facing lower income in 2009 and 2010. For a number of the farms, its going to be difficult, if not impossible, to pull a reasonable family living after paying production expenses. There is a need for greater income, either through a higher base price or leniency to produce more milk for farms to have long term survival. What will the market bear in 2010 is a challenge for processors, cooperatives and farmers.. I can almost guarantee there are no organic dairy farms planning to go back to conventional milk production unless forced to through losing their contract. Conventional dairy prices may, at best, approach break even this year. Under this prospectus, there are likely plenty of dairy farms willing to switch to organic if they could.

So the future remains clouded. Will we see a resurgence in organic dairy sales? Is the American consumer feeling more confident to spend more on organic milk and dairy products? Will we see a strengthening or stabilization of organic milk prices? There is a lot that remains unknown for the coming year and it will be challenge for organic farms to survive in this unknown environment.