Objective:
To study the impact of reducing grain inputs in an intensive grazing system on milk production, milk quality and income over feed costs. 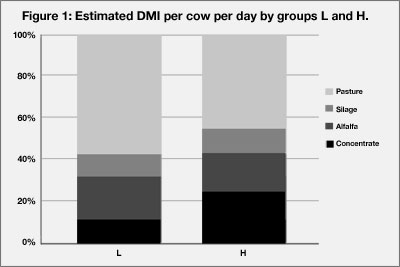 The old adage “less is more” can be applied to grain supplementation under managed intensive grazing systems where pasture quality and quantity are in good supply. In a recent study completed on the Organic Dairy Farm at California State University Chico, cows supplemented with grain at 12% of their dry matter intake (DMI) had a significantly higher economic return (as reflected in income over feed costs), as compared to cows supplemented at 24% of their DMI under an intensive grazing system. All cows were grazed on cool season pasture forages including a mixture of annual and periennial ryegrass, prairie brome grasses, brassicas and white clover.

Data was collected over the course of the four-month trial on seventy-five crossbred Jersey-Holstein cows that averaged sixty days in milk at the onset of the study. All cows were peaked at 14 lbs of grain, and then allotted to one of two treatment groups based on age and milk production.

Treatments included Group L: Low supplementation group fed 6 lbs of grain/head/day (n=36 cows), and Group H: High supplementation group fed 12 lbs of grain (n=37 cows). The average cost and composition of the ad libitum and supplementary feeds are illustrated in Figure 1. All cows had ad libitum access to pasture and water and were rotated into a fresh feed every 12 hours. Both treatment groups were fed equal amounts of alfalfa hay (8.9 lb DM) and winter forage mix silage (4.5 lb DM) in a feed bunk once daily in the evening. 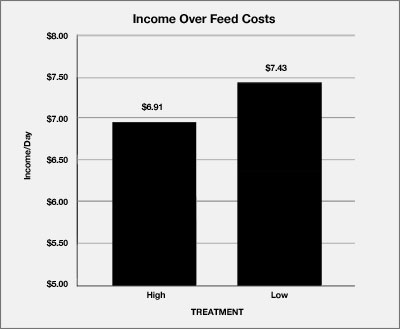 The concentrate used for supplementation was equal parts rolled corn and rolled barley and fed twice daily at the time of milking so that intake could be closely monitored. Daily DMI estimate was based off 4% of the herd average cow weight (1100 pounds) amounting to an average estimated DMI of 44 pounds per cow per day. The amounts of DMI from the alfalfa, winter mix silage, and concentrate were subtracted from the total estimated DMI to reach the estimated pasture consumption for group L of 25.32 pounds DM (58% of total DMI) and of 20.04 pounds DM (46% of total DMI) for group H. Both groups had a smorgasbord of mineral choices available to them at all times including macrominerals, kelp and trace minerals. 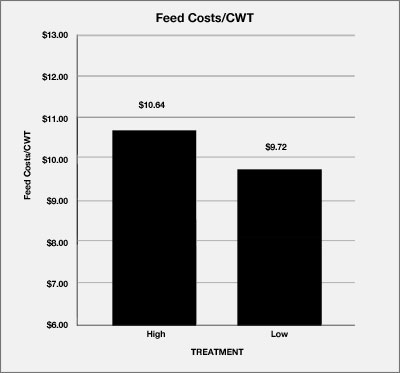 Feed costs were calculated to determine the cost differential between groups L and H. Analysis of Variance (ANOVA analysis) was applied to the quantity and quality components to establish income per day per cow. Milk yields were collected daily throughout the treatment period, data for quality and components were collected from the monthly DHIA reports and analyzed by cow and by treatment. Each cow was then assessed for Income Over Feed Cost (IOFC) which was measured in dollars per cow per day, as well as establishing Feed Cost/ CWT of milk produced. ANOVA analysis was used to determine treatment effects with respect to IOFC and FC/CWT between groups L and H and will represent our evaluation of overall profitability. Both figures reflect the difference between the price of milk and the cost to produce it (Bailey, 2007). The feed cost differential between groups L and H was calculated at $0.84 per head per day or approximately $25.20 per cow per month. These figures are down 24% from one year ago due to the decline in feed prices. The main portion of this feed savings is based on the lower supplementation rate in group L. The diet for group L consisted of 12% less concentrate and 12% more forage (from the pasture) than group H causing a cost savings because of the lower cost of pasture versus grain. Previous studies by Hanson et al. (1997) would agree, programs that utilize grazing have lowered overall feed costs.

Overall, there was no statistical difference between the mean pounds of milk yield for group L (48.34 ± 1.84) and group H (50.12 ± 1.82), there was on average 1.78 lbs more total milk produced per day in the H group receiving 12 lb of grain/day as compared to cows receiving 6 lb of grain/day. Interestingly,the additional 6 lbs of grain produced only 1.78 lb of milk. If our milk is worth $0.24/lb and our grain costs $0.21/lb, we are spending $1.26 and getting $0.42 in return.
McEvoy et al., (2007), with the Dairy Production Research Centre, Moorpark, Ireland, conducted a similar study where he found at higher forage intakes (17 kg DMI = 38.25 lbs) there was no difference in milk production between cows receiving 3 kg (6.75 lb) grain and those who consumed 6 kg (13.5 lb) of grain, using Holstein cows. We did not detect differences in components including protein, fat and solids non-fat, or in somatic cell counts.

Income over feed costs (IOFC), was not different between groups H and L ($6.90 vs $7.42, respectively for the High and Low grain treatments). While there is a $0.52 cent advantage for the low grain group, there was not adequate numbers to establish a statistical difference, nonetheless, for a 100 cow herd, there would be a $52/day advantage to the low grain group.

A key finding of this study was that decreasing the concentrate supplementation levels from 24 to 12 percent of DMI was shown to have little impact on milk yield or milk quality in an intensively managed, pastured based dairy with high forage quality, resulting in a higher net profit/cow.
Our study shows that forages can be a suitable substitute for grain inputs under intensive grazing management where pastures provide ample high quality vegetation.

These preliminary results show that the income over feed costs can be significantly greater for the low supplementation group (L) making intensive grazing a potential solution for organic dairy farmers with access to high quality pastures. Anecdotally, it was noted that cows supplemented with additional grain grazed less. We concluded that cows supplemented with the higher grain diets were less efficient grazers, making them more dependent on expensive inputs rather than motivating her to get her own.

Given the outcome of this 4-month study, it is clear that a longer study of this nature would be the next step. A 2-3 year study specifically designed to address the impact of low versus high grain (treatment groups recommended would be 0,6,12,18) is recommended that could report on net profit to include a full economic assessment (milk, reproduction, health, etc). The only barrier to keep this study from happening right now is funding.