Added January 31, 2010. The focus of modern sustainable agriculture is constantly evolving. In a world where dairy farmers have given way to ‘grass farmers’ and more recently ‘carbon farmers’ the needs and challenges of modern culture are coming full circle to the cycle of life and fertility that starts in the soil. As we look to the soil as a reservoir to moderate the effects of climate change as well as ‘the foundation of civilization’ (Thomas Jefferson), it becomes increasingly clear that the act of soil building is probably one of the most important legacies we can leave for future generations.

Having recognized this critical need, we are seeing a modern resurgence in interest in the work of P.A. Yeomans and his Keyline Design and soil building systems. Keyline is a term coined by Australian mining ecologist P.A. Yeomans to describe a regenerative land-use and design system informed by a thorough analysis of the ecological and topographical characteristics of a site. First described in print in 1954, Yeomans developed a holistic land care strategy that helped create resilient farmscapes and communities with deep fertile soils; secure yearround access to water; and
an economical and ecological layout. Probably Yeomans’ two best-known contributions to the world of agriculture include the development of interconnected networks of earthen dams which provide access to gravity fed flood irrigation, as well as the rapid development of topsoil using a subsoil plow and conscious, intensive land management. It is this dramatic potential to modify the character of the soil profile that is today gaining considerable momentum in North America and beyond.

Having recognized that the crucial elements necessary to maintain a healthy, biologically resilient agriculture are in many ways as simple as air, water and sunlight, Yeomans developed a version of a rigid-tined subsoil plow that decompacted abused soils, dramatically enhanced water infiltration and oxygenated subsoils. In practice, when drawn through the soil, subsoil plow shanks (the deep ripping components of a subsoil plow) create minimal surface disturbance and mixing of soil layers while shattering compacted soils, thereby setting the stage for the development of a healthy
biological soil community. 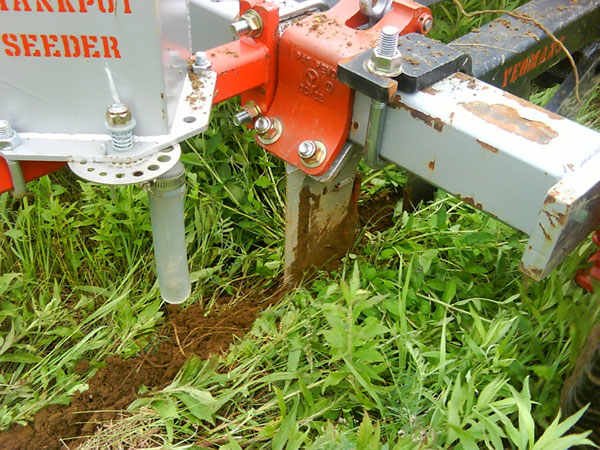 Helping further repair degraded landscapes, another crucial insight developed by Yeomans is what’s known as keyline pattern cultivation. The term ‘keyline’ actually refers to a physical point in the landscape - the contour line that passes through the ‘keypoint’. This is the place in a valley where the slope changes from being convex to concave in profile. Without attempting to describe this patterning verbally, essentially Yeomans found that by orienting the rips of the subsoiler parallel to the keyline, it is possible to more evenly distribute water throughout the landscape, effectively ‘draining’ the valleys and humidifying the ridges. Again, it is little more than the careful and conscious orientation of the subsoil rips that enables the farmer to develop a more even water regime, setting the stage for rapid topsoil development, especially in dryland ecologies.

To this point, we’ve simply discussed the mechanical, restorative components of keyline soil building techniques. Subsoil plowing is intended to serve as a rehabilitative strategy, typically carried out twice annually for a period of about three years. And again, it functions to generate the conditions needed to establish a healthy soil biology. The next step, and the most important, is the mineral and nutrient cycling that follow as a result of careful, conscious land management.

In his original work, Yeomans found that mowing pasture grasses just prior to seed head formation (boot stage), caused what he believed to be a corresponding root die back, freeing up abundant organic matter for soil biology. This organic matter is consumed by soil life, cycled through the soil
food web, and ultimately converted into stable, mineral-rich humus. Today, several
of the world’s cutting-edge graziers and land managers instead find that livestock play a much more crucial role in this soil building process than what was found by Yeomans, and it’s actually through holistic land management and intensive grazing systems (following keyline subsoil plowing) that the soil building process is kick started. 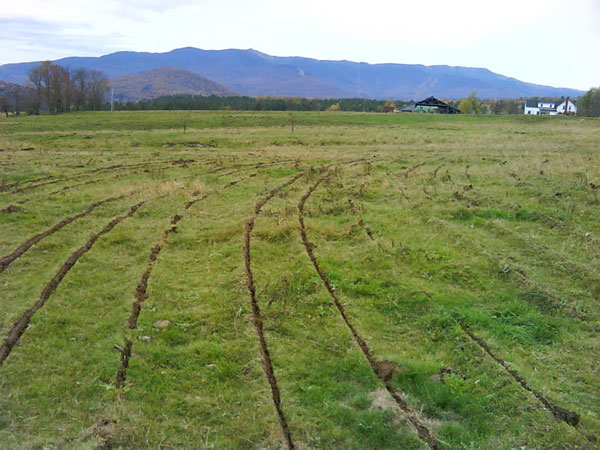 Modern biological research attributes this humus development more to the symbiotic relationship between soil biology and plant roots than to the release of organic matter resulting from root dieback as originally theorized by Yeomans. Essentially, plants actively devote a significant portion of their energy reserves to their roots (about 60% in grasses), of which approximately 50% is released in the form of exudates - simple sugars, proteins and carbohydrates. These exudates are what microbiologist Dr. Elaine Ingham refers to as the ‘cakes and cookies’ for soil biology. So very literally, plants are directly engaged in a cooperative relationship with beneficial soil biology in the root zone,
which break down inorganic soil minerals and convert them into a plant available form - exactly where the plants need them! And as we enhance the growth cycle of pasture plants making even
better use of available solar energy, this biological activity is further enhanced, creating more humus and sequestering more carbon.

While numerous other soil enhancement strategies have considerable potential to integrate with keyline soil building, the application of aerobic compost tea (ACT) directly into subsoil rips is probably one of the most exciting means of making the most out of a tractor pass. ACT is essentially a compost-based brew of biological life, which can be applied as a soil drench or to the foliar surfaces of plants. Starting with a small quantity of healthy, biologically active compost, ACT is produced by suspending a mesh bag of compost in pure water and vigorously oxygenating for 24 hours (or more depending on batch size). The bubbles produced by the aerators literally tear soil biota from the surfaces of the compost, suspending them in solution. After brewing, ACT must be applied to soils or leaf surfaces within one day (the sooner the better) so as to inoculate the surfaces with beneficial aerobic biology. A gallon of this highly concentrated solution is enough to cover an acre. Because the soil building process is largely reliant on the action and life cycles of the soil biology present, the coupling of keyline plowing with ACT application is an obvious match.

Healthy food, healthy agriculture, healthy communities and healthy economies all begin with healthy soil. Very few of our agricultural landscapes today are in a state we might call ‘healthy’, but as we work to repair the damage that has been done by generations of destructive land use, the amazing potential to heal these landscapes and cultivate thriving biological, mineral and water cycles and agricultural systems becomes increasingly clear.

Mark Krawczyk is a permaculture educator and designer, agroforestry and tree crop enthusiast and is passionate about working to build topsoil and heal landscapes. He owns and operates Keyline Vermont - an ecological design, consulting and installation company that also provides contract keyline subsoil plowing services. He can be found on-line at www.keylinevermont.com and can be
reached at keylinevermont@gmail.com or 802-999-2768.