Added January 11, 2010. In a recent Weston A. Price Foundation (WAPF) “Nourishing Traditions All Thumbs Book Review” article describing “Devil in The Milk: Illness, Health and The Politics of A1-A2 Milk”, a statement was made that has been repeated often and is still erroneous. The reviewer states that “old fashioned” cows … (such as Jerseys, Asian and African cows)” are called A2 cows and have the original beta-casein amino acid configuration. He also states that “more modern breeds like Holstein” are called A1 cows. Many WAPF farmers and raw milk consumers have used this statement as guidance in selecting cattle or milk supply sources. 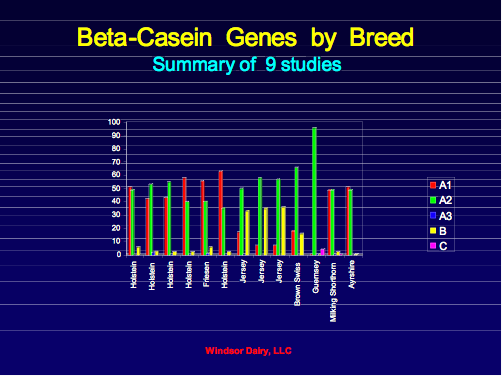 Keith Woodford, Devil in the Milk author, correctly states that all European cattle breeds are relatively recent and the dairy breeds originally all belonged to beta-casein group A2. The point mutations that resulted in subgroups A1, B, and C (not just A1) all include an alteration of proline to histidine at the 67th amino acid in the 209 amino acid chain that is bovine beta-casein. These cows are referred to in shorthand as A1 in the text. These subgroups, but not A2 or A3, would be classified as “bad” according to the theoretical ability to be cleaved and form beta-casomorphine-7, BCM7. Both A2 and A3 gene polymorphisms would then be considered “good” and are called A2.
Lumping these subgroups together, it is unclear that the Jersey, ranging from 50 to 57% “good”, is superior to the Holstein, ranging from 35 to 57% “good” across 9 studies on 3 continents (see Graph 1). This is because Jerseys range from 33 to 36% B beta-casein and this number must be added to the A1 group to determine what percent have the mutation of concern.

Ranking of European dairy breeds from “bad” to “good” based on a large California study directly comparing American cattle breeds, would be first Holstein, then Milking Shorthorn tied with Jersey, then Brown Swiss and finally Guernsey (see Graph 2). There is a mixture of types within each breed that is consistent across herds and studies. Because of this, Woodford in his book recommends testing of individual animals. If one were to bet on a breed with the “best” beta-casein type it would be the Guernsey with 96% “good” genotype.

Please see our complete “A1-A2: The Devil’s in the Details” Powerpoint presentation, available in PDF format at the bottom of the page 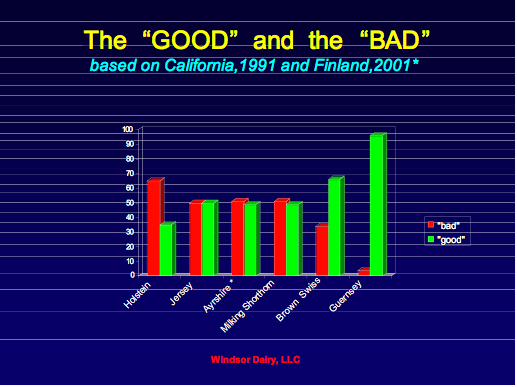 Questions and opinions about A1-A2 milk

Q 1. Should A1 milk be a concern for me and my family?

If you and your family are healthy, and dairy is part of your complete diet, the concern level we suggest is very little concern.

But, if you have a family member that suffers from leaky gut syndrome, then we suggest that person avoids A1 milk, if possible.

Q2. What breeds of dairy cattle typically produce the lowest percentage of A1 milk?

Ranking of breeds based on published research shows that the ranking is as shown below for the six most common dairy breeds from least to most A1 genetics (from least to most for potential BCM7 production with digestion):

Q3. Can individual cows differ from the average for a particular dairy breed?

Yes, individual cows can vary from the average for a given breed. Cows can be genetically tested for beta-casein genetics so you can know more about the potential risks. Testing is costly, averaging about $100-$125 per cow.

Q4. Do species other than cows produce A1 milk?

Humans, goats, and most mammals produce only A2 type beta casein in their milk. All cows were of the A2 beta-casein genetics until the mutation occurred to give us both A1 and A2 types.

Q5. Are there other possible digestion breakdown products from milk that are of concern?

There are 527 known biologically active amines that are the result of digestion of food proteins. Whether they are good or bad for us is largely unknown at this time. There are other casomorphins that have been identified: BCM9, BCM 13, and BCM 21. (We have not investigated these in the literature yet.) Some casomorphins, as an example, have positive effects on the intestinal intraluminal immune system in our bodies.

Q6. Have we tested the Windsor Dairy milk cows for A1 milk?

No, we have not tested our cows for A1 milk. Our herd is made up of almost every breed of dairy cattle available, but is predominately Brown Swiss in origin. Brown Swiss would rank second from the best dairy breeds for the most “A2” milk production genes.

Drs. Meg Cattell and Arden Nelson are Diplomates for ABVP – Dairy and owners of Windsor Dairy, LLC in Windsor, Colorado where they produce raw milk and raw milk cheese. Dr Cattell is also the Northern Colorado Chapter Leader for the Weston A Price Foundation (www.windsordairy.com).