Thinking Outside The Fence

Willow Creek Farm of Belmont NY, looks similar to other grazing dairies in the Northeast; cows grazing or resting in sloping pastures waiting for milking time. The big difference is that these cows don’t wait for milking time. They can walk back to the barn to be milked at any time they choose. At present the herd is choosing to being milked 2.8 times daily by two Lely robotic milkers. Chuck Diechman, owner operator of Willow Creek, programs the number of milkings for each of the 75 cows into the robotic milkers. The number of milkings is based on the stage of lactation and the cow’s production, any where from two to four milkings per day. He has been very happy with his decision to go to robotic milkers. Chuck estimates that they have increased his cow’s production 6-7 pounds per cow and they have cut his daily chore time in half. These two benefits alone will pay back his $210,000 investment in less than 7 years. Even though he is happy now, making the decision to purchase the robots was not an easy one, due in part to the amount of the capital required for the purchase but also the unknowns such as: how would the cows react to being milked by the robots; Willow Creek is certified organic, how would his certifier and milk purchaser react; and one of the biggest unknowns, was that robotic milkers have traditionally been used in confinement operations, would the cows come back from his pastures to be milked? His system is one of the first in the US to be on a grazing dairy.

Chuck and his wife Julia, a teacher, purchased the farm from Chuck’s father in 1995. The barn was modified to hold 36 cows in tie stalls. In 2001 he added a coverall building with 80 stalls. He milked the cows in shifts in the tie stalls for five years. By 2006, cow numbers were up to 60 and Chuck felt his knees were giving out and chores were taking 6-7 hours per day for him and a full time employee. His strongest motivation for a change was family time, there wasn’t enough of it. At that time he had four children aged 3, 6, 8, and 10. Something needed to change so that he could increase his family time.

When he looked at the addition of a flat barn parlor into his existing tiestall with up-grades to his milkhouse, the cost was around $90,000. The parlor would shorten his chore time by 1-2 hour and relieve the stress on his knees. Chuck had read about dairies using robots and decided to price one for his dairy. The amount of time saving was much better with the robot. The cost was $165,000. When he went to his banker with his comparisons the banker remarked, for the extra money that a robot cost, it was still “cheap labor”. Typically one unit handles up to 55 cows milking. Chuck had the first unit installed in June of 2007. His cow numbers were at the maximum for the single unit so he ordered another unit that was installed in July of this year. The robots are tail to tail, all cows have access to either robot. Some cows don’t care which one they go through, others have a favorite. He will train all new heifers to the robot that is being used less. The robots are located along the ally of a three row existing greenhouse barn. The cows at Willow Creek are mostly Holsteins with a few Jerseys. One of the benefits of the robots is that it can handle a wide variety of cow sizes. The units remember how each cow stands in the unit, her udder position and teat placement. They are now producing 18,000 lbs of milk per year, up from less than 17,000 before the robots. During this grazing season the cows averaged 63 lbs /day. 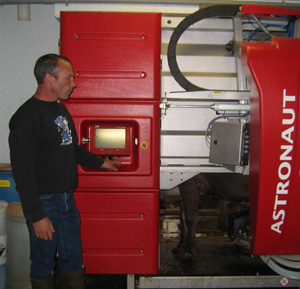 Robots vs. Hands On

Horizon Organic purchases Chuck’s milk and he was concerned there might be negative response to robotics in organic but the company encouraged him to proceed and has been interested in his progress. Chuck was asked by an organic farmer at a recent field day at Willow Creek, “doesn’t he find that the elimination of the constant touching of the animals at milking time effect his abilities to identify a cow who may have a health issue beginning?” Chuck replied that with the daily reports the robot prepares, he has even better tools for diagnosing herd and individual cow health. Some of the measurements that Chuck can check at the monitor in the barn office next to the robots or at another screen in his house:

Each cow wears a transponder on her collar. The unit tracks and stores all information on a computer. With this information Chuck can tell if a cow is beginning a stressful time if her production drops, or her temperature changes, or her times visiting the unit varies.

Chuck was asked how the units affected his cows grazing, “I feel that my cows get as much from grazing as they did before the robots. I have always allowed them to come back to the barn if they want to. If I am not providing them better forage in the pasture than what I have in the barn, they come back. This is how I communicate with my cows, I watch them and they tell me how I am doing. I know some folks in the Netherlands are feeding only grass and are using it as an incentive to go through the robot. There are many ways to do this and if you want to graze it will work if you make up your mind to do it. Just like anything else, you will only get out of it what you put into it.” Dry Matter (DM) from grazing has been the same since before he started using the robots; 90% DM in early spring, 30% during the hottest months when cows only go out at night and then 50% during the late summer and fall.

When the cows come back to the barn from pasture they are prevented from going back by one-way gates, the only way out is through the robots. When the cow enters the robot, the computer will determine if they are in need of being milked, if they are, it will give them a portion of their grain and milk them. If the cow doesn’t need milking she will get no grain and they will be released to the laneway. They continue through a one way gate to the pasture. From there Chuck uses manual gates to direct them to one of five different grazing systems on his farm. The furthest pasture is about a half mile away. Cows returning from pastures can be affected by the condition of the laneway and the number of turns the cows have to make. Chuck realizes that closer pastures work best for a robotic system. He described the ideal situation would have the milking barn centered in the pasture system with a long driveway for the milk truck to reach it.

Willow Creek is located in a high valley of western NY. They have tried to grow corn 7 years in the past 30. Five times the corn was frosted before it ripened. For that reason Chuck doesn’t grow any grain crops, he instead has put a lot of management into his grass production, harvesting, and feeding. They do most of their first cutting as baleage. This is sampled and stacked in specific areas where it can be retrieved as Chuck feels that it would fit his feeding plan best. He feeds some baleage all the time in the barn. His mixer can process two bales at once. He will decide what level of quality he needs to compliment his pastures. In early spring he will place two of his lower quality bales in the mixer. As the quality of the pasture goes down he will use one of higher quality bales to go along with a lower quality bale. When pasture is gone he uses two of his higher quality bales. This year Chuck tried a pea and oat mix as a nurse crop. He has enough of this mix to use one a day during the winter months.

Grain dispensed by the robots is an 18 percent pellet. Chuck programs the units to feed 1 pounds of grain to 6 pounds of milk during the pasture months and then reprograms them to give 1 pound to 4 pounds in the winter months.

Not Without its Glitches

Training the cows was not much different than transitioning any herd to a new milking system. It took full lactation to train the whole herd, but most cows went through by themselves within a few weeks, it was that special few that need the full lactation. Chuck or an employee put the few that won’t go through on their own into the robot while they are maintaining the stalls in the freestall. These few cows don’t resist, they simply need an escort up to the gate. No cows have been culled due to their inability to use the robots.

An attendee at the field day who was somewhat cynical of the new technology asked Chuck if there were no problems with the robots. “Give me a break....Tell me what doesn’t break down when you least want it. It is quite reliable. Most of the alarms are from my own error. I don’t get many alarms that actually shut down the system and when I do, it is usually pretty easy to correct.” No technology is without glitches; barn cleaners, tractors, silo unloaders, they all have weakness. A good manager realizes that they need to understand the technology to prevent glitches. Robotic milkers are no different just more complicated. The robots are set to call Chuck’s cell phone and alert him if there are any major deviances from set parameters. He will get a call if the wash system is out of soap, the vacuum is incorrect, or a cow hasn’t gone through the units in 14 hours.

Chuck can now attend his children’s soccer games, attend events and meetings further from home. Chuck tells the story that last year he attended a high school reunion. He had a call on his cell phone, when he told his friends that his robot was calling, no one believed him. The message said that the unit was out of soap. Chuck was able to reset the unit from his phone, it continued milking and he refilled the soap when he got home. He figures chores take only half the time they used to and he can do them quicker but enjoys the opportunity to do a better job with the calves and the cows stalls. Not being confined to a parlor during milking time also allows Chuck to work with his children around the farm. They are now ages 12, 10, 8, and 5. He appreciates this time which allows the children to feel more of a part to the family operation. Chuck’s decision seems an easy one now but when there were the unknowns, the weeks of holding the cows in the robot unit, and then having to milk in the tie stalls too, he wasn’t so sure he had made the right one.

To see if a robotic milker would fit your farm’s future you can go to:

to fill out a spread sheet to help you with the cost and benefits of adopting this new technology.