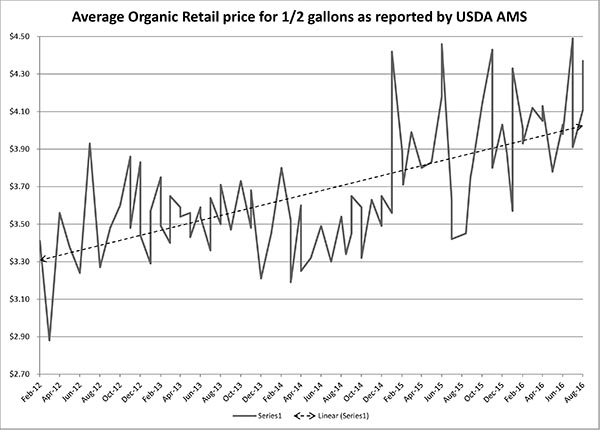 Following some months in 2015 when organic milk production seemed to have slowed, or even declined, 2016 has been a good year for growth in production. Recent efforts to increase numbers of organic dairy producers, by some processors, are now generating increased organic milk flows. NOFA-NY LLC is currently working with the largest group of transitioning farms since the rule change which mandated 100% organic feed for a full year to transition. They currently certify 312 dairy operations, 22 of which are grass-fed certified as well. Transition numbers are continually growing, with 55 farms in transition and an additional 13 farms looking to bring in organic animals to start shipping organic milk. Grass-fed is on the rise too, with nine farms pending certification through NOFA-NY. AMS reports total organic milk products’ retail sales for June 2016 of 217 million pounds, were up 6.7% from June 2015, and up 5.6% from January through June, compared with the same months of 2015. Total organic whole milk products retail fluid sales for June 2016, 78 million pounds, were up 16.2% compared with June last year and up 16.3% January through June compared with the same months of 2015. 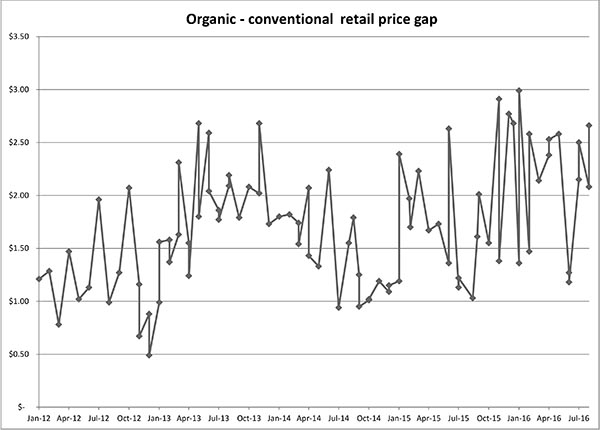 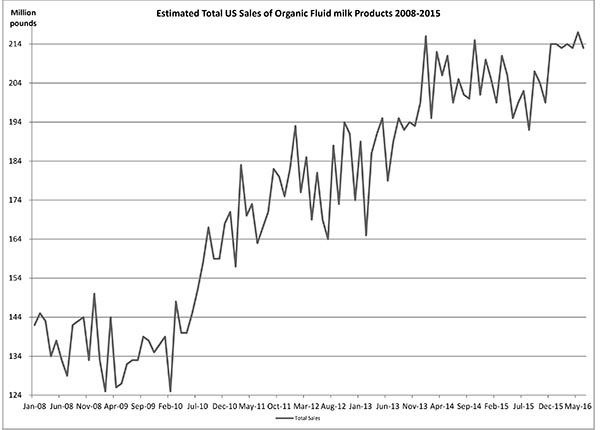 One of the casualties of the proposed merger between WhiteWave and Danone is that WhiteWave is not able to take on any more transitional producers while the merger is completed. It is also reported that none of the major companies are taking on new producers as supply is long in most areas. Organic Valley told its members that they have been oversupplied in the Northwest for quite some time, with much of that surplus going into powder. Now they have invested in bricks and mortar to help solve their problem. In a break with their past practices, Organic Valley has purchased the Farmers’ Cooperative Creamery facility in McMinnville, Oregon. The plant has primarily processed conventional products but has processed organic NDM and butter under contract. Organic Valley has been slow to purchase real estate preferring to contract with others for processing requirements and has no plans to purchase any plants in the northeast. Organic Valley farms in the Northwest have been allowed to continually expand and increase production (i.e., quota) for years. The west coast is still receiving “drought” payments as they have for several years that, which, when viewed in the context of the entire budget for the coop, are a significant portion of expenditures (even though it is a small number of farms).

The merger between WhiteWave and Danone is now being investigated by the US Department of Justice to assess what impact it will have on competition both in the retail market and for supply contracts. Danone, setting up its own small pool of milk, has created some competition for organic milk in New England that producers have been able to leverage for increased pay price and better contract conditions. With the two pools of milk under contract with WhiteWave and Danone merging under the proposed scenario, competition for milk will decrease as we revert back to choosing between the two major purchasers of organic milk. In many cases, depending on the producer’s location to either the processing plant or the truck routes, producers will be left with only one choice for selling their milk, effectively a monopsony. If Danone decides to drop Organic Valley as its supplier of organic milk for its yoghurt and take back the franchise for the Stonyfield brand of retail milk, many New England producers will have little choice but to switch to Danone as a buyer of their milk, under individual contracts which have many restrictions on their rights.

Demand for organic feed corn is moderate to good and prices are steady with organic feed soybeans demand light to moderate. New crop forward contracts for feed corn are $8.00 to $9.25 through to April 2017 with Soybeans at $17-19.50 for the same period. Alfalfa ranges from $320 for Supreme to $160 per ton for fair at the farm. Hay is all located in the west and Southwest. 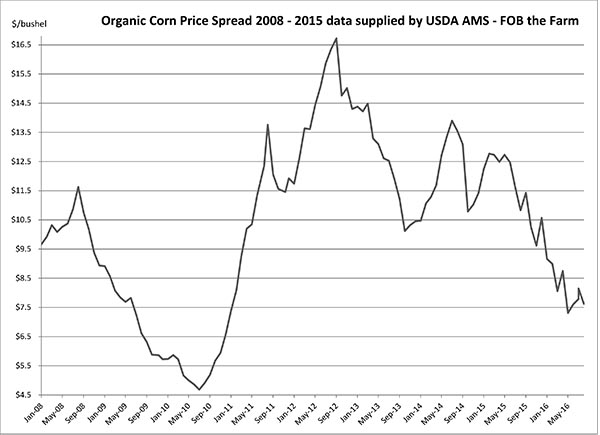 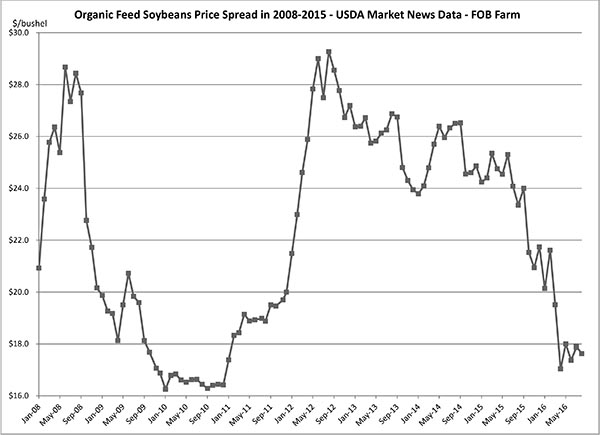