The March 2021 estimated fluid milk sales report recently published by USDA AMS shows a small increase in total sales of organic fluid milk over 2020, at 0.2 percent, but a larger increase of 4.8 percent year to date compared to 2020. The largest increase in sales year over year comes from Flavored Reduced Fat Milk but 2020 saw an increase in sales due to the extraordinary conditions of the pandemic when a lot of the country was in lockdown. Organic Whole Milk had very similar sales to 2020, at 112 million pound, and Fat Reduced Milk product sales, at 143 million pounds of milk, were the same as 2020. The year-to-date data is more interesting as it show an increase in sales in the first two months of 2021 over 2020 of 33 million pounds of milk. These are positive signs that the increased customer base from the pandemic continues to buy organic dairy.

The Organic Valley processing plant in McMinnville, Oregon was mostly destroyed by fire on April 20, 2021. Most of the 25,000 square foot facility is a complete loss. The fire was ruled as accidental with no injuries. The plant has seen several upgrades since Organic Valley purchased the plant in 2017, as $23 million has been invested in renovations and upgrades. Nearly 500,000 pounds of milk is shipped daily into the McMinnville plant, coming from 42 local family farms. Reports are that Organic Valley is finding homes for the milk for their producers. There have been a few dumped loads when there wasn't a place for it and it is reported a good portion is probably going out to the conventional market but Organic Valley is still paying the organic price. Reports from the West are that there have been numerous milk cuts from processors although some organic farmers are able to send their milk to conventional processors, but are receiving payment at the conventional level.

USDA NASS is reporting that this is the worst start for US pastures and ranges in at least thirty years. Extreme drought in the West as well as increasing drought pressures in parts of the Southern Plains and Upper Plains have significantly impacted pasture and range conditions. For the week ending May 16, USDA reported that just 25% of pastures and ranges were in good/excellent condition, a 1 point improvement from the previous week but 22 points lower than the previous year. The 10-year average for this time of year is above 50% when pastures are generally in good shape in late April and May thanks to melting snowfall and spring rains. The National Oceanic and Atmospheric Administration (NOAA) predicts that drought will persist for most of the West and High Plains, based on “elevated probabilities of below normal precipitation and above normal temperatures for June-July-August.” Lack of a rainfall signal from monthly and seasonal precipitation outlooks supports drought persistence across the Midwest. The forecast for the Northeast is based on a weak rainfall signal and likelihood of above normal temperatures during June-July-August, along with a favorable time for “soil moisture discharge”. 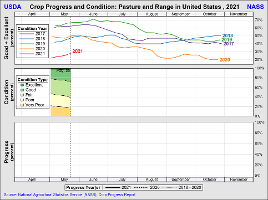 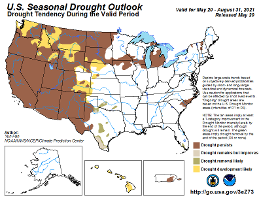 The drought across the west has meant that several organic dairies are hauling water in at a high cost with future availability being unknown. A few of the dairies are selling off some milking cows. Cost of last year’s hay has increased by as much as 25-50% as many California dairies have to buy hay from Oregon and Washington rather than nearer home. This year's hay crop is still an unknown but it will typically increase in cost to match other feed sources. All protein feed is higher in price and availability is patchy with the expectation that organic hay this year will be much in demand and higher in cost. Like the rest of the country, these western producers are not seeing any increase in pay-price and, unfortunately, there will be a number of dairies that will not continue.

The Annual Organic Oversight and Enforcement Report was published by the NOP on May 17, 2021. I was going to summarize it but found I was going round in circles trying to decipher what they actually did. I took a cue from Mark Keating on ODairy that let the report language speak for itself. This is what USDA reported about its ongoing Organic Livestock Compliance Initiative: “The NOP visits in 2019 confirmed that all the targeted dairies demonstrated at least 120 days of grazing, and all cows received at least 30 percent dry matter intake from pasture during the season. Several correctable issues were identified, requiring action from both certifiers and operations. The NOP visits in 2020 deepened evaluations of certifier controls on key practices, such as temporary confinement of cows and calculations of nutrition consumed from pasture.”

As we get into the Origin of Livestock, this report on organic auctions is interesting and also promising for better enforcement of any new regulation: “Complaints of fraud in live animal sales increased in 2020. Investigations initiated at the direction of the NOP resulted in several livestock sale barns surrendering their organic certificates immediately following on-site inspections. NOP has recruited additional Federal investigators with significant experience in USDA livestock enforcement to improve traceability in organic cattle movement nationwide.”

Not sure how a change in leadership at Danone internationally will directly affect Horizon producers but it’s good to keep up with the trends at the company. The Food Dive website reported that Danone has picked Antoine de Saint-Affrique as its CEO starting Sept. 15, and proposes adding him to the board at the next annual shareholders’ meeting in April 2022. De Saint-Affrique announced on April 22nd that he was stepping down from chocolate maker Barry Callebaut as CEO at the end of August. He replaces long-time head Emmanuel Faber, who announced in March he was leaving as Danone's CEO following pressure from activists agitating for a leadership shake up. The new CEO will have to deal with critics who have said Danone has focused too much on its environmental and sustainability efforts at the expense of its financial performance. The shareholder complaints about being focused too much on environmental, social and governance goals is not promising for a rise in pay price. In fact, from some reports Danone is looking at the cost of hauling and starting to drop farms in the Northeast.

We all know that certified organic is the gold standard for environmental practices that benefit the planet but it seems that the farming practices of Organic Valley farmers are a step above the average organic dairy. University of Wisconsin-Madison's assessment reveals that, on average, the dairy farms of Organic Valley's members have a Lower Carbon Footprint (LCA) than the average U.S. conventional and organic dairy overall. The most significant difference in calculations of the carbon footprint of Organic Valley milk is in the inclusion of carbon sequestration from pasture as well as from forage and crop production. Including carbon sequestration in the LCA reduced the net farm emissions of the cooperative's dairy farms by an average of 15%. On average, Organic Valley farmers report engaging in 50% more pasture grazing than that required by the National Organic Program and the LCA results are impacted by this significant difference. Congratulations to all organic dairy farmers for their good production practices and to the University of Madison for publicizing the benefits of organic production practices.