(See full charts at the bottom of this article.)

2018 marked a sad year for the Vermont agricultural community with the passing of Extension Economist Bob Parsons. As part of his legacy UVM, along with NOFA VT, is working to continue with the ongoing organic dairy profitability study. This article provides a summary of the 2016 data collected by Bob and the rest of the study team.

For the year 2016, 35 Vermont organic dairy farms participated in the study. All farms have been certified organic for at least 2 years, with some over 15 years. The smallest farm in the study milked 26 cows and the largest milked 145. The average number of cows per farm was 64.1.

Profitability analysis of the 2016 data shows that the average Return on Assets (ROA) for farms in the study remained similar to the previous two years at 1.88% (compared with 1.71% in 2015 and 1.81% in 2014). Milk prices were also very similar to 2015, with an average price per hundredweight received of $35.58/cwt (compared with $35.59/cwt in 2015). This relatively high price did not last long into 2017, and next year’s data will certainly reflect lower prices and decreased ROA.

In terms of milk production, farms in the study produced an average of 13,717 lbs per cow, far below the 20,679 lbs per cow achieved by small conventional New England dairies. These numbers are both similar to the 2015 data.

The average farm in the 2016 study earned a total of $369,928 in cash receipts, with $345,167 coming from milk sales and $13,612 from cow and calf sales. At $3,824 dairy cow sales did not change much from 2015. Other important sources of income included crop sales and syrup production (on 13 and 6 farms respectively). In terms of expenses, the highest category was purchased feed, with the average farm spending $93,194 on grain and concentrates and $18,305 on purchased forages. As in previous years, repairs and supplies were the next biggest expense at $45,174, followed by $41,495 in depreciation and $34,886 in labor costs. Another important cost assumed by this particular study is $38,000 for operator labor and management. On an accrual basis, 13 of the farms in the study did not earn enough to cover this implied expense, although 8 of these farms also received off-farm income not counted in the farm profitability assessment.

Some costs were actually lower on organic farms per cow, including veterinary and medical expenses, fertilizers, fuel, and seed costs. Subtracting costs from revenues, organic farms in this study earned $587 more per cow than similarly sized conventional farms. In 2016, much as in 2015, high organic milk prices more than compensated for higher per cow expenses. While the milk price did not change, revenue per cow increased by $192 while expenses also increased by $275 from 2015 to 2016, meaning that per cow revenue decreased by $83 in 2016.

All of the above analysis should be tempered by the fact that most conventional dairy farms are far larger than organic farms, with an average of 403 cows per farm, meaning that many of the above per cow estimates for small conventional farms do not hold true for the industry as a whole.

The mid-profit group has the lowest total expenses per cow at $4,153. Per cow expenses are almost the same on the low and high profit farms at $4,243 and $4,267. Given that the middle group also has the fewest cows per farm (48), this low expenditure per cow becomes even more dramatic. However, a comparison with the other groups reveals that cost reduction is not enough to ensure high profitability. By maximizing production while keeping costs as low as the low profit farms, the high profit group does a far better job at keeping profits up.

Breaking per cow expenses down reveals a few more interesting trends in 2016. The mid-profitability group actually spent the most on purchased grain per cow at $1,502 despite generally lower expenses (compared with $1,219 on low profit and $1,423 on high profit farms). This is very different from the situation in 2015, when the middle group spent the least on purchased grain. The low amount of purchased grain on low-profit farms is likely related to their relatively low production numbers. The relatively high amount spent on forages by low profit farms ($297 per cow vs. 120 on mid-profit farms and 251 on high profit farms) is likely due to substitution of expensive organic grain with relatively cheaper forages (lowering production numbers as well as profits).

Vermont organic dairy producers have for several years had the option of switching to a zero-grain production model as Organic Valley and other processors have expanded their grass-fed dairy product lines. This market is less saturated than the organic dairy market as a whole, a fact reflected by a lack of production quotas and the continuing acceptance of new producers in 2016. Grass fed producers selling to Organic Valley receive a guaranteed premium above the organic price in addition to a $1 premium that must be used to purchase additional soil fertility. This is intended to help grass-fed producers replace the nutrients typically brought onto the farm in the form of purchased grain.

The 2016 study included 5 farms that do not feed any grain. On average, this group of farms received a price of $41.74/cwt, slightly lower than the 2015 grass-fed price of $43.16 but still above the organic price. These grass-fed farms were slightly smaller than the organic group with an average of 53.1 cows per farm. Unsurprisingly, milk production per cow is significantly lower for this group at 8,580 lbs per cow (compared with 13,717). This lower production is somewhat compensated by extremely low purchased feed expenses of $207 per cow. Additionally, in 2016 production on grass fed farms increased by 877 lbs per cow, perhaps indicating an improvement in pasture and forage quality on these farms. This increase in production was matched by an increase in per cow expenses, up from $2,879 in 2015 to $3,612 in 2016. Average per cow revenues on the grass-fed farms were $3,869 in 2016, higher than in 2015 but not enough to make up for the increase in expenses. As a result, grass-fed dairy farms were less profitable in 2016 than in 2015, with the average ROA decreasing from 1.91% to -1.47%

In general, 2016 was a relatively good year for Vermont dairy producers on average, with ROA still positive for the average farm at 1.88%. However, 2016 also saw the beginning of the price reductions that have continued into 2018 due to market oversupply. Decreasing pay prices will make expanding herd size and production per cow more appealing as margins decrease, while smaller farms will likely take the biggest financial hit. While demand for some organic dairy products (ice cream and cheese) continues to increase slowly, the market will likely take several years to adjust to the current oversupply situation. The study team is currently in the process of collecting data for 2017, which will make it possible to understand exactly how the reduction in price affected organic dairy profitability for that year. 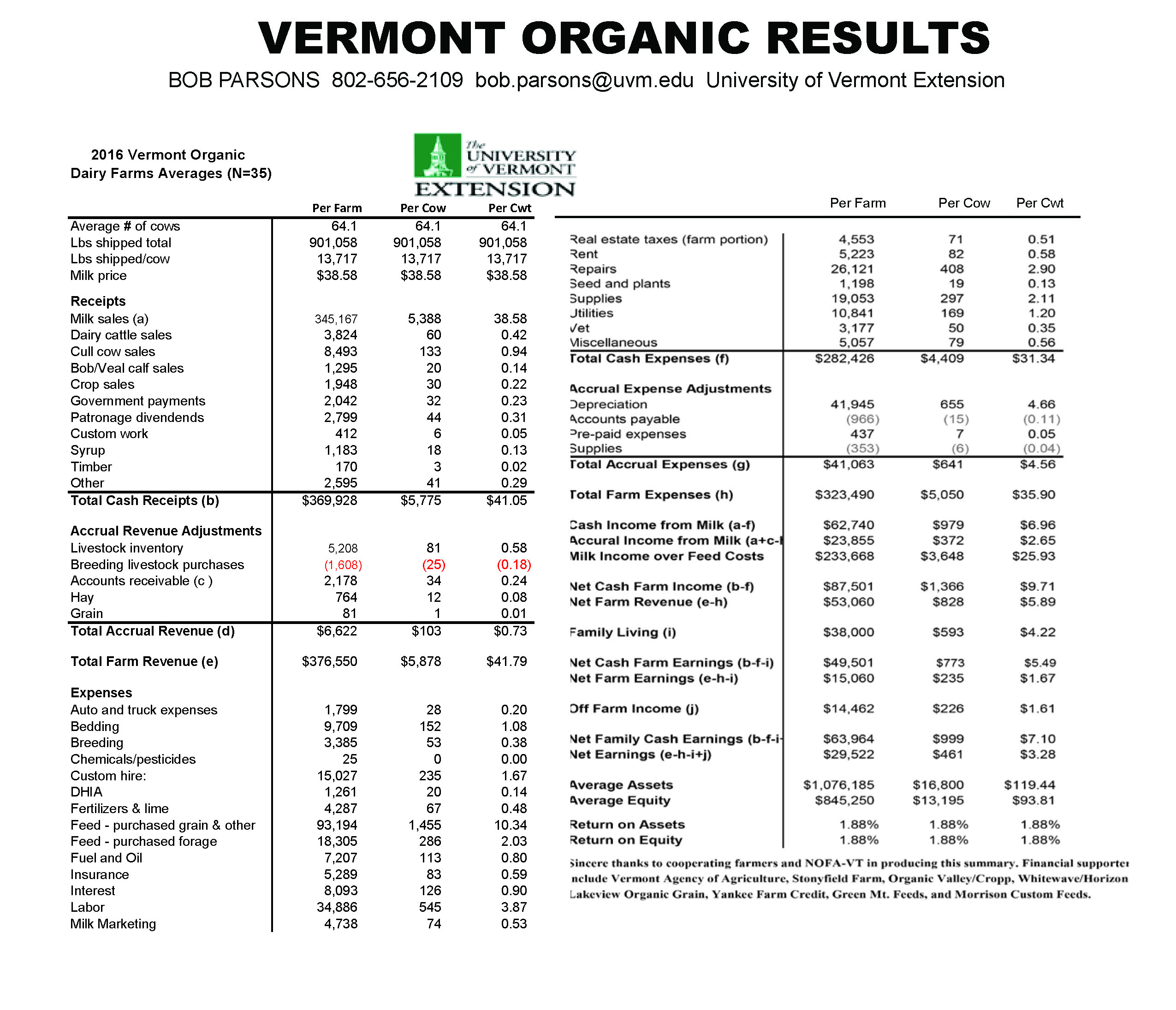 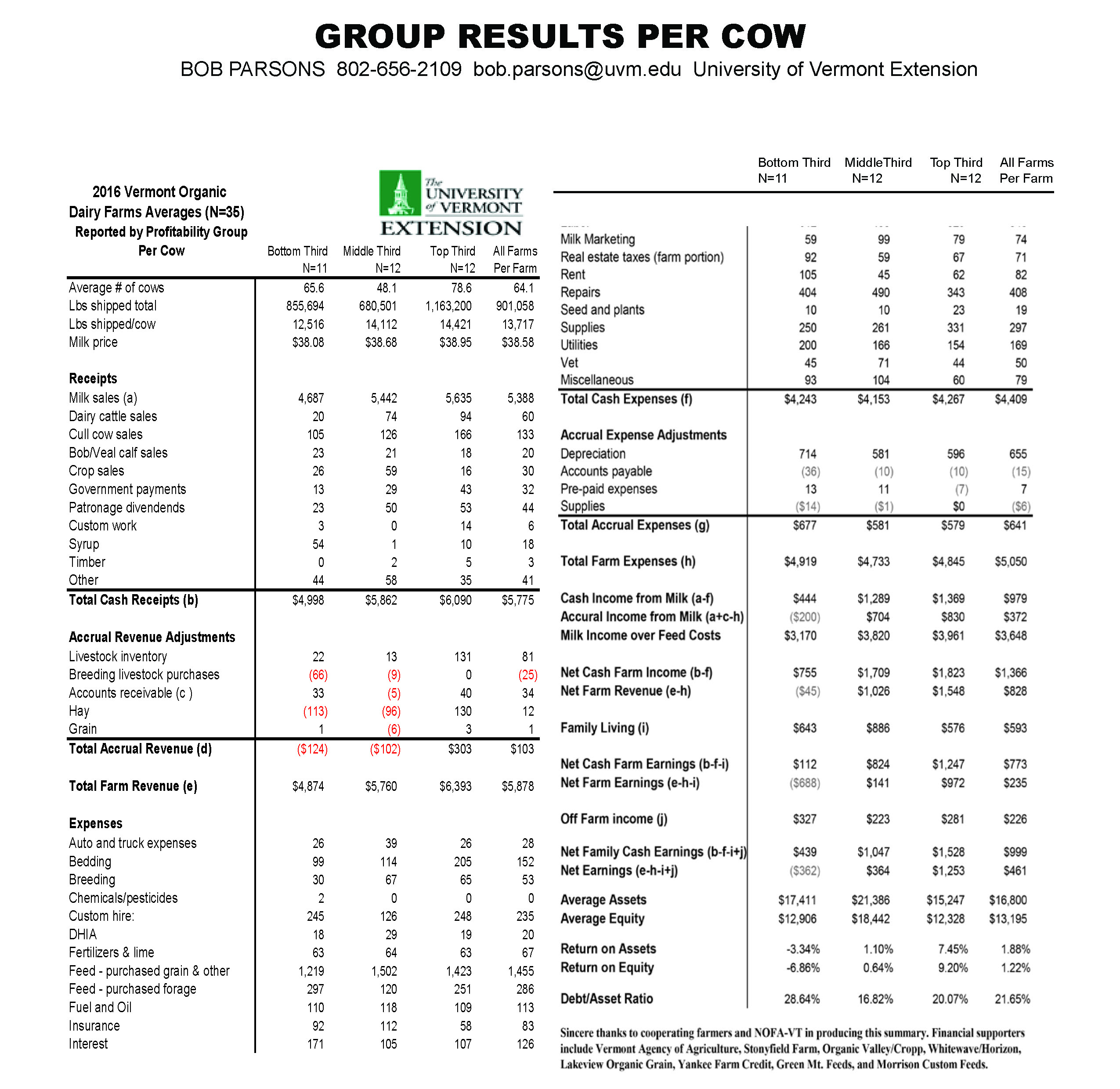 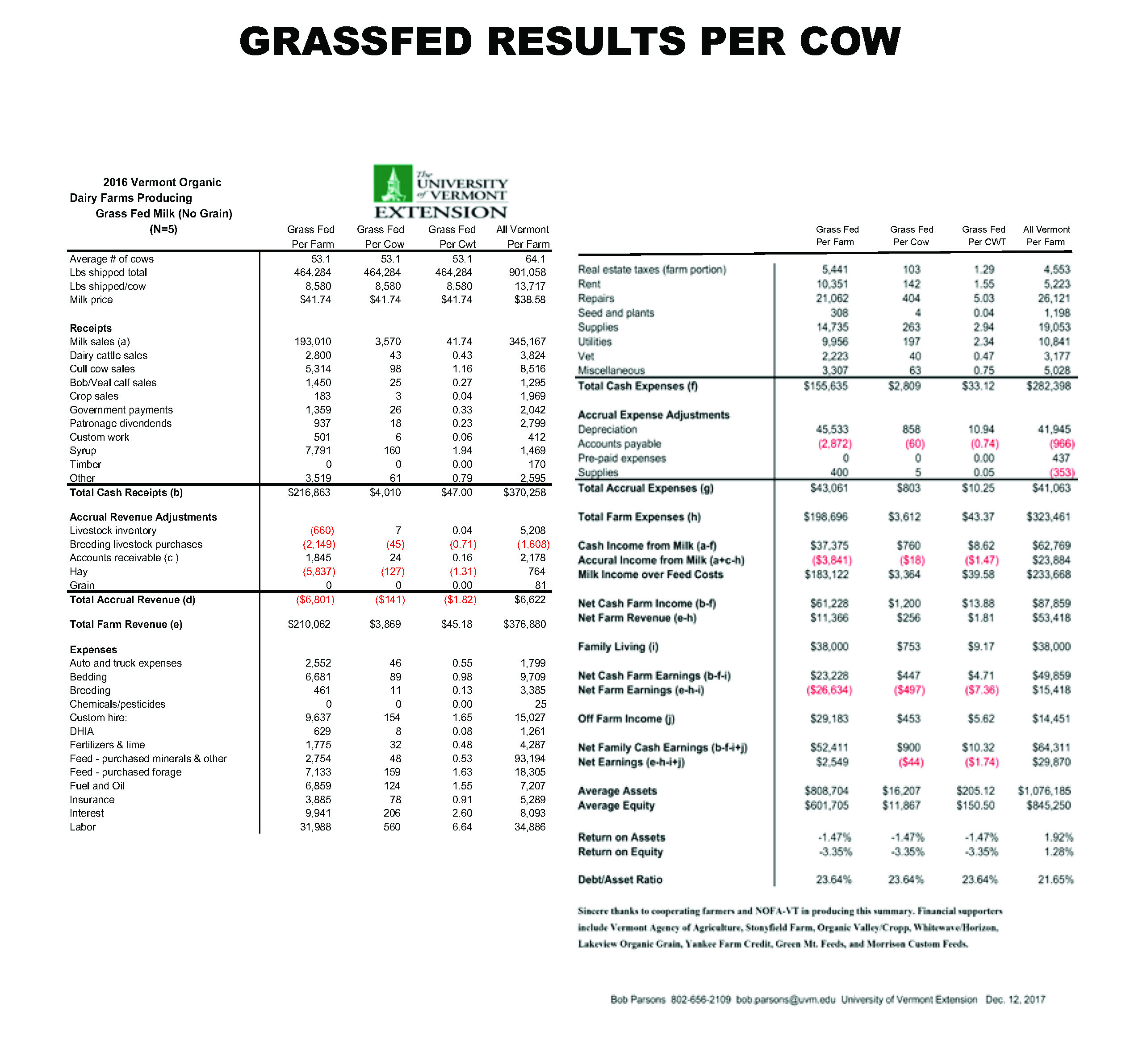