FEATURE FARM: The Burroughs family has been farming in the San Joaquin Valley of California since 1896. Today, their ranch features two certified organic dairies, an almond farm, a pastured egg business ... and much more.

Added May 17, 2010. I recently traveled to California to attend the April 2010 NOSB meeting and decided that it would be a shame to travel all that way and not visit some west coast organic dairy farms. So my trip was a mixture of meetings, networking, and driving to farms within a 2-hour radius of Sacramento. One of the farms (actually, a ranch) that I was fortunate to put in my travel plans was that of Ward and Rosie Burroughs, in Denair, California. Their ranch is located in the San Joaquin Valley and is a place of many enterprises owned in partnership by Ward, Rosie and each of their children. Farming goes way back in both Ward and Rosie’s family lineage.

Ward’s side of the family has been on this ranch since 1896, when his grandfather Benjamin Burroughs first came to California to find his future in the mlk business. Today, the ranch has evolved into two certified organic dairies, an almond farm (of which one third of it is certified organic), a pastured egg business, a new cheese making enterprise and plans for an olive grove and local food store in the making.

There are many notable things to write about in this Feature Farm article, but what we have decided to focus on is the way in which Ward and Rosie have managed to set up a way to transfer the farm to their children. As many know, farm transfer can be a very emotional, tangled web. It requires a clear vision, good communication, a willingness to plan into the future, and time to put the plan in place. It also works well when the older generation can let go and let the next generation take the reins – and Ward and Rosie have been very good at doing this for their children.

Christine, Brian and their children with their pastured poultry

Ward and Rosie believe that the greatest resource agriculture has is its young people, and supporting and encouraging them to keep that enthusiasm growing is something that gives them great satisfaction. Their first Vision Statement was developed in the 1970’s and became the engine for their decisions and plans. It illustrated how blessed they were with an opportunity to work on the ranch and raise their children in that environment and how important it was to be able to pass on the lifestyle and opportunity for their children and to their grandchildren.

In 1999 Ward and Rosie started setting up farm partnerships with their children. Right now the partnerships are 50:50, but over time the children will evolve into full owners of their respective businesses. Over time, the vision statement changed to include input from their children. “Not only did our kids continue our work, but they surpassed our expectations of where we could go”, says Rosie. “Our greatest legacy,” says Ward “ is not only that we have been able to pass onto our children an opportunity to farm, but to see that their health and our grand children’s health is better; each generation is stronger; quality of life is improved by increased health, thanks to organic and sustainable farming practices and the production of nutrient dense food.“

The Burroughs family members have learned the importance of taking a close look at their land base, their quality of life goals, their family needs, and their community. When furthering the business ventures on their ranch, new ideas must flow through their vision statement and come out the other end intact in order to be considered. A facilitator is brought in on occasion when it is felt that the vision statement needs to be reviewed. This tends to happen every 5 years or so. Their most recent vision created about 5 years ago is: “The Burroughs Family is committed to sustain family farming and to promote the preservation of quality farm land. The greatest responsibility we have as farmers and food producers is to turn over our farms, the most precious of natural resources, to future generations, in better condition than we inherited them. By using sustainable agriculture practices we are accomplishing this goal.” 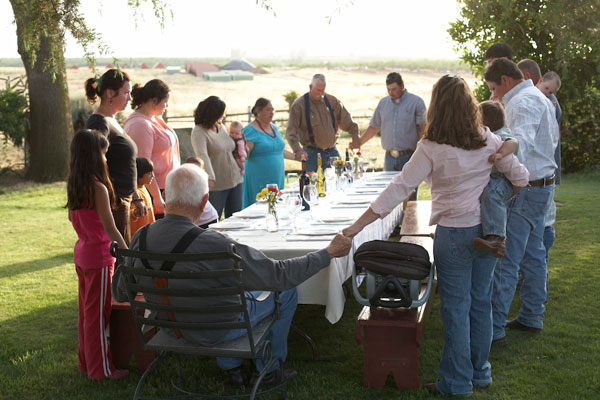 Continued learning and growth seems to be a trait that comes naturally on this ranch; the Burroughs are always working on ways to evolve and make room for a new ideas. They attend conferences regularly, participate in farmer discussion groups for continued learning and peer mentoring/support, and are very involved in their local community on many levels. They do not rush into anything; time is spent in sharing the idea with the rest of the family, making sure it fits within the current vision statement, and researching the enterprise further including the development of a business plan. This often times includes traveling to different parts of the United States and beyond to learn about the new venture being considered.

Before Christina started Full Circle Dairy in 1999, she traveled to New Zealand to visit seasonal grass dairies. There she stayed and worked for several months with some farm families and learned to manage grass. Then, with her father Ward and her grandfather Ernie, they visited several grass-based dairies in the U.S. including Charlie Opitz (Wisconsin), Steve Ross (irrigated dairy in Texas) and Al Wehner (irrigated dairy in Georgia). All these experiences (1998-1999) helped her to design and implement a double-36 swing parlor with high tensile fencing, 300 irrigated acres and seeding pastures down to a pasture mix of mostly ladino and ryegrass.

Benina has been interested in making cheese and recently she and Heriberto purchased a small farm and 17 acres adjacent to their home where she can set up a small cheese making operation among other things. Benina has purchased a lot of the cheese making equipment she will need, has been taking cheese classes and has even traveled to Italy and France to learn about various types of cheeses. She also plans to open a Farm Visiting Center, which will offer a farm experience, school tours and a farm store complete with fresh and value added local food products. Much of the land will be planted to olive trees and there will also be space set aside for growing pumpkins and grapes for making wine. As Benina was doing the cheese making research and pulling together the equipment needed for their cheese making enterprise, an opportunity to rent a local cheese facility once a month came up and it was hard to pass it up. Rosie started taking milk from both of their dairy farms once a month making 70 ten-pound wheels each batch. By July 2009, Burroughs Family Farm started marketing an organic artisan cheese called Benina Crema named after the daughter who had been planning this venture all along. It was recently awarded 5th place in the Open Class Hard Cheeses at the 2010 World Champion Cheese contest. “It is not surprising that when you start with good quality product that you make a high quality cheese,” says Rosie.

Brian, Christina, Zeb, Meredith, Ward and Rosie have been part of a dynamic discussion group called The Pro-Grass-Tinators; a group of about 17 Pasture Based Dairy Farmers from about 9 different states. The goal of this group is to learn from one another by sharing management practices as well as financial comparisons. The group meets at least three times each year on a members farm to see the practices used and discuss the attributes of grazing management on that farm. Members are required to keep sound financial records of their farm operations and share those records with all member of the group. They also make sure to have an educational component to their meetings and will bring in a speaker to cover subjects of interest such as succession planning, estate planning or finances.

The Cornell Dairy Farm Business Summary (DFBS) is the system of record analysis used by the group. Each year, a financial summary is prepared and comparisons are shared at a winter meeting. This experience has had such a positive experience for the Burroughs that they were inspired to start a new group in California. With the help of Cindy Daley at Chico University, they started ‘Graziers West’ a couple years ago.

About the Dairy Farms

The dairy farms on Burroughs Family Farms are both seasonal grass based dairies; each milking between 500 and 550 cows. The farms have been ‘designed with simplicity working with nature concentrating on the environmental and economical sustainability for their land, their animals and themselves.’ They milk Jersey cross cows whose genetics are mostly from New Zealand, France and Scandanavia. They manage their cows on rotational pasture, giving them a new paddock after every milking.

Both dairies utilize open and simple New Zealand style, highline, swing-over milking parlors. During the grazing season, cows get a new pasture after each milking and an average of 8-14 lbs of grain fed in the parlor. Yearling heifers are used as followers in the grazing rotation.

Pastures are irrigated each day for most of the grazing season. Water is pumped from their own deep wells to irrigate their pastures and they have buried tile lines to recycle irrigation water runoff from the pivots.

The goal on both dairy farms is to reduce stress on their cows and to offer preventative measures to maintain health. Examples include an 8-way vaccine that includes clostridium, respiratory complex, IBR, PI3, Lepto and BRSB. They also offer free choice kelp, humates and aloe to their cows, calves and heifers.

With these management changes, they have seen less health issues and beautiful strong heats, allowing them to breed within their tight calving windows for their seasonal herds. Common treatments that they turn to tend to be Aloe, vitamin C, herbal tinctures, homeopathic remedies, Vitamins A, D and E, Multi Minerals and fluids.

The herd veterinarian is used for preg checks, the occasional calving and BANGS vaccine. An ideal veterinarian would be one that was familiar with the use of homeopathy, tinctures and have training in livestock nutrition. They work with a dairy nutritionist who helps them balance their rations for optimum herd health.

Calves are raised on milk for 120-150 days and are introduced to grain and pasture at about 3 weeks of age. They feed their calves milk using a 55 gallon barrel with nipples placed midway. Vaccines are given at 8 months of age and include BANGS and Brucellosis. Calf health is excellent, but for the occasional occurrences, they turn to Dr. Paul’s tinctures for coccidia, and black walnut hulls and diatomaceous earth for parasites. Calf mortality rate has been at 1% or lower with the “mob” raising system.

The Burroughs Family Farm has evolved over time from a production farm to a farm ‘organism’ with many ventures, value added products, and numerous opportunities for people to come to the farm and learn, experience, purchase product and celebrate the bounty of a diversified enterprise. The initial vision of passing the farm to the next generation seems to have morphed into sharing their bounty with the local community and beyond through product, education and reverence for the land. Their farm has become an annual destination point for a nearby college, a place to take in apprentices from overseas, and now, with their involvement with the Slow Food Movement, their impact on the agricultural landscape has crossed beyond their farm boundaries more than ever before. An accomplishment anyone would be proud of.