John Maedke & his wife Bonnie found the transition to organic production, which they completed in December 2002, easier than they expected. Their greatest challenge? Getting acclimated to the grazing management requirements.

Added September 14, 2009.The Maedke Family Farm, located in Coleman, Wisconsin is a farm that still uses some of the old farming ways while also embracing new technologies that improve the efficiency and independence of their farm. They milk 40 Holstein and Holstein/Brown Swiss cross cows, have about 30 replacement animals and have a closed herd. Annual production on their farm is about 584,000 pounds per year or 14,600 pounds per cow.

John and Bonnie own approximately 200 acres of which 35 acres is pastureland, 15 acres is wooded, 20-40 acres are in corn, 60-70 acres are in hay and 20-40 acres are in small grains. They grow most of their own feed, usually sowing fall rye. Oats and barley are part of the annual rotation of small grains, and they dabble with other forages and grains from year to year including oats planted with peas and different varieties of sorghum sudan grass.

John has been farming 15 years on his own. Prior to that he farmed with his parents for 10 years while employed by the National Farmers Organization as a Dairy Field Representative. His responsibilities included procurement, producer relationships and milk quality. This job gave him a pretty good understanding of the inner workings of the dairy farmer. Farmers, he found are challenging to organize, and stubborn. Bonnie joined John in farming when they married in 2002. She is in charge of raising the calves, keeping the farm records, the books and running the house.
The Maedkes have three children: Corey is 19 and is away at college; Sydney is 16, and a junior at Coleman High School. She helps with chores when she is not competing in track, working at a local diner, or hanging out with friends. Simon is 5 1/2 and just started Kindergarten at their local Christian Day School. He loves to ride on the tractors, knows all the equipment and what it does. He is a farmer for sure.

Matthew is their only employee and works for John and Bonnie full time. He started when he was 18 years old, working part time for 4 years and full time for the past three years. Matthew was already versed in organic production when he started with Bonnie and John; his family raises organic chickens and eggs. Matthew recently purchased ten acres of land nearby which he is transitioning to organic with the hopes of raising organic beef in the near future. They feel truly blessed to have such a trustworthy, hardworking, dedicated employee. It was because of Matthew’s dependability that John, Bonnie and their son Simon were able to take a vacation and attend the NODPA Field Days this year.

John and Bonnie have been certified organic since December 2002, and started shipping milk January 2003 to Organic Valley. The Maedkes originally started the transition to organic because John didn’t trust the local agricultural centers and was not interested in getting his own sprayer applicator license. By choosing not to spray, he learned that he could still grow nice crops so why not go organic. An added bonus is having a voice within the co-op when it comes to milk pricing. It was still a three-year process; they just needed to get through the huge binder of paperwork. Bonnie was great with the organic paperwork. If it wasn’t for her, the transition to organic would have been much more delayed.

The transition to organic dairy production was easier than anticipated. According to John, it was actually ‘uneventful’. Their biggest concern when they started their transition was how to deal with sick cows. This ended up to be the least of their problems. Their greater challenge was getting acclimated to the grazing management requirements, but they have made some great strides in that arena. Another challenge has been with the record keeping. The Maedkes do not believe in ear tags, but understand the importance of identifying all the animals on the farm and tracking their movement if they leave the farm. They use neck chains, making sure not to re-use numbers, and photos of the animals, which gets filed with their records. They are certified through MOSA, out of Viroqua, Wisconsin.

Prior to being organic, the Maedkes turned their cows out on pasture, but it was not managed as a part of the daily feed ration. Pasture was more of a turnout for the cows where they were supplemented with green chop or some other harvested feed. John and Bonnie have made a lot of improvements over the years, but still see their grazing program as a work in progress. Currently, they have 17 paddocks about one acre in size. They rotationally graze these paddocks providing fresh pasture after the evening milking and offer green chop or other harvested forages during the day.

To get started with their grazing system, they turned to many people for advice and wisdom including Don Baker, an organic farmer in Iowa, and Rick Adamski, afellow organic dairy producer with Organic Valley and current DEC Representative. They also have worked with their local extension agent, participated in a grazing group, and have hosted a pasture walk at their farm.
Due to a series of unseasonably dry summers, John decided to find a forage variety that can withstand dry conditions and that is adapted to his area. Last year, they planted 15 acres of pasture land to some native grasses, Big Bluestem & Canadian Milk Vetch that they hope to start grazing in 2010-2011. Big Bluestem is a perennial warm season grass climatically adapted throughout the Midwest and Northeast on well-drained soils. The leaves are very nutritious for cattle, and it is now being rediscovered as commercial hay and a forage plant.

A representative summer ration on the Maedke farm would be 40% pasture, some green chop, a couple pounds of straw, dry hay and 4-5 lbs of an oats/rye/corn grain mix. The winter ration consists of dry hay, bagged feed (corn silage and hay silage), straw and 4-5 lbs of the same grain ration. They grow all the small grains on their farm and purchase organic shell corn. Their feed is mixed at a contract feed mill called Peshtigo Mill, located about 10 miles from the farm. The mill works with conventional producers, but it is also certified organic for the Maedke Family Farm. In this situation, John is responsible for purging (cleaning) the system before his organic grains get mixed and formulated into a ration. To do this, he brings organic straw and runs it through the mill first, cleaning out any conventional grains or chaff that was lingering in the equipment. John and Bonnie really enjoy working with their local grain mill and appreciate how they were willing to work with them. Prior to working with their local mill, the Maedke’s had to travel 200 miles to western Wisconsin every 3 months to have their grain mix formulated for them.

The primary preventative health plan on the Maedke farm is to not push the cows for production. They seem to heal very effectively on their own in a low stress environment. Mastitis clears easily by stripping the cow several times per day and is usually necessary for 1-2 days and then she seems to be recovered. They don’t see much Ketosis but when they have had it John has used organic coffee as a way to perk up the cow to get her to eat. They do this by mixing coffee and water in a beer bottle and drenching the cow.

Prior to being organic, the Maedkes had a few milk fevers a year and the occasional down cow. Today, John can’t remember when he had a case. “ Since the conversion to organic, I have seen the tremendous ability the cows have to heal themselves. Part of this is due to the organic feed and the other is due to us not pushing the cows to produce gigantic amounts of milk”, says John. They do not vaccinate the cows or the calves, nor do they use any type of Homeopathy. They rarely call their local vet, though they feel that the ideal vet would be someone who offers alternative treatments and does some on-farm research looking at the efficacy of organic treatment options.

Calves are raised during the spring and summer months only. They use calf port-a-huts and wean the calves at around three months. Currently, due to a milk quota which requires that they reduce their production by 7%, they decided to keep their calves on milk longer and fertilize some hay ground with excess milk. The calves definitely look good. Hay is always available to the calves from birth and they receive a sniff of grain once a day. They don’t have any health issues with their calves. 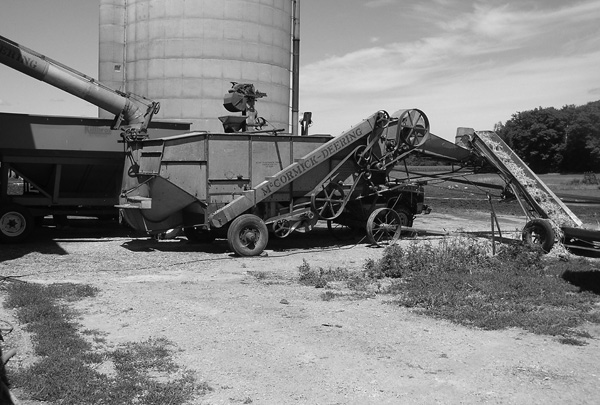 At the NODPA Field days, John heard the words, ‘Don’t be afraid to experiment.’ From James Landis, the keynote speaker. John has to agree. “We have tried some weird things”, says John. “We grew Cammellina to try and raise our own fuel, we’ve planted peas with our corn, and use an old dependable McCormick-Deering threshing machine for our small grains.”

All the vehicles and machinery on the Maedke Family Farm are run on diesel fuel, and a percentage of the fuel used is from waste vegetable oil. Interested in growing their own fuel oil crop, they tried growing Cammellina, but the crop was a failure due to droughty conditions and weed problems. They continue to use waste veggie oil from a number of restaurants and in the summer time, 50% of the tractor fuel is from vegetable oil and up to 80% for their Mercedes family car.

Inspired by the ‘Three Sisters Garden’ approach to soil fertility, the Maedkes started planting peas with their corn. The system has worked well for them and they can enjoy some nice peas for the supper table if they get out in the cornfield at the right time.

John has been threshing his small grains ever since he can remember and his boy Simon is amazed and enamored with the process. The grain is swathed in the field in July or August using a draper head. The crop lays in the field in windrows for a day or two and is then harvested with a chopper and brought to the barnyard where the thresher is waiting to sort the grain from the straw.

How to Better Serve the Organic Dairy Industry

When asked what needed to be addressed in the organic dairy industry in order for producers to be better served, John responded quickly by saying “price, price, price”. A ‘fair’ pay price for the Maedke family would need to be at least $35 dollars per hundredweight, but parity would, of course, be better. “If a farmer makes money, he spends it [within the local community] and the whole economy grows”, says John. Bonnie and John are in full support of the Organic Valley mandatory supply reduction program, but are disheartened by the number of farmers that choose to not participate by producing excess milk. He feels that price can be addressed by implementing various supply control measures on the farm and making sure to always be talking about price so that it is heard by the industry. Supply management also needs to be a part of every discussion. “That [supply management] and only that will keep the farmer in some position of strength when it comes to negotiating the price for his/her raw product,” says John. “Supply management and price go hand in hand. A good price promotes supply management and supply management is conducive to a good price, contrary to the common thinking that a high price promotes excess production.”