In the Italian and French Alps, dairy herds are grazed during the late summer in high alpine pastures. Many of these pastures are far from the main farmstead, so a portable parlor is parked near the grazing areas. Cow flow is managed with single-strand polywire fences and portable energizers to control where the herd grazes each day, and to bunch the herd close to the parlor during milking. The first of these photos is in France in a location where the milk is hauled down to the valley where it is made into cheese. The second photo is of a more remote location in Italy where some milk is made into cheese on site in a portable cheese room next to the portable parlor.

Managing a grazing system for dairy animals requires that they move from pasture to get milked, and then back to pasture multiple times each day. This requires more planning for lanes and fence locations than on a beef or sheep farm, where the herd is simply moved from one paddock to another and may not return to the barn during the entire grazing season. Dairy grazing systems also require that the farm have enough pasture land within reasonable walking distance of the milking facility. If the parlor can be portable, there is more flexibility on the location of the grazing land. But if the milking facility is in a fixed location, the grazing system design requires some careful planning in order for it to work well.

Some key points to keep cows moving efficiently and comfortably around are pretty obvious: Lanes on a dairy farm need to be wide enough to accommodate the whole lactating herd or flock, and need to be well surfaced to keep the animals from getting muddy or injuring hooves. Lanes and paddock gates need to be located so that it is efficient and non-stressful for livestock to exit the pasture through the gate, walk to get milked, and return to grazing. Some shade or drinking water sources along the lane can also help during hot summer weather.

One innovative solution to managing dairy cow flow between pasture and milking facility is the use of portable parlors. Unfortunately, it is usually not easy (or possible) to be allowed to use these portable systems in this country, but where allowed, they are a very helpful tool that allows dairy animals to be milked and grazed in pastures located a long way from the barn. As our farm land-bases become increasingly fragmented by development pressures, portable parlors could be an ideal way to allow dairy farmers to graze and milk flocks and herds in the US too.

Another technology that has a significant impact on how cows move back and forth to pasture is robotic milking systems. An increasing number of farms are adopting this technology, but it creates some unique challenges for farmers who want to continue to graze the dairy herd. It is possible to continue to graze a herd that is being milked by robots, but the farm must have the right land base, barn/robot location, and grazing system design in order to maintain pasture dry matter intake levels for the herd. Even with a perfectly designed grazing system, most farms with robotic milking systems have seen a drop in dry matter intake from pasture overall.

A robotic milking system can offer many labor-saving benefits, but each farm will need to assess whether it is a useful and financially feasible choice. For farms that want to continue to graze the milking herd, (or are required to do so by the organic standards), it is critical that the grazing system work well with the new robotic milking system.

The robot units are generally located in or right next to the freestall or the loose housing area for the dairy cows. During the non-grazing season, this allows cows to walk between feed bunks, stalls, or bedded pack areas, and the milking units. Cows can choose when to get milked, when to eat, and when to sleep and usually have a fairly short walking distance between each area. Farms that have converted to robotic milking systems find that the cows choose to get milked more often than twice a day, which improves milk production and quality. Cows in these systems are calm due to low stress levels.

Each cow has a collar with an ID on it, which the robot reads each time she enters the milking unit. Based on her stage of lactation and level of milk production, the robot gives her some grain and milks her while she eats. Or if the cow has been milked recently, the robot just opens the door and the cow walks out. In addition to getting grain while in the robot, a cow can eat other forages and grains in the freestall or feed bunks. Using the robot to feed the additional grain allows each cow’s ration to be individually balanced to her needs. So although installing a robotic milking system is a big financial investment, there are many advantages for the cows and the farmer.
For those who want to graze the cows, however, these robotic systems often require farmers to significantly redesign their grazing systems. This is why some grass based or organic dairy farms find that a robot just isn’t a good match for their unique pasture system and land base.

Cow flow between the pastures and the robots is the primary problem on farms that both graze and use robotic milking systems. When milking takes place in a parlor or tie stall, cows are herded out to pasture as a whole group after each milking. Then later that day, the whole group is brought back in for the next milking. Once a farm has robots, however, cows must have continuous access to the robots. Each robot can milk only one cow at a time, and the robots are designed to have a steady flow of cows passing through. It is not feasible to just bring in a whole herd a couple of times a day for robotic milking. A new grazing system must be designed that allows continuous flow of cows to pasture, to the freestall for additional feed, and to the robot to be milked. For some farms, due to the layout of the pastures and location of the barns, a robotic milking system may not be compatible with grazing the dairy herd.

There are some common principles that all farms adding robots will need to consider in designing (or redesigning) their grazing system:

Over time, farmers who are grazing and using robots find that the cow flow improves so that cows are accessing both high-quality pasture and the robots at the right intervals.

A SUCCESSFUL GRAZING SYSTEM WITH ROBOTS:

Hall and Breen Farm in Addison County, Vermont, already had a well-designed grazing system for their organic herd of Holsteins when they installed milking robots in 2011. They were the first grazing farm in Vermont to put in a robot, so they had to figure out how to adjust their grazing system to work with the changes to cow flow that robots create.

The farm has two robots that milk a herd of over 100 cows. The soils are somewhat challenging heavy clay, and they have almost 160 acres of land available for the milking herd to graze. They take a first cut of hay from some of that land and add the additional land into the grazing rotation once it has regrown to the correct pre-grazing height. More land for grazing is available on the other side of the road from the barn, and other locations. However, it is too difficult to cross the road with the lactating herd now that they have the robots, so they now make stored forages from those fields. 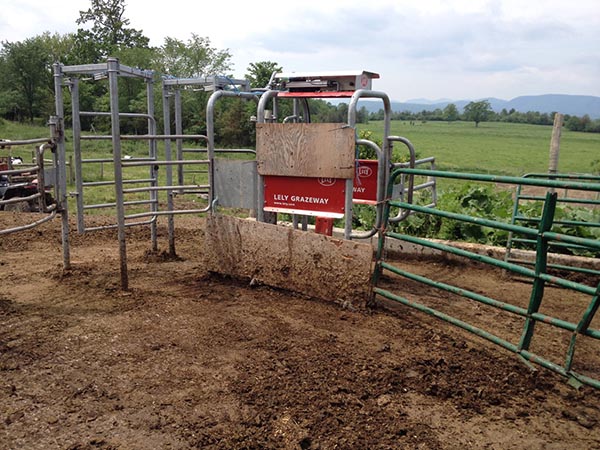 The exit gate sorts the cows as they leave the barn area, only allowing those that have been milked already to walk out to pasture.

The transition from milking in a parlor to using robots to milk the cows had some rough spots as Jen and Louis figured out how to make the cow flow work. The robots were installed during the non-grazing season. During that first winter, the cow flow with the new system went very well. However, once the first grazing season started, a variety of problems arose with cow flow to and from pasture. Late-lactation cows sometimes chose to stay out on pasture, so milking frequency dropped and SCC (somatic cell count) went up. Jen and Louis had to go out to pasture to bring in cows more frequently while they worked on solving the cow-flow problems.

The changes they made included building new, improved lanes. This solved some problems with mud and rough lane surfaces, which had discouraged the cows from walking on them. The main access lanes also provide some shade as the cows choose to walk out to pasture or back to the barn on their own schedule. They also installed a computerized Grazeway exit gate, which doesn’t allow cows to go out to pasture unless they have already been milked. They still need to go out to pasture to bring a few cows in, but the cow flow is now working well on the farm.

This article was adapted from portions of her recently-released book, The Art and Science of Grazing, which is available bookstores everywhere (just ask!), or directly from the publisher at www.chelseagreen.com.

Sarah Flack is a consultant specializing in grass based and organic livestock farming. She is the author of several books on organic dairy farming, and her most recent book, The Art and Science of Grazing, was published in the spring of 2016.