A Haven of Sustainability

Desperation Acres, home and farm of Bruce and Mari Drinkman, lies in the ‘rolling and somewhat rugged hills’ of western Wisconsin. The farm is an hour east of Minneapolis St Paul and a reasonable drive to the annual MOSES Organic Farming Conference that takes place every February.
Bruce is the third generation on his farm; he purchased Desperation Acres from his father (who purchased it from his father) and has been farming on this land all his life. He and Mari have 5 grown children, all living off the farm and at this point it does not look like any of them will be coming back to become the 4th generation; they have all seen too many hard times on the farm. The agrarian lifestyle, however, works for Bruce and Mari. They like the fact that they can have a day off in the middle of the week if they need it, avoiding weekend crowds.

The Art of Self-Sufficiency
The Drinkmans have always farmed sustainably; their goal is to meet all the concentrate and forage needs of their livestock from their acreage, which calls for a diversified grass-based system. To their 300-600 cow confinement dairy neighbors, their model of farming stands out as rather odd and nonconformist. Their farm consists of about 300 total acres of which 120 is owned and the rest is rented. About 140 acres is used for pasture, 90 acres is used for hay, and 85 acres is used for growing annual crops. The annual crops grown include 30 acres corn, 30 acres oats/barley/wheat, 10 acres field peas/small grain for forage and 15 acres of a soybean open pollinated milo blend or soybean sorghum sudan blend – also for forage. A farm of this size and scale is able to support a herd of about 60 cows; with 55 cows milking year round.

To meet the concentrate needs of their 55 cow dairy, Bruce and Mari grow a minimum of 25 acres of small grains and 15 acres of cob corn. Their small grains consist of 50% oats, 25% wheat and 25% barley. They make haylage small and large dry hay bales and are usually able to meet all their forage and grain needs, trying only to purchase their salt, minerals, kelp and vitamins.

The last 3 years have been very dry, however, and last year, for the first time in the 45 years that Bruce has been on the farm, they had to purchase 2 semi loads of hay. Mother Nature, it appears, is trying to make up for the 3-year drought by giving them all the precipitation at once. In the last month they have received 20 inches or rain, which has allowed the water tables to recover, but has interfered with getting hay crops in.

Transition to Organic
Desperation Acres is coming upon its 3rd year of organic certification. They market their milk to Organic Choice, a company that markets cheese and sells fluid milk to Horizon and Organic Valley. They are certified by MOSA (Midwest Organic Services Association) who is very helpful with any of the little questions that are sure to pop up in the organic industry.
They transitioned their herd to organic when the 80/20 rule was still in effect , allowing them to feed 20% conventional ration for the first 9 months of their one year whole herd transition. Management changes were very minimal, as they have always pastured their cows did not use dry treatment products, rarely used antibiotics or penicillin, and 250 of their 300 acres already qualified as organic.

Even though they were able to save some money with the 80/20 rule, their transition was costly. The pay price for conventional milk was the lowest it had been on record and the first year of a 3-year drought was upon them. Once on the organic truck, their milk check doubled. The joy was short lived, however, as cost of fuel and feed was rapidly increasing while the payprice for organic milk was lagging far behind.

Barn Design and Milking Herd
Their barn is a 48 year old 55-stall stanchion barn with a pipeline. It was rebuilt where the old barn had been and is designed to provide excellent air flow and lots of good light. The dairy herd consists of Holsteins, Jerseys, Guernseys, and various crosses of those 3 breeds. They do not get too involved with testing and their herd average is lower than most, but they take the milk that their feed will give them. Bruce does not believe in ‘buying the milk’ (laying out thousands of dollars towards feed in order to get milk to pay for the feed). Their herd is basically a closed herd with the exception of bringing in a bull or two for breeding. The cows freshen year round and the bull runs with the cows the bulk of the time. They have been able to maintain calving intervals of 12-13 months. 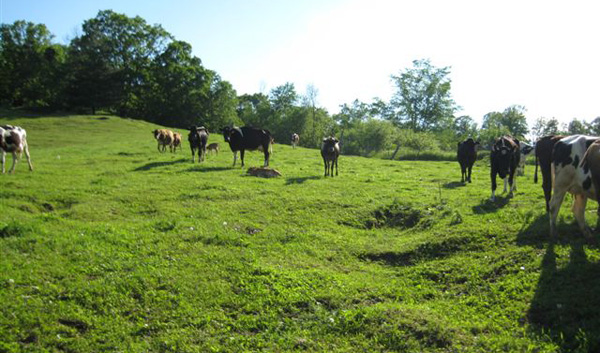 Grazing System and Feed Rations
Bruce and Mari’s cows have access to 40 acres of permanent pasture and they add hay ground as needed after the first cutting has been taken. At the end of the grazing season, they are using 75 acres for their milking cows. Cows are rotated onto new pasture every 2- 4 days. Their young stock have access to the other 100 acres of permanent pasture and woods.

In the summer Bruce and Mari feed 4-6 pounds of a 13% protein grain, some haylage or oatlage, and pasture for the cows. They try to feed an average of 50% DMI from pasture during the grazing season (May- October). In the winter they increase their grain ration to 6-8 pounds on average. The balance of the winter ration consists of haylage,, baled dry hay and either corn silage or one of the bean and milo or sudax mixes.

Calf Care
Calves are fed fresh colostrum as soon as possible and the newborns are allowed to suck for 3-4 days longer if it seems they need it. Calves are started with 1.5 gallons of milk a day and they build them up to 2 gallons. Hay is available almost immediately and grain is introduced after the first couple of weeks. They do not vaccinate the calves except for Pinky eye in season.

Livestock Health
Since transitioning to organic production, Bruce and Mari have seen very little change in their animal health. The basic health plan on Desperation Acres is to keep the nutrition at the optimum level and to remove any stress that they can. This requires having a balanced ration, a clean environment and comfortable cows. ‘The cows will tell you what they need if you watch them’, says Bruce, ‘it is much better to prevent than to treat.’ They seldom see the vet except for some pregnancy checks. They have a nutritionist that they work with on a regular basis meeting monthly and sometimes more. The nutritionist is very good at helping them stay on budget without cheating

The only vaccination that they provide their animals is for pink eye. Mastitis rarely occurs, but when it does, they use Udder Comfort, strip out the quarter frequently and occasionally use a sucker calf. Milk Fever has only happened once on their farm in the past 3 years and they have had success with the calcium supplements that are available. For pneumonia and calf scours they turn to probiotics, electrolytes, plenty of liquids, and warm dry living conditions. To stay on top of reproduction issues, they check their feed ration not once, but twice.

Bruce’s turnover rate (cull rate) is 15 – 20% which includes some voluntary culling. Age is usually the major reason for culling; their cows last well into their 8th or 9th lactation. “If you can’t keep your cow for at least 4 lactations, you aren’t getting your return on them”, says Bruce.

Resources
The Drinkmans rely on a variety of people and tools for resources. Among them are their nutritionist, other farmers, ODAIRY’s on-line discussion list, the NODPA website, Dr Hubert Karreman’s monthly newsletter and pretty much any thing else they can find on the internet. They have attended the Organic Conference in LA Crosse and some other events in their area. Bruce’s recommended reading is the series of books from James Herriot about his vet work in the 40’s to 60’s. This is proof for him that herd health and nutrition can be maintained without the fancy medicines of today.

Future Needs of the Organic Dairy Industry
Without hesitation, Bruce states that we need to get the pasture and origin of livestock rules in place as soon as possible. The viability of the organic dairy industry relies upon it.

Bruce and Mari has been involved in many of the leading producer organizations that represent organic dairy and advocate for these rule changes including NODPA, WODPA, MODPA and FOOD Farmers. Bruce is current Treasurer for MODPA and encourages everyone to get involved. “We have a voice now and we need to use it”, he says. “You can’t be heard if you don’t speak [and] if you don’t speak up, you have nobody to blame bur yourself”. Bruce gets great satisfaction in knowing that he can make a difference and ended his interview with his famous tagline “Parity Not Poverty”.