Adam bringing the cows in for milking.

No salesmen come down this driveway anymore,” said Organic Valley dairy farmer Ron Holter. “They know not to bother us. We haven’t bought seed in twenty years.” Ron is the 5th generation to farm on Holterholm Farms located in Jefferson, MD, in the foothills of the Appalachian Mountains in southwestern Frederick County, Maryland. He and his son, Adam, farm together full-time. The farm was certified organic in 2005. Drive 13 miles to the southwest and you’ll end up in the historic town of Harper’s Ferry, West Virginia.

Salesmen leave the Holter’s alone because over the past two decades Ron has conscientiously simplified his farming operation to require fewer inputs. Ron’s father and Uncle ran a confinement operation, milking 100 Holsteins, from the 1960’s-1990’s. Ron knows how to plant corn, mix a ration, and clean a freestall, but by the mid-1990’s, when he took the farm over from his father and uncle, Ron decided he wanted to do things differently.

In 1994, Ron took part in a PRO-DAIRY course through Maryland Extension. According to Ron, the class “promoted thinking outside the box.” Grazing was mentioned as a possible strategy and the idea struck a chord with Ron. In 1995, he took a leap of faith and planted the entire farm to grass. The first year he grazed only heifers. Even though they were 100% Holsteins with American genetics, Ron saw the benefits of grazing. By the next year, all of the animals were on grass. 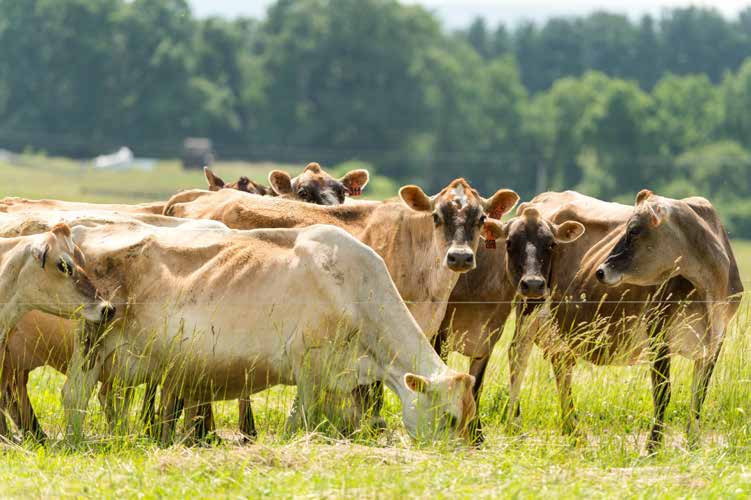 Some of the girls

The Holter’s own 207 acres and rent close to another 100. “Except for 13 acres that is difficult to access, I consider all of our land pasture,” Ron said. “We make hay on anything extra.” Typically, they hay about 60-70 acres of their pasture a year. Sometimes one cutting, sometimes up to three. For winter they need 700-800 round bales of baleage and dry hay. Half is produced on the farm, and the rest purchased.

“We don’t want to make hay off the same piece of pasture two years in a row,” Ron explained. Preferably, he only hays a piece of pasture once every three or four years because haying removes biomass without returning nutrients.

Along with developing a rotational grazing program, Ron began shifting the genetics of the herd towards Jerseys. He also decided that he would be seasonal. “In 1997, I sold the half of the herd that was fall calving and replaced them with Jerseys bred to calve in the spring,” Ron said. By 2006, the entire herd was Jersey. An average mature milk cow weighs 900 pounds. 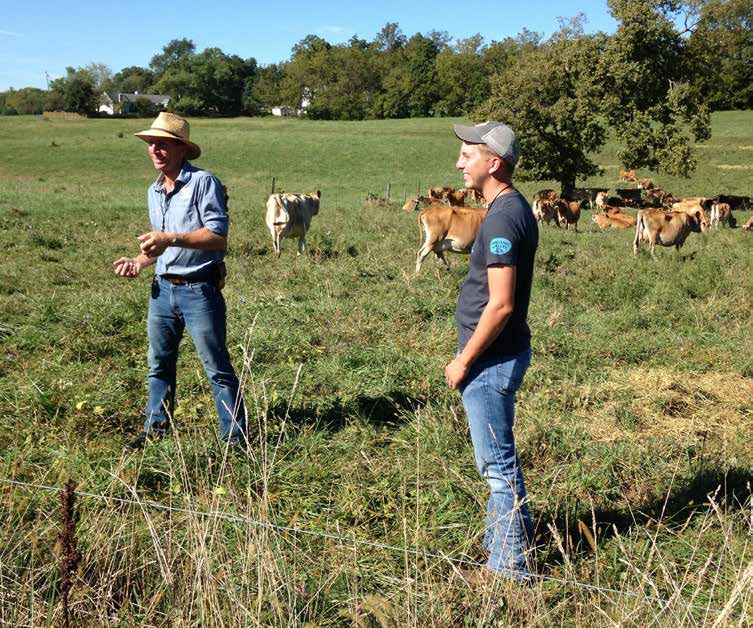 Currently, they have 135 milk cows- 88 are going into the bulk tank and 38 are nurse cows. The remainder are dry cows that are due to calve outside of the optimal seasonal calving window. Ron said, “We’ll either sell them as springers or freshen them and sell them in the fall.”

They use AI for the first few heat cycles and then add a bull to the herd. First calf heifers are exclusively bull bred. Fifteen years ago, they started using polled semen and now 85% of calves are born polled. Calving begins at the end of February. 80% of the calves have been born by the end of March, and the other 20% by the end of April. The herd is dried off by Christmas. “For us,” he said,” seasonal is the best model. God created cows to calve in the spring with green grass growing. That is the pattern we wanted to follow.”

Spring seasonal calving is also important for the nurse cow program they began nine years ago. Cows calve in a beddedpack barn but are quickly transitioned onto fresh spring grass. “When a cow calves, we want every calf to get colostrum from mama,” Ron said. “After that, we graft calves onto a nurse cow that calved the same day.” Each nurse cow feeds two calves; calves suckle for about six months.

Ron said, “We try to keep the calf pairs and their nurse cow separate for two weeks before they go into a group setting. By the second week of March, we begin putting them out on grass.” This year, the nurse cow group is 38 cows, managed in a grazing pattern separate from the milking herd. They are bull bred as well.

A cow is deemed a nurse cow if she exhibits poor behavior in the parlor or has a high somatic cell count. Some of them spend their lives as a nurse cow while others are pulled back into the milking herd. “It really is an excellent way to feed calves,” Ron said. “Not only are the calves well-adjusted to the pasture system, but we don’t have to peck around trying to get a fresh cow over mastitis. With a calf nursing them ten times a day, they get over it really quick.” 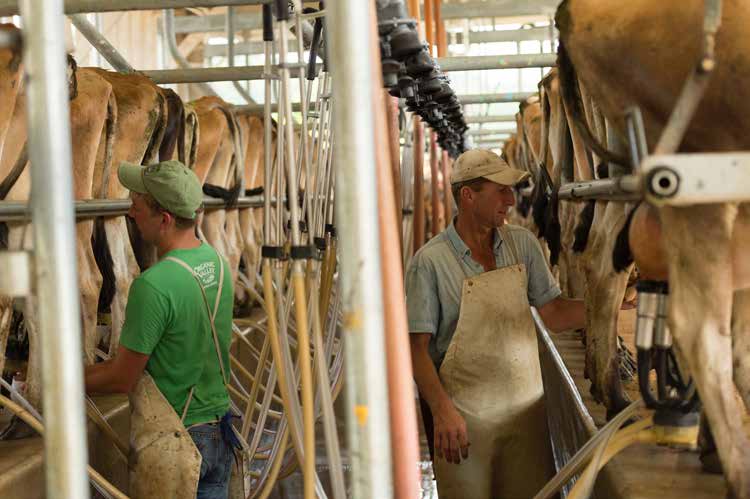 This year, Ron and Adam plan to raise 45-50 heifer calves. Typically, they raise 30 replacements but because of recent price cuts and Adam’s return to the farm full-time, they need to generate more revenue. Ron said, “Our land has healed and we can handle a slight increase in cow numbers.”

Ron and Adam also raise a large number of breeding bulls each year. They market both bulls and semen on their Purely Pastured Jerseys Facebook page. “That part of our business just sort of happened by word of mouth,” Ron said. All of the bulls they sell are polled and A2/A2 and Ron said, “I would use any of these bulls myself.” All of the bulls are descendants of the famous New Zealand bull Beledene Dukes Landy.

Not only do they not buy seed or calf nipples, Adam and Ron don’t buy grain. Due to cost and their beliefs that cows are meant to eat only grass, the grain scoop was ratcheted down over time. Grain was entirely eliminated in 2007, long before grass-milk gained acclaim. In fact, it was only two years ago that they were able to join a grass-milk route.

Since Organic Valley maintains its own internal grass-milk standards, Holterholm Farm is not required to have any additional grass-milk certifications. “I am though, one hundred percent in favor of a grass-fed standard across the United States,” Ron said. “I do hope the standards are administered through our organic certifier rather than a new and separate third-party verification structure.” (They are certified organic by Maryland’s Department of Agriculture.)

The milk cows and nurse cows are rotationally grazed on the home farm. Weanlings and bred heifers are grazed in a separate rotation two-miles down the road. Describing the layout of the pasture system Ron said, “It’s about a mile from one end of the farm to other and pretty much rectangular in shape. There is a major laneway that splits the farm in half and most of our paddocks are accessed from that center lane.” Dominant pasture species are orchard grass, blue grass, and fescue. 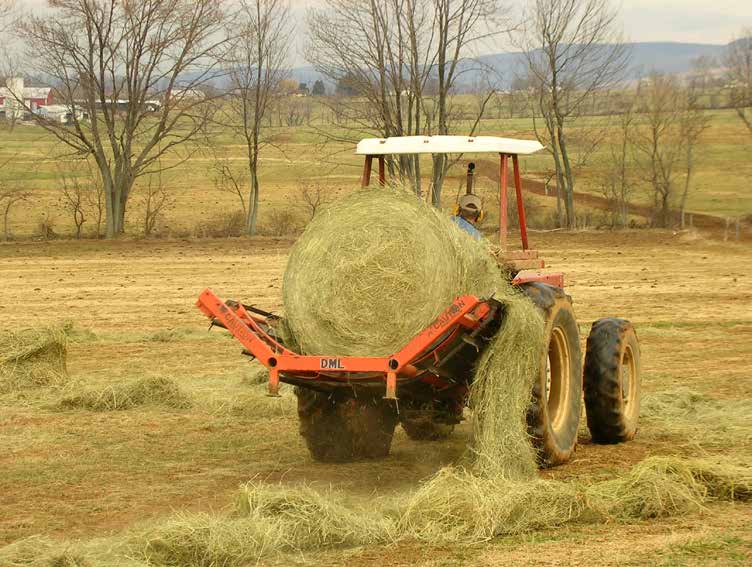 The high tensile perimeter fencing is two strands of 12.5-gauge wire. Interior fences are single strand 12.5-gauge wire and paddocks are further divided by single strands of poly-wire. 1 ¼” water lines run along the major laneway with a valve at every gate post. Water tubs are 55-gallon barrels cut in half, fitted with Jobe float valves.

The milk cows access a “salad bar” style mineral feeder on their way into and out of the parlor. There are 16 options available; the minerals come from Free Choice Enterprises. “The cows have the opportunity to pick or choose what they need,” Ron explained. “It’s amazing how they decide what they want and how it has changed over the years.” The nurse cow and heifer groups access their minerals from portable mineral feeders (made by Free Choice Enterprises).

In the spring and early summer Ron pre-clips with a doublebladed 9-foot I&J sickle bar mower leaving 5-6 inches of stubble. The German-made mower is powered by a 35-horse tractor. “It’s almost fun,” Ron said. He went to say, “I am not a tractor guy. I would rather do it with cows or by hand.”

In mid-June (when Ron was interviewed for this article) the milk cows were moving quickly through the pasture system, receiving three acres of pre-clipped pasture in the morning and three at night. “We don’t follow a particular grazing pattern,” Ron said. “We’re skipping and moving all over the place. We mix it up as much as possible to increase diversity and complexity.”

Ron prefers pre-clipping because the hoof action of the cows pushes the clippings into the top layers of the soil where there is biological activity. With post-clipping,” Ron said, “the thatch stays on the top and the nutrients in that grass are lost rather than feeding the soil.” 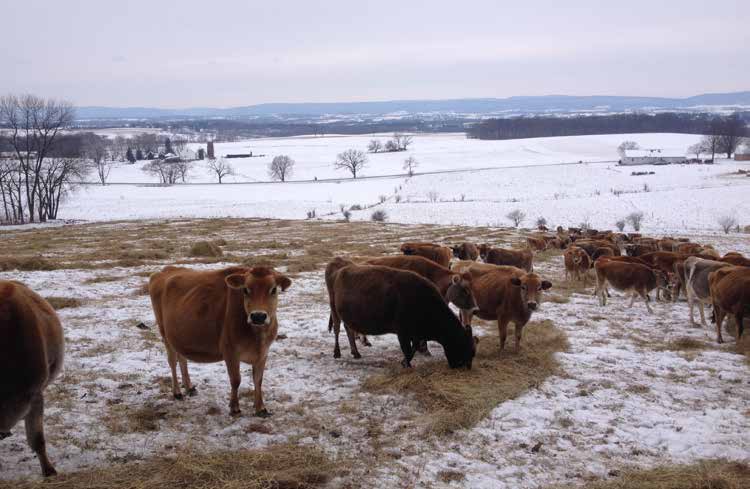 Ron continued, “This is not your manicured golf course looking type of farm. We are trying to grow hedgerows along our permanent fence lines. In doing so, we hope to create more habitat for birds and other animals and increase biodiversity. A lot of people weed whack under fence lines but we don’t. If you keep your cows full, your fences don’t need to be functioning at their fullest strength.”

By July they are usually done haying and pre-clipping. For the rest of the grazing season, Ron prefers to graze the pastures at 12-18 inches. “I try to leave one-third to one-half of every plant to begin building a stockpile over the entire farm,” Ron said. Although there is a 92-stall freestall barn from the farm’s confinement days, Ron and Adam choose to supplement the cows on pasture rather than feed them in the freestall. Ron said, “We only open the doors to the freestall for the occasional windy winter snowstorm.”

Instead, they have a New Zealand-made DML round bale unroller and the cows eat their stored feeds off the ground. They maintain this system through the winter, rotating their cows daily through the pasture system. Ideally, their winter paddocks are those from which hay was removed. This allows them to concentrate manure and forage refuse to help build soil fertility. With this method, Ron said, “At times we get impact but the land heals itself. We haven’t had to reseed.”

“The big thing for me is what it brings to my pocket,” he said. “I would rather make a meager amount of milk with beautiful cows and make enough profit to keep us going rather than have high numbers and lose my shirt.”