Please explain a bit of your personal history and farming background:

The farm is located in Antigo, Wisconsin which is 150 miles north of Madison. My grandpa bought the farm after World War II. My father bought it from him in the early 1960’s and then I bought it in 1999. The farming operations have remained pretty similar over the generations. We’ve always grazed our cattle.

I left the dairy out of high school and joined the Army, spending twenty years between active Army, Army Reserves, undergraduate, and graduate school. For ten of those years, I did social work and spent the first year out of graduate school as a 4-H agent.

I married in 1988. When we moved back to the farm in 1999, we had three children – 3rd grade
and younger. Dad was ready to retire and I had completed my twenty years in the military. The return to the farm was an opportunity for a change in our family’s life. I am also a deacon at a local Catholic Church.

Can you give us a glimpse of your farming operation?

We own 150 acres on a dead end road with woods surrounding three sides of the farm. Another 90 acres are rented from neighbors. We milk around 45 Holsteins and have another 45 head of heifers. Some of our larger cows have been crossed with Jerseys. The hybrids seem a bit more hearty and aggressive on pasture. Heifers are bull bred but we use AI on the milking herd. We added a milking parlor to our hip roof stanchion barn in 2005 and still use the barn for winter housing. In 2013, we added an addition to the stanchion barn for more housing.

We freshen the majority of our cows in the late summer and fall to take advantage of Organic Valley’s winter premium. Having a lot of dry cows in the spring and early summer means less time milking cows which allows us to focus on putting up quality forage. Our production goal is fifty pounds a day per cow.

Can you share some more details about your heifer program?

Young stock six months and younger are kept in the barn. Heifers six months to calving age are rotationally grazed and out wintered during the non-grazing season. In the winter, I feed the heifers dry round bales which I spread out in a large grazing paddock in rows of four. I section off four bales at a time with a break wire fence. The bales are put in ring feeders. Once they eat those four bales, I move the rings and break wire fence and keep moving down the field.
What does your forage program look like?

Our forage is stored in three 16’x60’ silos. Two get filled with haylage and the other with corn silage. We supplement our forage with shelled corn and occasionally oats. Sometimes I have my own oats to combine, depending on how weedy they get. If the weed pressure is bad, I chop the oats and put them in the silo. A local feed mill comes and picks up the corn and oats and salt that I provide them with. They grind it up, add minerals, and bring it back to the grain tank on the farm.

We do all of our own field work with a full line of used machinery that I bought from my dad. It was here and I’ve always figured that it’s better to use it than stick myself with monthly payments for new equipment. I’ve never been into custom work--why pay someone else to maintain their machinery?

Over time, I have redone all the fencing to better accommodate rotational grazing. Generally, I move the milk herd every 24 hours, although my current DGA Apprentice has been experimenting with moving the milking herd two or even three times a day. We’ve also been investing in raised reinforced lanes through NRCS cost-sharing.

When and why did you decide to become a DGA Master?

I became a Master about two years ago. The practical answer as to why I became a Master is that my kids all grew up and left and I needed help. But there is more to it than that. The only way I can put it that makes any sense is that in my life I have always looked at the direction that the Spirit moves me. We all have a purpose in life and we find it if we pay attention to what goes on around us. Everybody has a purpose and my purpose is to pass on what I know and to leave the world in a better place. DGA is a vehicle for me to accomplish this. If I can help jumpstart even one dairy farm family, then I will feel like I have accomplished something. 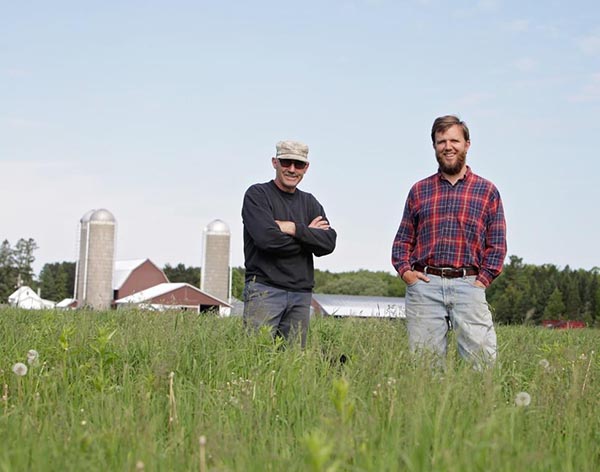 Tell us about your current DGA Apprentice. What are his plans when he completes his Apprenticeship?

I have one Apprentice named Brian who is in his late 20’s. He is my first Apprentice. I have already lined up two more Apprentices, both of whom are currently serving in the military.
Brian and his family have been here for 1½ years and will be leaving in March, 2017. They live on the farm in a rental house. They are lining up to buy a farm a few hours from here with the intent of shipping wholesale grass milk. The retired farmer is the area DGA Education Coordinator who monitors and helps keep the area apprentices on track. This has been an added bonus for Brian. I think it is absolutely critical to have a transitional mentorship once an apprentice buys his/her farm. I know it was important for me to have dad down the road keeping an eye and helping out when I came back to the farm after being away for 20 years after high school.

How do you find an Apprentice and what are your thoughts on vetting candidates?

I found my current and future Apprentices through the DGA website. As a Master, I have access to applicant’s profiles which I try to peruse every so often. Many of the people applying are really interested in farming and may even have a farming background. From my perspective, some people are looking for more of an experience. I want to find somebody who seems like they have more than a 50% chance of actually pursuing a farming career. I think they’re more likely to stick it out. What I am not interested in is finding someone that is just looking for an experience or has a Pollyanna view of farming. So many people seem to have a romantic and idealistic view of what farming is. Don’t get me wrong- I love this, but it is anything but romantic. I am looking for someone solid who is looking to give an honest effort.

What comes next after you’ve found someone who fits these criteria?

Basically, I invite them for an overnight at the farm. We have an informal interview over the course of their stay and do some chores together. I try my best to gauge whether or not we have similar values and goals, and if they are sincere. My aim is to be as upfront as I can about what I can offer and what my expectations are. The ultimate question I ask myself is: are our goals compatible with one another?

How do you approach compensation? Do you offer any incentives such as heifers at the end of the Apprenticeship?

DGA has specific requirements for Apprentice compensation. Within these requirements, my current Apprentice and I agreed on a base salary of $20,000/year. On-farm housing is deducted from his salary. Housing includes sewer and water but he pays electricity, heat, and telephone.
Paying wages directly seems neater and easier to me than selling animals to an Apprentice. What if he doesn’t end up farming and has a dozen animals that he needs to deal with? I would rather not have to worry about the unforeseen and personally don’t care to keep track of that kind of stuff.

Do you have any advice for how to structure the schedule of an Apprentice and do you have regular meetings?

We don’t have formal meetings but it seems that there are natural times that we are together during the day, primarily at milking time. My current Apprentice is a very self-evaluative person which has made it easy for me to provide feedback. I do think it is important to spend a lot of time with your Apprentice. Brian and I milk together nearly every evening, not because we both need to be there but because it is a time to connect with one another.

What are your thoughts on an Apprentice who has little or no experience with operating equipment?

This is less of a barrier than I would have thought. I think the key thing that needs to be determined is if the person has mature judgement or not. When you interview, you should certainly ask questions about the applicant’s driving record, if they have experience with 4-wheelers or off-road vehicles, etc. If you can pick up anything that indicates that the person is reckless it would be a red flag. It speaks of poor judgement and poor reaction.

When my current Apprentice arrived he had never driven a standard transmission, but he is careful and deliberate. Now it’s our second summer together and he does just about all of the field work. He can mow, chop, disk, drag, and plow. Equipment experience adds up quickly when you’re doing it every day.

How do you keep your Apprentice motivated as they move through the two-year program?

I do not consider it my job to keep an Apprentice motivated. That is his job. Ultimately, you have to be self-motivated in order to become a successful farmer because if you don’t do it yourself then it won’t get done. The Apprentice is going to take out of the experience what they want to.
We recently had a meeting of Master Graziers and discussed how to ensure people are successful once they have completed the DGA program. The reality of it is that colleges put people out into the world with a four-year degree, oftentimes with a significant debt load, and the colleges don’t worry about whether or not their graduates are getting a job. You either use it or you don’t. Masters can’t take on more responsibility than the person going through the program. 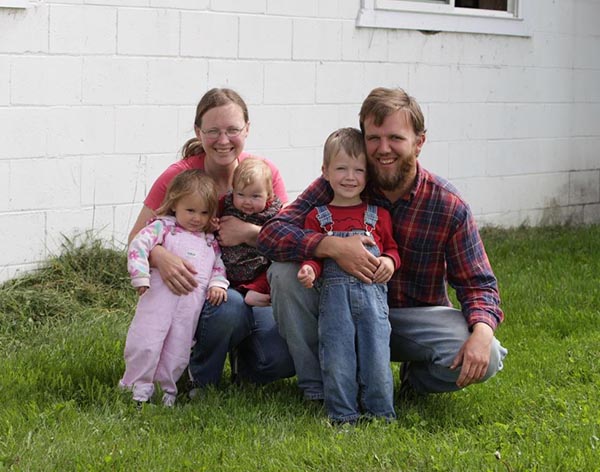 Apprentice Brian with his wife Katie and their three children, George, Elizabeth, and Marjorie

What thoughts do you have on ensuring a successful Apprenticeship?

The best thing is to be honest, respectful, and do a lot of listening. Listening for things that aren’t said is also important as is learning when to ignore one another. I learned a lot of this in social work, though some Masters might not have these skills in their toolbox.

Another critical element is to have a positive attitude about farming and life. I see a lot of negative attitudes about farm life and how difficult it is. In some ways, I understand these attitudes but it’s really not that bad. You can see it half empty or half full and you have to see it half full. Apprentices need that. If that perspective is missing then you start questioning why the heck you are doing this.