“Wealth and production are two different things – our focus is on wealth; we milk acres, not cows”, says Cliff Hawbaker. He and his wife Maggie own and operate two organic, no-grain, dairy farms in South Central Pennsylvania. Their mission, “To explore and manage dairy related resources with a focus on wealth accumulation and quality of life for employees and family”, guides them through all their decision-making.

The home dairy, Hamilton Heights Dairy Farm in Franklin County, has been in Cliff’s family for 6 generations. The Emerald Valley Farm in Cumberland County was purchased in 2005 and is currently being managed by Cliff’s nephew, Daniel Lehman. They farm 869 acres of which 180 are rented and 689 are owned. Crops grown include 660 acres of fenced pastures, 110 acres of hay land, and the rest is wooded.

The Hawbakers milk a total of 425 cows and have an additional 281 young stock of varying ages. Their cows are all crosses from three different breeds: Holstein (their original breed), Jersey (for size and milk components), and Finnish Ayrshires - a dual purpose breed with excellent body condition, and genetics that adapt well to grass. They started cross breeding their cows around the same time period that they purchased their second farm (2005). Their goal with cross breeding has been to move from the 1450 lb Holstein that they used to milk, to a smaller cow, about 1100 lbs, with good condition, greater longevity, and good grazing efficiency. Cliff is happy with what they have today, acknowledging that most of their cows are closer to 1250 lbs, but they have the stature that they were shooting for with great body condition. 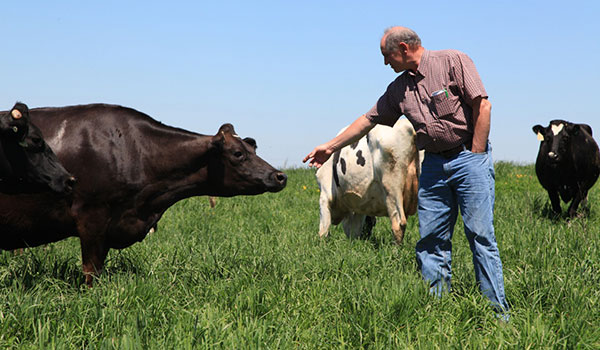 Cliff Hawbaker with some of his cows

Prior to having a grass-based farm, Cliff was milking 3 times a day, feeding his cows in confinement and producing 21,000 lbs of milk per cow. Interested in improving herd health, balancing the soils, crops, and improving their nutrient management practices, Cliff and his family made a big leap from a confinement dairy to a pasture-based operation.
They started gradually in 1998, with 20 acres the first year and 50 acres the second year, offering pasture primarily to their dry cows and first calf heifers. By the year 2000 they quit growing crops on the home farm (Hamilton Heights Dairy) and converted the whole farm to pasture. Putting the infrastructure in place took a couple years and included seeding pastures to perennial swards, and building fence, laneways, and water systems.

With a desire to reduce some of the animal impact from the home farm, the Hawbakers had an opportunity to purchase what is now known as Emerald Valley Farm in 2005. They started milking cows there in 2006 and spent the next two years fencing it and planting perennial swards.

Cliff talks about his pastures in a way that articulates his deep understanding of his grass-based system and his ‘whole [farm]
under management’;“I can see, taste, and feel the pasture”, he says. This depth of understanding did not come to him over night. Cliff realizes that for anyone new to grazing and organic production, they need to learn fundamental entry-level concepts before diving into management decisions more appropriate for a seasoned grass-based farm. “We need to be careful about the advice that we give new or beginning farmers,” he says. “Trying to take on graduate level concepts when you are only needing High School level concepts is dangerous; you could lose your shirt.”

Cliff makes sure that his pastures are still in the vegetative stage when they are ready to be grazed, and manages the livestock so that they “take half and leave half”.
As a rule he also likes to select some of his acreage each year and give that land a rest. Those fields become summer stock-piled pasture; a practice that is a gain for the land and the soil biology. At the end of the grazing season Cliff puts a lot of animals on the fallowed acreage and the livestock graze and trample the forage, benefiting the soil biology, and keeping his livestock on pasture as far into the winter months as possible. “Give yourself a rest, let everything go, then put a lot of animals on it. You don’t lose, you actually gain”, says Cliff.
With Cliff’s grazing model, he is convinced that the wealth on the farm will double between 7 and 14 years. When mentoring others, Cliff encourages farmers to focus on land, grass and the art of grazing. “Grass is #1. What is the right thing to do at the right time for the right reasons? All of our existence comes from the sun. If you appreciate and respect life, then your system will be sustainable,” he explains.

Once a day Milking

In 2006, Cliff and his family decided to switch to once a day milking, reducing labor and certain operational expenses, while adding quality to their lifestyle. They started first with the Emerald Valley farm, and then followed suit in 2008 with their Hamilton Heights Farm. Though overall milk production went down, milk solids increased and costs of production went down.

Additional time for tasks such as calving, breeding, haying, managing the pastures, and family has benefited both farm enterprises. 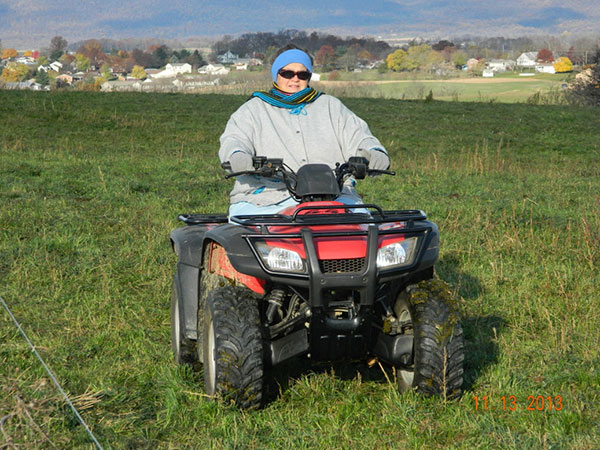 With two grass-based dairies in place, they entered what Cliff refers to as ‘the learning years’. The economy took a dive in 2008, conventional milk prices started to plummet in 2009, and there was a drought in 2010. Having grass-based operations probably helped them survive through these tough years a little better then others.

In 2010, a few of the organic milk buyers started to visit Cliff, encouraging him to transition to organic. At the same time, there was a growing interest in grass-fed organic milk with added premiums being offered. Cliff and his family decided that certifying their farms would fit with their farm mission, but they would not steer from their grass-based principles of milking acres, not cows. Cliff is quick to remind people that “the cake is in the pasturing & good management. The Price for organic milk is the icing on the cake”

They began their transition in 2010; transitioning the land was not difficult, as it had been managed according to the organic standards for over 3 years. They had to feed and manage their livestock organically for a full calendar year to complete their one time whole herd transition, but since they weren’t feeding any grain, the financial burden for their transition was minimal. In 2011 they started shipping their milk to Trickling Springs, a creamery located just down the road from them their home farm that produces organic grass-fed milk products including butter, fluid milk, cream, yogurt and raw milk cheeses.

The Hawbakers raise about half their heifers each year, keeping enough of their replacement stock to maintain a 20-25% cull rate. Calves that remain in the herd come mostly from dams who conceived on first conception. Calves that don’t stay on the farm are normally sold at 1-2 weeks of age. Animals who do not gain well in the first 6 months do not stay in the herd for very long.

They have a dual season calving system in which 70% of their cows calve in the fall and 30% calve in the Spring. The pay price for fall/winter milk tends to be higher for most organic producers due to winter milk premiums, but Cliff is convinced that fall calving is also most profitable for the grasses, the land and the livestock. He explains that when a fall calving cow is in the tail end of her lactation (May), and she is grazing nutritious spring growth, she will gain condition, the high quality pasture will contribute to growing a healthy calf, and her milk production will increase. Calving in August or September is also a great time of year for a calf to get started.

These days, because their herd so seldom has health issues, Cliff feels like sometimes he doesn’t have enough practice on how to deal with them when they happen. If he gets an acute case, he will usually call a fellow farmer or a veterinarian for assistance or advice.
Cliff focuses on high microbial life for the soil, and a strong immune system for the livestock, calling it the ‘engine that keeps the animal healthy’. “When we focus on the soil with grasses, we also need the right number of animals to match the forage production,” says Cliff. When he addressed that on his farm, it came alive.

Cliff spends a lot of time staying connected with fellow producers, speaking at conferences, and mentoring new/young farmers. When he is looking for information, he reaches out to his fellow farmers all over the world. He also has a small group of Northeast producers that he stays in touch with during the growing season. With the same or similar weather conditions and season, and doing similar things, they make a point to have weekly phone meetings to check in, share, and ‘sharpen their tools’ together. “It is a give and take,” says Cliff.

When it comes to networking and searching for information, Cliff has a saying that he follows: ‘have a one-on-one relationship if it is a farmer, but keep outside influences at arm’s length’. This means that he learns from his fellow farmers, but individuals such as his milk buyer, veterinarian, feed dealer, NRCS agent, seed dealer, etc can only advise him on what they think. Most of these individuals don’t have boots on the ground; they are not in the trenches farming every day and putting these ideas into practice.

Cliff also spends time helping young farmers get started with grass-based farming. He often speaks at conferences where he gives a couple different types of talks: One is focused on his personal journey of their two farms, sharing their grazing experience, and their “Green is Grass” approach to managing their farms. The second talk he likes to give is one on business planning for graziers, focusing on where you are and where you want to go.

These presentations often bring opportunities for Cliff to mentor a few farms through an in-depth, 8-step procedure that he has created. Through his mentoring and his talks, he brings to the table certain concepts and principles to farming that have brought him to where he is today:

All livestock sold must go back into dairy/cow acct to address land, livestock, retirement, and capital expenditures. “You cannot sell an animal for the cost of production,” says Cliff, “that money cannot go to operate the farm. That is life that you respect and honor; it is a gift.”
We manage for what we want from our goals; we must have a margin for every input, but cannot take away from our original investment of the land.

“A tractor is expensive to operate and will have zero book value in 5-10 years; livestock will always have a value”.

“At the end of life, it is the land and the legacy that you leave behind”