Located in Northwestern, New York in a small town of about 4,000 people, sits a small organic dairy farm that likes to ‘keep things simple’. Their uncomplicated approach has earned this farm not one, but two National Milk Quality awards (in 2011 and 2013) from their milk buyer, Horizon Organic. With a total of 600 plus farms shipping to Horizon Organic, this is an award that the Sheens are very proud of.
The Sheens milk about 40 cows year round and own 348 acres of which 200 are tillable and 140 acres are designated for pasture – though all the land could be use for grazing if necessary. Their cows produce about 10,000 lbs of milk/year with average Butterfat and Protein of 4.02% and 3.03% and a Somatic Cell Count (last time they checked) of about 79,000.

So what are some of the things that Jeff and Sharon do on their farm that contribute to producing such a high quality milk? 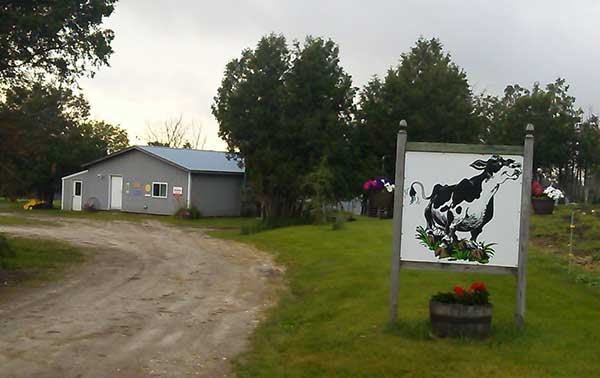 They started dairying 15 years ago ‘more to have fun, than to make a living’, says Jeff. Prior to dairy farming, Jeff had done about everything, including driving a feed truck and working in a feed mill. Sharon had grown up on a dairy farm and loved the lifestyle and the connection to the land. Once their three boys were old enough, she knew that she wanted to make the time to have a farm of her own.

One day, Sharon told Jeff that if he built her a little parlor and barn, that she would milk 30 cows. Well, that is all she needed so say. During the time that he had been delivering feed, Jeff managed to see many types of barns, parlors and livestock housing systems. He took pieces that he liked from many operations and built a freestall barn and a milking parlor (7 to a side with swing units) that met their management style and needs for a small herd.

Before diving into dairying, Jeff and Sharon put pencil to paper and drew up a budget, based upon a pay price of $11/cwt. At the time (late 1990’s), with very little debt, they figured that they could make a modest living - even off of $11 milk. They would have loved to have borrowed some money to speed up their new dairying career, but getting a loan was not in the cards for them – and turned out to be a blessing in disguise. They approached a bank to finance the construction of their facilities, but were rejected with the promise that once the buildings were in place, they could get a loan to purchase the cows. But after the infrastructure was there (house, barn, milk house), the bank still would not lend them money to buy cows. As a result, they grew slowly on their own with no additional debt.

Starting their farm without a loan forced the Sheens to be frugal; designing a free stall barn and a milking parlor that was affordable, and growing their herd at a pace that they could manage. Their barn and parlor was financed and constructed by the Sheens alone; when something breaks or needs repairs, Jeff is the one to do it. At a certain point, the herd was large enough so that Jeff could quit his job and join Sharon as a full time farmer. “If you want to make a living on 30 cows, you can survive and be happy on 30 cows,” says Jeff.

The first 5 years of their dairy career was spent shipping milk to the conventional market, and when they made the transition to organic dairy farming in 2004, there was only a small difference in the pay price, though organic was a little higher. What attracted Jeff and Sharon most about organic farming were the principles and practices. The only management practices that they had to give up were dry-treating their cows and the occasional antibiotic treatment. Looking back, Jeff thinks that he gave antibiotics more credit than they were due.

About the Dairy Herd

The dairy herd consists of mostly Holstein cows with a few Jersey crosses. Jeff is the first to admit that he is not much of a Jersey fan, though he knows that the few Jerseys that he does have in the herd are excellent graziers and ‘nothing seems to bother them’. The quieter, less emotional nature of the Holstein, however, is more his cup of tea. The herd consists of 25% 1st lactation cows, 25% 2nd lactation cows and the remainder of the herd is in its 3rd to 5th lactation.

Cows are bred using bulls – sometimes picking a bull from their own herd and other times purchasing from off the farm to bring in some outside genetics. They tried using AI a few different times, but found it takes too much time to isolate the cow and then they worry about the breeder bringing disease onto the farm. It just seems easier to put the bull out with the cow and their job is done.

All the heifers are kept on the farm as replacements, though about 4 years ago, their farm got a little overstocked and they decided to sell 10 springing heifers. Milk prices were good at the time, and they sold those animals for $2500 a piece. If another surge in heifer calves arises, they know that there is an opportunity for some additional income.

There is no tolerance for illness or unthriftiness in calves. If a heifer is looking ‘off’, then she leaves the farm. Jeff and Sharon don’t want to spend time doting on a sick animal as it uses up their precious time and the longer a sick animal stays around, the greater the risk that other animals will also get sick. 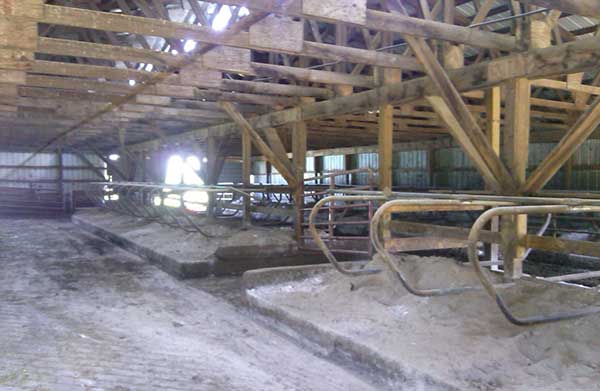 Free stall barn with 50/50 ratio of sand and lime.

There are not a lot of health issues on Jeff and Sharon’s farm and they credit a lot of that to the fact that the cows are housed in clean conditions, are fed a high forage diet, and are not pushed for production. They haven’t had to trim their cows’ feet for years. The last time they had a vet on their farm for a cow problem was about 10 years ago. They used to have a vet do pregnancy checks for them, but he is too old to perform the task now. To stay on top of calving dates, breeding, and dry off, they use a breeding wheel that Jeff designed. It is color coded to indicate when each cow is pre-fresh, bred, and dry. As the cow gets closer to her due date, they bump the calf to determine when to dry the cow off. This low-cost system works well for them.

The current grazing system consists of 6-7 paddocks, that the cows rotate through, moving to the paddock that looks like it has the most/best feed, and clipping pastures that get ahead. Sometimes the surplus feed gets harvested and other times the clipped feed will be left to return to the soil. Jeff is currently working on a new pasture design that will allow for centrally located, 300-gallon water tubs to service 2-3 paddocks each.

During the grazing season, the milk cows get 6 lbs of 16% grain plus pasture. Dry cows and heifers get 100% pasture, calves less than 6 months get a little grain and dry hay, and yearling heifers get pasture and a little grain. All animal groups get free choice access to Redmonds salt. During the winter milk cows get 6 lbs of 16% grain, baleage, and access to dry hay.

The Sheens are in their second year of growing oats, but the jury is out as to whether or not they will continue growing this annual crop. Last year they seeded 35#/acre oats with grass seed and harvested the oats as oatlage. After the forage regrew and recovered, the cows grazed the regrowth. Though the cows produce well on the oatlage, Jeff was not happy with last year’s yields. This year, he is going to plant 100# of oats/acre with a pasture mix and he will evaluate this system again to determine if this is a practice that he wants to continue.

New Ventures on the Farm

Recently, Jeff and Sharon started a small beef herd to diversify their farm income streams. They purchased some Angus beef from a neighbor a few years ago, and put the beef bull in with the dairy herd, keeping the offspring as beef animals. They now have 33 calves/cows and some steers. When they need more dairy stock, they switch out the beef bull and bring in a dairy bull. The steers go through the local sale, which works well, as the conventional price for feeders is excellent. At some point, they might look into retailing their beef animals from the farm.

The Future of their Farm

Jeff and Sharon have 3 kids; their twin boys are 24 and live close by, but do not plan on returning to the farm. Their youngest son, Brian, is 18 and graduates this year, and they don’t see him taking over the farm either. This farming team rarely gets a day off; the last time they had time away was when they went to the Farm Aid concert last September. Finding someone willing to work for $20/hour to milk their cows is next to impossible, and that is discouraging to them. It is uncertain how much longer the Sheens plan on farming, but one thing that they are feeling is a need for some regularly scheduled days off.

But farming brings a routine and an active life that resonates well with Jeff and Sharon. It is rare that they are apart from each other, as they share every aspect of the operation – from milking, to feeding cows, to cropping, to farm records and finances. They started farming to have fun more than to make a living, and by the sounds of it, they are managing to do both.