Stonewall Farm is a nonprofit working farm and educational center whose mission is to connect people to the land and the role of local agriculture in their lives. They operate a 30-cow certified organic dairy, which has been in operation for over 125 consecutive years (under various owners) and is the oldest and only working dairy farm in Keene, NH. Set in a scenic valley, it consists of 70 acres of pasture, 15 acres of crops/gardens, and 30+ acres of wetlands, woods and hiking trails. Other parts of the farm include chickens, goats, rabbits, ducks, llamas, draft horses, a Community Supported Agriculture (CSA) garden, special events throughout the year, and an Education Center (open 7 days a week) which draws 20,000 visitors per year.

The job of their non-profit organization, as Executive Director Josh Cline so aptly puts it, is education; showing farmers what can be done on a smaller scale and opening their doors to schools, kids, and families so that they can build connections with the food that they eat. 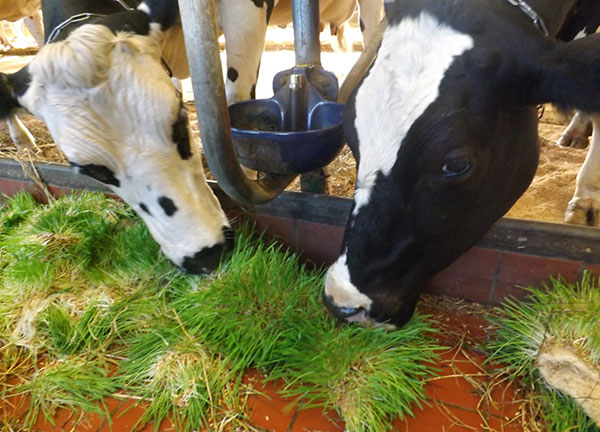 The dairy farm has been certified organic since 2007 using the NH Department of Agriculture, Markets & Food as their certifier. Their motivations for getting certified was for the increased income they would receive for their fluid milk, the anticipated improvements in their dairy herd health, and the environmental advantages.

Since transitioning to organic, livestock health has definitely improved, and milk quality has been exceptional. The farm was recently awarded the 2013 Gold Award from Organic Valley and a Silver in the 2013 National Dairy Quality Awards, a program of the National Mastitis Council. “This is a testament to our farmers, Glenn Yardley and Wendy French, whose care for the dairy herd, attention to detail, commitment to organic practices and pride in their work has now been recognized on a national level,” says Stonewall Farm Executive Director, Josh Cline.
Housing, Feeding, and Pasture System

The 30-cow dairy herd consists of 65% registered Holsteins, 30% registered Brown Swiss, and a couple Holstein/Normande crosses. Average yearly production is 18,000 pounds per cow with butterfat at 3.6%, Protein at 2.9%, and other solids at 5.7%. Cows range in age from 2 – 11 years of age with the average age being 6 years. 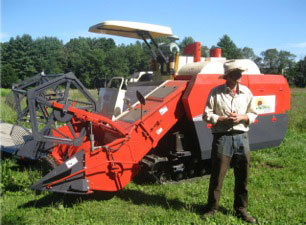 Dorn Cox with his small combine

The farm has a 30-cow tie stall barn with manual ridge vents and thermostat controlled windows on both sides of the barn. The cows are milked with a pipeline milking system. Heifers are kept in a 3-sided open front barn with 3 sections for the different age groups and calves are started in calf hutches with an attached fenced run area where they are raised until weaning age.

During the growing season the cows are rotationally grazed, getting new sections of pasture after each milking. Yearlings and bred heifers are pastured in a couple large fields at two of their neighbors’ properties during the summer months, and calves 6 months to a year are pastured at the farm.

Grain is fed to the cows 3 times a day; morning milking at 3:30 am, before turnout at 8 am, and then at evening milking at 3:30 pm. The amount of grain fed depends upon the amount of milk that the cow is producing; 1 pound of grain for every 4 pounds of milk. Protein and energy in the grain, is determined based on the quality of the stored feed and pasture being fed. Farm Manager, Glenn Yardley, and Herdsperson, Wendy French work closely with Nutritionist, Mike Thresher, of Morrison’s Custom Feeds to make sure that the cows are getting a balanced ration. In the winter, cows are fed hay and baleage to replace the pasture part of the ration, and heifers are fed grain and hay 2 times a day.

Calves are fed 2 gallons of whole milk per day and are started on a 16% heifer pellet (free choice) at 1 week of age. At one month they are offered free choice hay, grain and water, and are usually weaned from milk at 2 months of age.

Since most of their dairy acreage is used for pasture, Wendy and Glenn make sure that the forage on the stem is well cared for before and after grazing. Pastures are brush-hogged and chain-dragged right after the cows have grazed. This practice happens after the first 2 grazing rotations. Water is provided in each paddock using black plastic pipe and portable water tubs, and Redmond’s trace mineral salt is offered to the cows, free choice. For soil amendments beyond the daily dropping that the cows leave behind, they spread potash on the pastures in 2013, and normally spread manure in the fall. 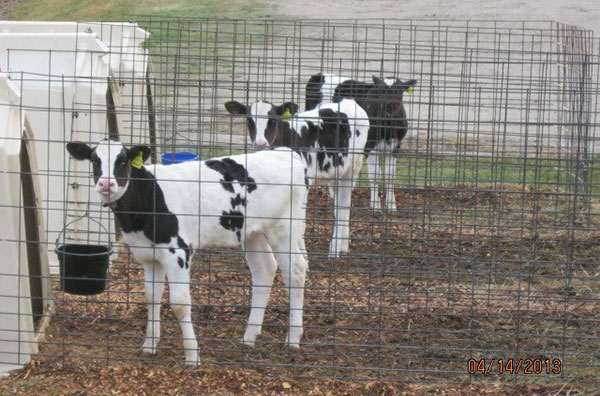 Since their transition to organic dairy, Glenn and Wendy have noticed a huge improvement in their cows’ health. The calves grow a lot better on whole milk, the cows have fewer calving issues, and it is rare that they see cases of milk fever, retained placentas, and ketosis.
Prior to their organic transition, the farm had 3-4 retained placentas each year and half a dozen cases of milk fever. Today, Wendy can’t remember the last time they have had either of these situations on the farm. For the occasional mastitis case, they give the cow garlic tincture 2 times a day for 5 days, Aspire (whey injection) 1 time a day for 3 days, and liniment rub. Traces of mastitis are usually gone within 36 hours.

Their veterinarian is very good to work with and comes to the farm once a month for pregnancy checks, vaccinations, dehorning calves, and anything else that may need attention. Their vaccination program includes Bovashield at 3 months of age, a booster 4 weeks later, just before breeding at 15 months, and once a year for the lactating cows.

Value-Added on the Farm

Being a working farm, an educational center, and a non-profit, the costs of operating the dairy farm is somewhat higher than what one might spend on the average 30-cow farm. As cost of production continues to climb faster than the pay price for organic milk, Stonewall Farms has found that their dairy farm is losing money. They bring in $160,000 from milk sales, but spend $120,000 on forage and grain, leaving only $40,000 to pay for two full time staff, insurance, and operating expenses.

With a retail store on the farm, there are a growing number of people coming to the farm to purchase their vegetables, meat, eggs and dairy products. True to their mission, Stonewall Farm’s customers become more aware of where their food comes from and how it is produced; they can see how the land and livestock are managed, how the various crops are grown, and become more familiar with the common tools and day-to-day work that takes place on the farm. And when products are purchased on the farm, there tends to be a higher profit margin returning to the farm enterprise, validating their decision to focus more on value-added product development.

Value-added dairy products currently sold on the farm include: raw milk cheddar cheese, plain and vanilla flavored yogurt and beef from their cull cows. The cheese is made from their milk which is sent to the Grafton Cheese Company to be made and then retailed on the farm. Yogurt is made using a 40-gallon Vat Pasteurizer, from Micro Dairy Designs (www.microdairydesigns.com). They have also purchased a pump, chiller, and a bottling system from that same company, which is currently being used for their yogurt making, but which could easily be used for bottled milk if they choose to go that route.

Though New Hampshire law allows for the sale of raw milk from the farm, Stonewall Farm is not allowed to sell milk due to an agreement that they have with their current milk-buyer. This situation may change this year as Stonewall Farm is gauging the interest of having a year-round Milk CSA. They have estimated that if they sell 150 milk CSA shares (about 75 gallons a week), the income generated from that would match the current income that they receive by shipping their organic milk to a wholesale buyer. The rest of the milk not used for their milk CSA, would go to cheese or yogurt, or would be sold to a bulk milk buyer willing to work with them – which means that their surplus milk may be sold on the conventional market. 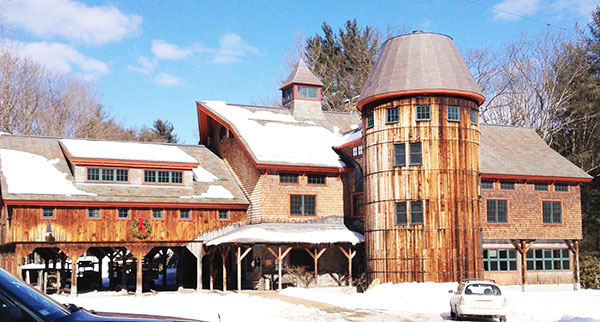 As an educational non-profit, Stonewall Farm likes to look at a number of creative cutting-edge practices so that they can share their successes, mistakes, and educate current and future farmers. They are also pulled in the direction of fiscal responsibility; they need to make sure that they are covering their expenses. They often count on grants to cover the extra labor involved in implementing and documenting the new practice(s) and to absorb some of the risk.
The farm may be small, but the board and staff feel it is important to share their knowledge and experience. Performing field trials in collaboration with others, and opening the farm to share their findings attracts farmers and builds opportunities for collaboration with universities, organic educators, federal agents and other resource professionals. It also means that decisions about large investments take some careful consideration from the farm’s board of directors.

Last year the dairy farm took an interest in feeding sprouted grains. They decided that before investing $50,000 into a system needed to feed their 45 cows, calves and heifers, they would purchase a micro fodder system (from Farm Tek) and feed it to just 3 of their cows. They fed them 5-10 lbs of fodder in place of 1/3 of their grain ration (about 5 lbs) and evaluated palatability, total feed intake, milk production, cost, and overall cow health. They are very happy with the response and feel confident that the fodder system could save them at least 30% in their total feed costs. Another piece to the puzzle that they want to address before jumping into sprouted grains is growing their own fodder feed.

During the 2013 growing season, Stonewall Farm planted a couple acres of spring Barley. They have been working with Dorn Cox of Green Start (www.greenstartnh.org) who has a small combine harvester as well as the equipment, technology and know-how to help the farm adopt scale-appropriate systems on their farm for planting, harvesting, drying and storage of small grains. They were very pleased with the yield last year (1,500 lbs/qcre), but want to try winter barley this year to see if they can reduce the weed pressure. Stonewall Farm is aligning itself with organizations such as NOFA-NH, University of New Hampshire, National Center for Appropriate Technologies (NCAT), and NRCS in trialing different types of fodder grains and fine-tuning the system while also evaluating the sprouting quality, yield, and weed management. They will be opening up the farm to a workshop on growing small grains sometime this summer. All are welcome. 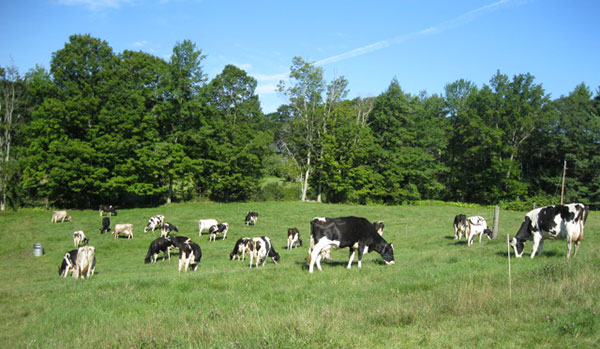 When asked how to better serve the organic dairy industry, staff at Stonewall Farm said that they would like to see more colleges offering dairy courses including hands-on education; teaching organic versus conventional practices. Seeing the need for this type of information, it is probably no surprise that Stonewall Farm is in the process of putting together it’s own 1-year school program called the ‘Stonewall Farm School’.

Participating students will get a full calendar year of hands-on farm education - be it dairy or vegetable production. The tuition covers lodging and a small share of the farm products each week. Students will also be given an opportunity to blend that experience with a degree through Antioch New England University. Stonewall Farm Executive Director, Joshua Cline, is excited about the prospects of working with Antioch University to firmly establish an MBA in Farm Business Administration.

The 14th Annual NODPA Field Days will be at Stonewall Farms this Fall! There is a lot going on and much to see at Stonewall Farm and we hope that everyone comes to the farm this fall (if not before) to see the results of the 2014 growing season and to participate in NODPA’s 14th Annual NODPA Field Days taking place on Thursday and Friday, September 25-26, 2014. Don’t miss it!