From Wholesale Milk To Value-Added

Editor’s Note: In March, 2008, the NODPA Newsletter featured Kimball Brook Farm, one of Vermont’s largest organic dairy farms, located in North Ferrisburg, Vermont. In this article, Cheryl and JD Devos shared their transition experience, animal housing, herd health, and pasture management practices. This article is a follow-up on Kimball Brook Farm as a lot has changed for this 200-cow dairy. Cheryl and JD decided to take the road of value-added production and retail sales, challenging themselves and pushing their marketing and creativity in ways that they never would have imagined. Their story is an inspiration.

At the time the Feature Farm article had been written in 2008, Cheryl and JD Devos had been shipping organic milk for almost 3 years, and though they were very grateful for their market, they were starting to notice how the pay price for their milk was not keeping up with the rising costs of production. It is not in their nature to sit idly by and watch their margin continue to shrink, so they started to actively look into ways in which they could add value to their milk and earn a higher profit for their product.

Having recently completed a Farm Viability study on organic milk production, Cheryl and JD turned to marketing consultant, Rosalie Wilson, to help them research some of the many ways they could enter the world of value-added milk production. Bottling organic milk became the venue that they were interested in the most, and with a year of market research and pushing a pencil on infrastructure needs, they knew that they would not be able to finance a venture like this on their own; they would have to look for investors and grant opportunities.

In 2010, the Slow Money Conference came to Vermont, and Cheryl decided to use this venue as a place to ‘pitch’ their idea of starting an organic dairy creamery in the Champlain Valley of Vermont. To do that, she needed to prepare a 2-minute talk in which she would sell her idea to an audience of possible investors and fellow entrepreneurs. Her efforts were rewarded! Cheryl got a commitment from a local investor who had been aware of their venture, but had not yet decided to support the effort. With the commitment of their first investor came support from others within that network. In the end they raised $500,000 from a total of 20 investors ranging in size from $5,000 to $250,000. With that upfront investment, they were successful in taking out a loan from the bank.

Over the next couple years, Cheryl and JD worked hard getting their creamery ready for production. It was not an easy road and they went over budget by 20-30%. But their vision was catching the eyes of many and in 2011, Kimball Brook Farm was awarded the Dairy Farm of the Year award by UVM Extension and the VT Dairy industry Association. Shortly after receiving this state-wide recognition, Cheryl and JD found out that the Value-Added Producer Grant proposal they had submitted had been awarded – to the tune of $300,000 – through the USDA’s Rural Development Value-Added Producer Grant Program. This money could be used to provide capital resources necessary for business growth and job creation.

About Slow Money
(www.slowmoney.org)
Inspired by Woody Tach’s book Inquiries into the Nature of Slow Money: Investing As If Food, Farms and Fertility Mattered, published in 2009, the Slow Money Alliance is bringing people together around a new conversation about money that is too fast, about finance that is disconnected from people and place, about how we can begin fixing our economy from the ground up ... starting with food.
With trillions of dollars a day accelerating around the globe, invested in securities that no one fully understands, it is time to affirm a new direction:
The Slow Money Principles
In order to enhance food security, food safety and food access; improve nutrition and health; promote cultural, ecological and economic diversity; and accelerate the transition from an economy based on extraction and consumption to an economy based on preservation and restoration, we do hereby affirm the following Slow Money Principles:
I. We must bring money back down to earth.
II. There is such a thing as money that is too fast, companies that are too big, finance that is too complex. Therefore, we must slow our money down -- not all of it, of course, but enough to matter.
III. The 20th Century was the era of Buy Low/Sell High and Wealth Now/Philanthropy Later—what one venture capitalist called “the largest legal accumulation of wealth in history.” The 21st Century will be the era of nurture capital, built around principles of carrying capacity, care of the commons, sense of place and non-violence.
IV. We must learn to invest as if food, farms and fertility mattered. We must connect investors to the places where they live, creating vital relationships and new sources of capital for small food enterprises.
V. Let us celebrate the new generation of entrepreneurs, consumers and investors who are showing the way from Making A Killing to Making a Living.
VI. Paul Newman said, “I just happen to think that in life we need to be a little like the farmer who puts back into the soil what he takes out.” Recognizing the wisdom of these words, let us begin rebuilding our economy from the ground up, asking:

On May 17, 2012 Green Mountain Organic Creamery had its grand opening and ribbon cutting ceremony. Sharing retail space with another local business, Vermont Smoke and Cure, in the former Saputo Cheese plant in Hinesburg, Vermont, these two businesses hope to employ more than 40 workers in the near future.

Organic milk sales started at 400 gallons a week when they first opened their doors. Sales have been growing each month since then and today they are selling 2000 – 2500 gallons per week. “We have doubled sales since last year at the same time,” says Cheryl with a smile. Today, 1.5 years into their new business, Green Mountain Organic Creamery has just started to break even – which is quite impressive for a new business.

Not all the milk that they produce goes to their bottled milk products; about 50% of their milk (25,000 lbs per week) goes to their creamery and the remaining 50% goes to a national milk buyer. They feel very fortunate to have this continued relationship with a wholesale market so that they receive the organic price for their surplus milk.

Some of the companies, stores and local business purchasing their milk right now include: many local food coops and retailers throughout the New England and New York, Champlain Chocolates, Red Kite Candy (caramels), Fletcher Allen Hospital, Price Chopper, Shaws, and a growing number of Vermont public schools. In order to service the elementary schools, their creamery will have to package 1% milk into 8-ounce containers. Cheryl and JD look forward to fulfilling that need soon, but that package size will take some additional capital investment on their part. The newest change that will be out by March 1st is switching to glass bottles.

There are a total of 10 people working at their organic dairy farm (Kimball Brook Farm) and at the Green Mountain Organic Creamery. In their processing plant, they employ 4 people during their production days, and may be increasing those numbers once they start packaging their milk in glass bottles. Other staff positions include bookkeeping and sales and the rest are on the farm milking/feeding the cows and growing/harvesting the crops. 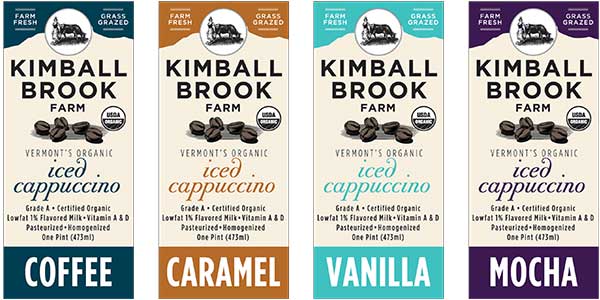 Cheryl and JD read a lot of dairy processor magazines, which helps them stay on top of trends and gives them ideas for other ventures. It is a part of the business that Cheryl finds very satisfying. To stay motivated, learn from their peers and help others, they participate in a round table of other small scale agricultural business owners including Pete’s Greens, The Royal Butcher, and Champlain Orchards. All the participants are people involved in a start-up and are trying to ramp up their business. Sharing and supporting each other gives all involved an opportunity to see how other new businesses have gained ground and handled stressful situations. 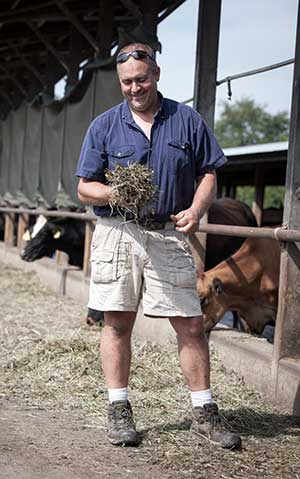 Products that they are marketing through their Kimball Brook Farm Organic Milk label include: whole milk, 2% milk, 1% milk, skim milk, cream-top whole milk, whole chocolate milk, 1% chocolate milk, heavy cream, and half & half. Once their milk products have gone to all their accounts, their creamery (Green Mountain Organic Creamery) has a small volume of skim milk remaining. The thought of raising pigs on the skim milk is enticing, but their business mentors discourage starting another enterprise so early in the game. What Cheryl and JD have decided to do is create some seasonal flavored skim milk products such as Maple Milk in the winter; Strawberry milk in the summer, etc. By the beginning of February they will be bottling all four flavors of their new Ice Cappuccino line.

In October of last year, Cheryl and JD went to a regional ‘Match-Maker’ event in VT whose purpose was to match farmers producing value-added products with buyers. At these events, the farmer has 2 minutes to sell their product and can offer samples at the time of this interaction. Being that the Green Mountain Organic Creamery was already in many of the stores, Cheryl decided to pitch their products to the public schools. Cheryl met with the local High School food program coordinator and today their Kimball Brook Farm organic milk is in 10 schools with more prospects in the wings.

Moving Forward and Making Room for the Next Generation

Now that their operation is breaking even, Cheryl is feeling less stress but says she needs another year under her belt before things will be feeling great. “Looking back over the past 4 years I am not sure that JD and I would have gone through the whole process”, she reflects. “It’s nice to be ignorant about what is going on. But we are really happy that we are at that point where we can put milk on the shelves.” The time of envisioning the business and pitching the idea to others was exciting, but their first year was ‘a year of hell’. 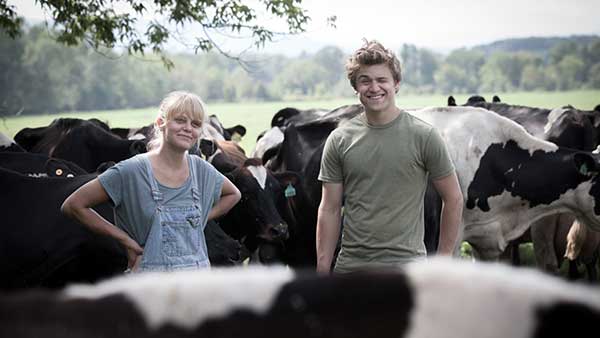 With the growth of their new venture, family members have been returning to the farm for full and part time employment. Their daughter, Hilary, works full time on the farm and Hilary’s boyfriend, Rye Mathews, works part time at the creamery. Their son, Jack, an aspiring actor, is off to college in Europe, but may find a creative way to contribute to the enterprise, and an older son, Josh, is currently overseas in the military but has a goal of returning to the farm in two and a half years. There are other relatives who have expressed an interest in living nearby and being a part of this growing enterprise – something JD and Cheryl did not expect, but welcome with open arms.