Andrew Dykstra and his family have a certified organic vegetable, seed and dairy farm located in Burlington, Washington (Skagit County). Their farm consists of about 600 acres of which 500 are tillable. In any given year, about 500 acres are used for pasture and/or silage with 30-40 acres committed to vegetable and seed production. The vegetables have been a large part of the farm for the past 20 years and seed production has been in place for the last 15 years. Due to increased regulation around human food crops (Food Safety Modernization Act), the cost of growing vegetables has increased significantly with little increase in market pay price.

Andrew finds crops that pay well, and grows them; “Whatever people want to buy, we’ll produce,” says Andrew, “We are using the same equipment, same people, same labor.” Seed crops bring a larger return these days, so they have been devoting more of their vegetable acreage into growing gold beet and red beet varieties. Another business venture that they have been working on over the past 1.5 years has been designing and selling Hydroponic Barley Fodder Systems. This added venture is bringing their youngest son, Charlie, back onto the farm, and is giving their dairy cows a highly nutritious and affordable feed for their organic dairy herd.

With the exception of the 3 years that he left the farm to work as a pipe welder in oil refineries, Andrew has been farming all his life. “Every farmer that is still in business [in his area] has gone off the farm and done something different,” says Andrew. “They eventually come back to the farm; after they saw the other side of the fence.”

Today, Andrew and his wife, Sandy, farm with their sons Chris and Charlie. They milk a closed herd of 260 Holsteins, with annual production of 15,000 lbs per cow. Milk quality and components average 191,000 SCC, 3.85% butterfat, 3.03% protein, and 5.61% other solids. Andrew and Chris run the farm with 6 additional employees, and Sandy is in charge of the bookkeeping. Charlie, who is going to school for green house management, is a partner in their Hydroponic Barley Fodder business (www.feedyourfarm.com).

Transitioning to organic production happened progressively over time. Andrew’s father, Douwe, purchased the farm in 1972 and in 1981 he started making changes that steered the farm towards organic production. The first step was replacing commercial fertilizer with compost in 1989, followed by the decision to manage all the land organically. In 1992 they stopped using antibiotics on their cows, and in 2004, being one of the first organic farms in their county to transition to organic dairy, they started shipping organic milk to Organic Valley.

Cows and heifers are housed in free stalls and calves start out in polydomes and then move to group pens. They milk their cows in a double seven herringbone milking parlor.

During the growing season, the milk cows are moved to fresh pasture at least once a day; 50% of their ration is from pasture and the remainder is hay plus about 17 pounds of barley fodder. Heifers are moved to new pasture every few weeks and their ration is 100% pasture.
For winter feed, the cows are fed alfalfa hay and silage (either haylage or baylage), alfalfa pellets, and 9 pounds of barley fodder per cow (though this has now increased to 17 lbs of fodder per cow). During the winter of 2011, the cows were fed 15 pounds of grain per day; today they are not getting any grain. Older heifers receive baylage only, the small heifers get a little grain with their forages, and the calves get whole milk and hay, plus some Redmond Salt, free choice.

The Dykstras use bulls for breeding, and calve year round. They purchase their bulls from good producing Holstein herds and usually keep 4 bulls in with their milking herd at any one time. “Some bulls stay on for 4 days, others stay on for 4 years,” says Andrew. If a bull acts up, he is gone; “they don’t get a second chance.” The cows are milked at 1 pm and 3 am, so the cows are moved back and forth from pasture using a quad (or ATV). Andrew preg-checks all their cows at dry off and they have a 95% conception rate.

Herd longevity is 4-5 lactations, and the Dyksrtas keep all their replacements. This past fall they culled all the cows that they thought would not make it through the winter for one reason or another. With the price of beef being so high, Andrew figured he could make $1,000 on each cow and bring in some nice young milkers to the milking string.

Though the Dykstras have been organic for 9 years, they have been farming without antibiotics for 22 years. They like to make sure their animals have a balanced diet to negate complications, even if it costs a few more dollars up front. The veterinarian is used mostly for vaccinations and the occasional emergency, and they work with AgriKing for their ration balancing. They vaccinate at birth and at 6 -9 months, and there is very little that they have to do for health treatments.When they do treat an animal, they do not turn to a medicine cabinet full of options.: They have success treating sick cows and calves with Vitamin C, Dextrose, and saline.

They also use DHIA to monitor their cows’ production, milk quality and stage of lactation. When it is time to dry a cow off, they will preg-check her, keep her in a holding pen with no hay or water for 6-7 hours, then they will offer water but no feed for the rest of the day. The cow is then moved to the dry cow pen and started on a dry cow ration that includes a dry cow mineral mix.

Calves live in the polydomes for at least six weeks, then moved to group pens where they still get milk and start on hay. Calf farming works very well for the Dykstras. Calves do not receive any grain until approximately 6 months of age when they move to rented farms. 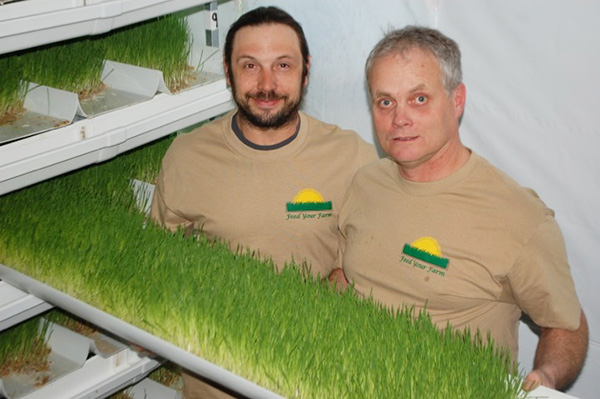 Economics prompted Andrew to look into feeds that could replace some or all of the concentrates that he was feeding his cows. “If corn prices dropped to $350/ton we would be at a break-even prices,” says Andrew. In the 1970’s grain (per ton) was 33% of the value of milk (per ton). In 2012, the cost of grain was 131% of what he was getting paid for his milk. This scenario is not sustainable.

In October, 2011 Andrew heard John Stoltzfus (NODPA Rep and organic dairy producer from Whitesville, New York) talking about his Barley Fodder system. Andrew was intrigued and went home and decided to set up a system in one of his greenhouses - but that was a disaster. “We could not keep the temperature steady; [it was] too warm in the sun and frozen at night, and we could not control the humidity,” explains Andrew. They tried larger heaters, but the energy costs were too high.

Though it failed in the greenhouse, Andrew knew that he still wanted to find a way to make it work on his farm. With the help from his son Charlie and their friend Matt Sampson, who has over10 years of Hydroponic experience, they developed a hydroponic barley fodder system using plastic trays and racks. The fodder system is kept in an insulated room, and they try to keep temperatures between 65-75 degrees depending upon air exchanged and humidity. Andrew hopes to grow the same amount of fodder for his cows year round.

When they first got started, they were growing 250# of Barley fodder per day, but that quickly climbed to 1000 lbs, then 2000 lbs, and today they are producing the maximum amount that they can; 4000 pounds per day (or 17 lbs of fodder per cow). The ratio of barley seed to fodder produced is 1:7. As the volume of Barley fodder increased, the15 lbs of grain fed per cow gradually decreased to zero.

As a result of eliminating grain from the ration, production has gone down a little bit (Andrew had diminished the quality of his forages), but butterfat and protein has increased, and the economics of the farm has turned around dramatically. Instead of spending $40,000 per month on grain, they are now spending $14,500 per month on: barley seed ($4500), added labor ($5000) and water, utilities and equipment ($5000). That is a 64% reduction in concentrate costs, or a monthly savings of $25,500! “I would like to increase the fodder fed to 20 lbs per cow, but we would need to expand our Barley Fodder room if we did that,” explains Andrew. “It will be a goal for 2013-2014 to go back to [growing] higher quality forages.” The size of their current barley fodder room is 39 feet X 39 feet, and it produces up to 4000 pounds of fodder per day. The cost to build a fodder system of this size would be around $57,000.

The goal for a good fodder system is to ‘quick sprout’ the Barley to 8 inches tall in 7 days with a good root mass. Sprouting converts the starches to sugar, increases vitamin content, and makes protein and nutrients available. They have tried sprouting other grains, and have found that Spring Barley is the preferred barley to grow. Fall barley is too slow, oats don’t work, corn seed costs too much – though it would work, and with wheat, some of it is okay. Andrew and his Feed Your Farm fodder system partners are working with Washington State University in analyzing the barley fodder for nutrient value. The spring barley is the same variety of seed that the new malting company likes to use, which works for Andrew, as this means that there are growers growing the barley that they need.

So, when cows are eating barley fodder and they are not fed any concentrates in their ration, can milk from this farm be considered Grass-Fed Milk? Andrew thinks that this could be possible, but also feels there needs to be some standards in place and questions answered such as: Should the seed used for fodder systems be organic? (Andrew feels they should be); What would be the minimum % sprouting per batch to determine if the cow is consuming a forage versus a grain?; What would be the minimum germ?; What is the minimum amount of days a seed would be sprouting?, etc. 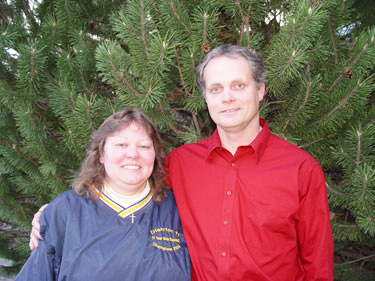 Organic Dairies Need to be Profitable

“Currently milk is at $580 per ton ($29 cwt) [in the West Coast] and corn is at $700-$750 per ton. This is why we stuck our neck out and started our Feed Your Farm barley fodder business,” says Andrew. As the newly elected President for the Western Organic Dairy Producers Alliance (WODPA), Andrew feels that the number one issue that West Coast producers need to address is farm profitability. “2% milk at the retail store sells for $88 per cwt.” Andrew feels that organic milk is becoming a commodity and this needs to be turned around. It is important to make sure that organic dairy is a thriving, and profitable vocation for producers today and into the future, and as WODPA President and a partner in his new fodder business, he hopes that he can help make positive changes for organic dairy farmers nationwide.

Andrew will be a speaker at this year’s NODPA Field Days, taking place September 26 & 27, 2013 in Mansfield, PA. To learn more about his Barley Fodder Feeding system, please go to www.feedyourfarm.com. You can reach Andrew at: phone: 360-661-4302, email: asdykstra@aol.com. To learn more about the Western Organic Dairy Producers Alliance, go to www.wodpa.com.