John and Cindy-Lou Amey operate Indian Stream Farm located in an historic settlement in Northwestern New Hampshire - once known as The Republic of Indian Stream. Their farm is named after the historic tributary and independent nation that once existed there. The Treaty of Paris (1793), which ended the American Revolution, defined the U.S. Boundaries as the “Northwestern most head of the Connecticut River”. With 3 streams flowing into the river, there were conflicts with boundaries between the United States and Canada that lasted for 60 years. For a short while (from 1832 to 1835), the area was declared a sovereign nation and ran as a Republic with its own currency, stamps and standing militia. But in 1835 the Republic of Indian Stream voted to join New Hampshire and became a part of the United States.
John has strong ties with the area through his heritage and love for the land. One of his descendants, John C. Haynes, was instrumental in the settlement of the area in the late 1700’s and in the creation of the Republic of Indian Stream.

Indian Stream Farm has been in the Amey family for over 100 years. John has had Cindy-Lou by his side for the past 10 years. “We have mutual farming backgrounds and work well together”, says Cindy-Lou. Though she brings in off-farm income from teaching, Cindy-Lou also takes care of the farm recordkeeping and certification paperwork, fills in for absent workers, cares for the chickens, pigs, sheep, horse and contributes to evening chores a few times a week. In the springtime the Ameys host visits from school groups and Cindy-Lou helps to organize these day-long activities.

The farm today consists of 1,550 acres of which 300 acres are tillable, and 150 acres are used for pasture. Though the dairy farm is the largest income generator, the Ameys have a diversified farm bringing in revenue from their timber stand (hard and soft wood lumber, firewood and pulp wood). They also produce about 30-40 gallons of maple syrup and manage a small herd of beef and a flock of sheep for a small local market. John loves to work in the woods; he envisions making a living from his woodland someday, and finding someone else who could be in charge of managing the dairy.

John and Cindy-Lou farm with John’s brother, Mark, who works there part time, along with two college kids who are also part-time. They milk 50 cows, in a tie-stall barn with a pipeline milking system. Average production per cow is about 13,000 and their milk quality and components tend to run around185,000 SCC, 3.76% Butterfat, 3.1% Protein and 5.51% Other Solids. John has been farming there for 49 years, and Cindy-Lou spent most of her childhood on her grandparent’s farm in Canada. Her father’s dairy farm is just 2 hours North of Pittsburg, in Ste. Victor de Beauce, PQ Canada. “I had been teaching in Foreign Language here in Pittsburg” explains Cindy-Lou. She even jokes that she came with a dowry when she married John, “a white-faced Hereford with calf, a goat, a Morgan mare, 60 acres with a small barn, and 4 children.”

The roller coaster ride of the conventional market was not an enjoyable one and John and Cindy-Lou were ready to try something different. They had been noticing that organic producers seemed more enthusiastic about their chosen career than conventional producers and decided to take a serious look at transitioning to organic. They initially started talking to Organic Valley about picking up their milk but their farm was too far north for the current OV truck route. They soon had an opportunity to ship to HP Hood, and once they had their contract they completed the final stages of their transition.

Making the switch only took them a year, as their land was already certifiable, and their livestock management practices were very much in accord with the organic production standards. They started their transition just after the 80:20 rule went away, which was one of the most financially challenging years they had ever experienced. Their farm is certified by the NH Dept of Agriculture, Markets & Food.

Everything was going fine until the day that Hood decided to leave the fluid milk market. Hood producers in VT, NH, NY and Maine were scrambling for someone else to take their milk. Thanks to the valiant effort of Organic Valley, many producers were picked up - including the Ameys. Over this transition time, Organic Valley made sure that the new producers felt welcome. They organized regular conference calls, helping them get fully on board and integrated into the Organic Valley community of producers. “John participated in almost every single [call], and that’s when he began to truly understand the difference in the ‘OV experience’ from what he’d known up until this point in his farming career”, explains Cindy-Lou.

The milking herd is moved every 24 hours to a new pasture, except in times of extreme weather when they may need some shade. Heifers and calves are grazed in larger paddocks and are moved less frequently, making sure that they have access to adequate shade, water and feed. “All pastures are improved by pasture mowing, chain harrowing, and the fertility is addressed through the application of manure and wood ash, as indicated through soil testing”, explains John.

About 64% of the total dry matter intake comes from pasture for the milking cows. To supplement the pasture, they feed an average of 10# of a 10% concentrate and offer a small amount of dry hay during the evening milking. Heifers, calves and dry cows are fed hay, baleage and a very small amount of grain. Salt and minerals are offered to all animals and they are looking into the prospect of adding kelp.

Since transitioning to organic, the Ameys have found that milk production has gone down a little as a result of feeding a high forage diet. The decrease in production is easily outweighed by the fact that the animals are healthier, herd longevity has increased, and there is a significant reduction in veterinary bills.

Reproductive issues and cases of mastitis have also decreased significantly. They have had great success in reducing cases of milk fever and retained placentas by making sure to supplement their dry cows with dry cow minerals. Products that they commonly turn to on the farm for the occasional mastitis or milk fever include organic garlic, topical udder ointments, aspirin, calcium electrolytes, and CMPK boluses.

Calves are raised indoors and are fed milk for 3-4 months along with free choice hay and the eventual introduction to grain. Calves are started on the Triangle-9 vaccination program at the age of 6 months. For the occasional case of calf scours, their calves are given electrolytes, and a red-clay based powder, added to the milk. 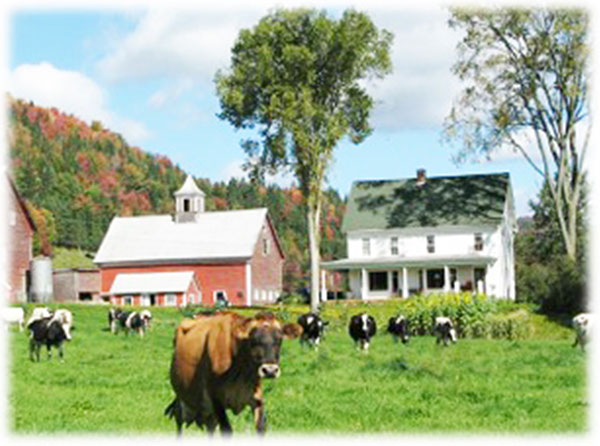 The major dairy breed on Indian Stream Farm is Holsteins, but they also have Holstein/Milking Shorthorn and Holstein/Jersey crosses. They breed almost exclusively using AI, focusing on ease of calving, legs and feet. If every cow was bred to dairy genetics, the Ameys might have some surplus dairy replacements to sell, but John and Cindy-Lou have a different approach. They breed some of their lower class cows to a beef bull and raise those calves for their small retail beef market. They have about 30 dairy cross beef and purebred beef animals of all ages most of the time, selling about 10 animals each year.

Looking to the Future

Though dairy is the primary income-stream from the farm, the Ameys bring in revenue from the sale of timber, beef, sheep, a little maple syrup, and Cindy-Lou’s off-farm teaching income. The sheep enterprise is there partly because “no one has ever not had sheep on our farm”, says John.

The side enterprises are small, but the timber enterprise has room for growth. John loves working in the woods and he and Cindy-Lou are starting to look at ways in which they could continue dairy farming without being the primary laborers. For example, Cindy-Lou dreams of one day putting together a “Children’s Introduction to Farming” program that they could offer on their farm. They don’t want to sell the farm, but finding a young aspiring farmer looking to build some equity or to gain some experience might be the perfect fit for their operation
John and Cindy-Lou attended their first NODPA Field Days in 2005, when it convened at the University of New Hampshire. They have been members and supporters of NODPA since that time and Cindy-Lou recently agreed to become a NODPA Representative. When looking at the organic dairy industry as a whole, they note that issues that concern individual regions within the U.S. are not addressed by the ‘one size fits all’ regulations being promoted at the federal level. They often turn to NOFA Vermont if they have questions and are very grateful for all the support that they have provided them over the years. They are happier now with farming than they have ever been; the organic pay price has allowed the Ameys to hold at a herd size that suits them. They can’t compete with the speed of their neighbors, nor do they have to. “I am a 3-tractor farm with a 2-horse attitude”, says John with a grin.