Organic farming on Martha’s Vineyard: You better believe it!

Added November 13, 2011. Located on Martha's Vineyard, Grey Barn and Farm, owned by Eric and Molly Glasgow, is planted right in the center of the island and consists of 68 acres. Included in this acreage, there are 45 acres of pasture, 13 acres of forested land, and the remaining acreage holds a small orchard plus the house and barns.

Martha's Vineyard has a strong agricultural history; the Grey Barn and Farm was one of a few dairy farms that was in full operation until 1961. Today agriculture is still surprisingly strong with a healthy selection of orchards, vegetable farms, fiber farms, and diversified enterprises. Eric and Molly are fulfilling some of these market demands by producing grass fed meat (veal, pork, beef, poultry), eggs, and a number of dairy products from their creamery including raw milk, pasteurized milk, cream, and (coming soon!) yogurt and cheese.

With no previous experience in dairy farming, Eric and Molly Glasgow jumped in with both feet and purchased their farm in 2009. They immediately started their organic transition and are currently on their final year of the 3-year process to becoming certified organic, using Bay State Organic as their certifier. The couple has two boys; Noah and Jakie ages 8 and 6. Eric manages the farm with the help of a full time herdswoman (Rebecca Brown) and two farmhands, and Molly runs the creamery with the help of one assistant.

Living on an island makes it a little complicated and, perhaps, ridiculous to think that one could produce and sell milk to a wholesale market, but there is a strong interest in local food products and dairy is one item that is in high demand. The Grey Barn and Farm began with the intent of feeding a niche market - namely, the year-round residents, seasonal residents, and summer tourists. Their products are retailed from the farm and through a few of the local stores and restaurants. Though they have to travel off the island to slaughter their four-legged animals, this is the only job that does not take place on the farm. They have a small creamery on the farm allowing them to process their milk into bottled milk (raw& pasteurized), cream, cheese, yogurt and also have a retail store where visitors can come and purchase their meat, dairy and eggs.

Eric and Molly were interested in the lifestyle that went with operating a diversified farm and microdairy; they also felt that this would be a great environment in which to raise their young boys. To make this successful they developed a model that would draw their customers to the farm where they could find an array of livestock products produced and sold on the farm. They thought carefully about what they would need to charge for their products based upon their expenses with a reasonable return on investment while also maintaining a competitive or comparable price to other organic milk brands in the dairy case. The raw milk that they produce is sold at the farm for $3/quart (or $139/cwt). When they sell milk to their creamery (which then makes their cheese, yogurt and pasteurized milk products), they charge a wholesale fee of $1.75/quart (or $80/cwt). Other items that they currently market both on and off the farm include: pork, veal, eggs, and pasteurized milk products in quart sized jars (whole, skim, cream). They may go into beef at some point, and will be introducing yogurt and a few cheeses to their dairy product line very soon. 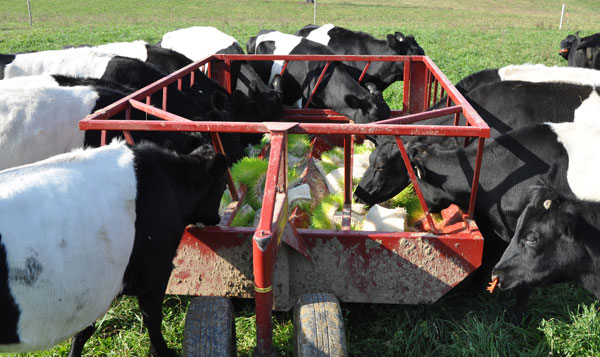 Eric and Molly decided on the Dutch Belted dairy breed, partly for their dual-purpose quality, partly for their 'oreo cow' attractiveness, and most importantly because they wanted a dairy cow that could maintain condition on a grain-free diet. They also decided to have a spring seasonal herd as the bulk of their business takes place during the growing season, and they wanted to make sure that they could take some time off from milking each year. Currently there are 19 milkers; the cows start to freshen April 1st and they will be drying off their cows by the end of the year. Ultimately, they hope to be milking 25-30 cows next year to meet the needs of their growing milk market, and plan to switch to milking twice a day to increase production and to improve herd health.

Cows are milked in a small double two parallel parlor. The cows are out on pasture at all times but they do have a 2500 sq foot winter loafing barn that they use once the grazing season is over. With two thirds of the milking herd being first calf heifers, milking once a day, the cows are averaging 25#/cow. By next year, with a more mature herd, Eric anticipates the production will average closer to 32 #/cow.

All the cows, steers and yearling heifers are raised in one group and are fed pasture, about 5# sprouted barley, and a small amount of dry hay. They also offer their animals a free choice mineral bar supplement along with Graziers Essential (Agri-Dynamics) mineral mix, kelp, and salt.

Bull calves were fed this year with a nurse cow system (5 calves on 2 cows) until they were slaughtered for veal. Since the calves are not fed any grain, they feel it is important to have them on a generous volume of milk for a minimum of 5 months. Heifer calves are raised in groups of 6 and fed 2 gallons of milk a day using a bar feeder. They are introduced to hay from day one and are put on tall pasture.

Cows are pastured day and night moving once or twice a day, depending on the conditions. It is estimated that 90% of the DM intake is from pasture, and the balance comes the sprouted barley and some dry hay if the pasture is really rich. In the winter, after dry off, the cows are fed dry hay.

The goal at the Grey Barn and Farm is to maximize the use of pasture. All 45 acres are used for grazing and growing some crops for season extension. A small amount of acreage is planted to summer annuals, turnips, and forage brassicas, assuring there is ample pasture in years of drought and providing additional energy to the diet as the grazing season starts to wind down. All of their winter forages, fed December – April, are purchased.

So what will they do with the surplus pasture that one typically encounters in the spring and early summer? Nothing is set in stone yet, but realizing that turning grass into milk is more profitable than turning it into hay, they are considering a couple different scenarios that will allow them to produce more milk with the surplus forage that they have at the beginning of the growing season. Over time, Eric and Molly would like to lease some more land so that they have the capacity to grow their farm and stay on top of the growing customer demand. 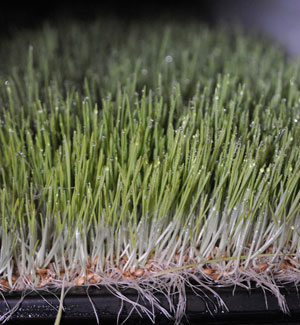 Eric became interested in sprouted barley because of its high digestibility, providing more mileage for their cows (less wasted/passes through).

Eric became interested in sprouted barley because of its high digestibility, providing more mileage for their cows (less wasted/passes through). Also, since they do not feed grain to their cows, they wanted to find a high energy source of nutrition that would complement the pasture. Eric and Molly purchased their sprouted barley feeder through Fodder Solutions and have been very happy with it. The FodderSolutions system has been designed specifically for growing sprouts hydroponically. The semi-automated sprouting machine is temperature controlled with a pump that moves water around, creating a perfect environment for the sprouts to grow.

Making sprouted barley takes 7 days from start to finish, and their barley sprouting machine has the capacity to produce 63 trays a day. Right now they are only producing 45 trays a day, as they want to be able to increase the production (without reducing the amount fed per animal) as the herd size grows. Each tray is 12 inches x 50 inches and is called a 'biscuit'. Two to five biscuits are fed to the pigs, a couple are fed to the chickens, one-two biscuits to the calves, and the balance is fed to the milkers, steers, and yearling heifers in a mobile hay feeder. From the cost of the barley seed to the time loading and unloading seed and sprouted grain, plus the 4 year payback on machinery, Eric estimates that the sprouted barley costs about $1.25/biscuit or about $2/cow/day. which he feels is a reasonable cost for high quality feed.

Part of having a good system in place is also having the right team of people. Eric and Molly hired Rebecca Brown in January of this year to be their herdswoman. Becky is a recent student/employee of Gary Zimmer (Midwestern Bio Ag) and comes with a deep understanding of soil health and its relationship to livestock health and growing quality feed. 'Nutrition is our primary target to get the immune system up and functioning so that the cows are firing on all 8 cylinders', says Rebecca.

To make sure that they are producing the highest quality forage for their animals, Becky has created a land management program that includes the following:

For dry cows, they give a MuSe injection (sub-Q) 2-3 weeks prior to calving to reduce SCC and to prevent retained placentas. At freshening cows are given clean warm water with homeopathic Pulsatilla, Arnica and Rescue Remedy. For retained placentas, they use homeopathic Caulophylum. Other supplements that they turn to shortly after calving include aloe, garlic, Dr Paul's Comfort Boluses, calcium supplements, and molasses. Newborn calves get Impro's 2nd Formula and Gener-Cap boluses, plus MuSe sub-Q.

If a cow has a high SCC or comes down with mastitis, they have a list of options to turn to, as a multi-pronged approach. Treatment options include probiotics, Echinacea tincture (herbal product), aloe vera drench, apple cider vinegar, Biocel CBT (Agri-Dynamics), Impro Dairy Formula, Hyper Immune Whey, or Dr. Karreman's PhytoMast. They have also tried putting Mastoblast (homeopathic product by Homeopet)) in the water tank, and have used a custom homeopathic nosode from Dr. Ed Sheaffer at Clark Veterinary Clinic. They also have mastocream (Homeopet) and peppermint oil on hand for hard quarters.

The Grey Barn and Farm is nearing the end of their first very successful year marketing raw and pasteurized milk, poultry, eggs, pork and veal. In July and August they could not keep their fridge stocked with milk products and now that the seasonal population has flown south for the winter Molly is busy putting the extra milk into cheese making. Hopefully next year will be as successful as this year and who knows – maybe they might even have some tasty cheese for you to try!