Added May 15, 2011. Randolph Center is in just about the geographical center of Vermont, where the Green Mountains dictate the agricultural landscape. The rolling hills have always been perfect for grazing livestock and the small-scale family farms that dotted this region were the traditional Vermont dairy farms the state's agricultural economy was once built on. Today, many of the remaining farms in the area are certified organic.

Traveling over dirt roads towards the end of April's mud season, there are still plenty of snow patches up on this ridge where Pineville Farm sits. Here the Conant family takes great pride in their herd of registered Ayrshire and Jersey cows, whose milk is shipped to Horizon Organic.

Dean and Terri Conant are the third generation on the farm that Dean's grandfather purchased in 1936. At the time, 12 cows were milked in a barn where today's heifer shed stands. Dean's father, Gordie, built a new milking barn across the road in 1962, which housed 60 milking cows. Terri also has dairy farming in her background, as her grandparents had a dairy farm in nearby Stockbridge, Vermont. The couple married in 1983 and moved on the family farm in 1988 where they raised three children.

Today, three generations are involved with the day-to-day operations of the farm. Dean and Terri are now the primary managers, but Gordie is still involved, taking care of the hay mowing and the heifer chores. Daughter Kristi does the night milking and calf chores. She recently purchased her great-grandfather's old farmhouse, and living on the farm has increased her involvement. The Conant's other daughter Kayla helps out as a relief milker, while their son John is currently off the farm studying criminal justice in Rutland, Vermont.

Dean and Terri's three year old granddaughter Leah makes up the start of the fifth generation and spends quite a bit of time on the farm. In September 2010, she showed her favorite calf 'Quiet' at the Tunbridge World's Fair in the 'peewee' division. Dean and Terri have both been extensively involved with 4H for many years, so Leah is definitely making her grandparents proud.

Overview of the farm

Pineville Farm is 225 acres, with additional rented land totaling 125 acres. Approximately 75 acres of the farm are permanent pasture, with an additional 60 acres of hay fields incorporated over the grazing season.

The Conants milk between 60-65 cows year round. Their herd of 140 head is primarily registered Ayrshires with about 20 registered Jerseys. Production runs about 15,000 pounds per cow for the year, or about 50 pounds per cow per day. Quality milk production is a primary focus for the Conants, with somatic cell count averaging about 120,000 over the year. Dean says that Horizon has three tiers for quality and he's always aiming to be in the top tier, providing an added premium of $3/cwt above his base price.

The Transition to Organic

The Conants have been certified organic by Vermont Organic Farmers for almost four years now, becoming certified on June 8, 2007. In fact, Dean was the very last farmer to sign up to transition under the old 80:20 feed rule (80% organic feed for the first 9 months, 100% organic feed for the last three months), submitting his intent to transition paperwork at the end of the day on June 8, 2006. It wasn't a spur of the minute decision though. Dean put a lot of thought into transitioning the farm and went back and forth on whether he should take the leap. He says, "With traditional dairying it was the up and down big swings that got me interested in organic. I liked the idea of a guaranteed price." When he started talking with the milk buyers and NOFA-VT, he found that the regulations were not that far off from his current management. "It was doable," he says. As far as waiting until the last minute to sign up Dean says, "I knew it was then or never. I wouldn't be able to do it with the 100% rule."

The Vermont Organic Farmers certification program saw 80 farms sign up to transition to organic between January 1st and June 8th of 2006. It was the last opportunity to transition dairy animals to organic using the 80:20 feed rule, which was a much more affordable transition process. After June 8th, and as it stands today, a dairy farm must feed 100% organic feed for the entire 12 month period.

For Dean and Terri, managing their land organically was not going to be a problem. Most of their land already qualified for certification, with the exception of one field that had been planted with treated seed and had until the 2008 harvest year to finish its transition. That was one hurdle in the beginning – they had to sell the feed from their best land for two years and buy in some organic forages. This also added an extra layer of record keeping with maintaining harvest records for transitional and organic crops plus keeping sales records for transitional feed and purchase receipts for organic feed.

Grazing had always been a part of the farm's management. Dean's grandfather pastured his cows in day and night pastures. Dean practiced rotational grazing, but says that since he's become organic his pasture management has gotten more intensive.

Dean no longer grows corn. All his forage is made as balage, and he uses an in-line wrapper. Bales typically weigh between 1,600 and 2,000 pounds (55% moisture content). For his winter ration, a vertical mixer is used to feed a TMR of 78# balage and 13# grain per cow. He then top-dresses with up to 8 pounds of grain per cow.

The cows are fed organic grain from Morrison's Custom Feeds in Barnet. An 11% protein grain is fed year round. Dean's feed quality is very high, testing between 16-18% and this allows him to feed a lower protein grain during the non-grazing season. Last year, Dean also grew 20 acres of BMR sorghum, which was also harvested as balage. He was pleased with the quality and also the tonnage that was harvested.

The grazing season in this part of Vermont is typically May 15th to October 15th. "You can count on it," says Dean. "There's very little variation." The farm's topography means that cows must walk up and down hills on their daily trip to and from the barn. The first week out on pasture takes some adjusting to the terrain.

Grazing management varies depending on the grass growth. In May, for example, when re-growth rates are high, cows may re-graze a paddock after 7-8 days. By June, this increases to 20 days and in July paddocks rest 40 days before cows return to them. In the fall, this can tighten up again depending on rainfall amounts. For water, Dean uses a ¾" pipe on top of the ground with t-fittings and shut off valves. He then just has to move tubs around to have water in each paddock. Water is pumped from an adjacent brook and there is enough pressure to get to all paddocks but a few. For those remaining paddocks, Dean can pipe water from the barn.

In previous years, during the grazing season, the cows had typically been fed a TMR at night in the barn. Dean had practiced 'days only' grazing, and his herd's dry matter intake from pasture averaged about 40%. (VOF has been asking farms to calculate DMI from pasture since 2007).
The question of 'days only' or 'nights only' grazing is one that many farmers have been asking. Can a farmer practice 'days only' or 'nights only' grazing, confining cows for a period of the day if their dry matter intake is well above 30%? The pasture rule does say 'Animals must not be prevented, withheld, restrained or otherwise restricted from actively obtaining feed grazed from pasture during the grazing season'. However, a farmer could keep their herd in days or nights if it can be justified by one of the exemptions outlined in Section 205.239 (b) and (c). Some examples would be weather conditions that could cause the animal physical harm (like heatstroke), or to preserve soil and water quality. A producer may choose to reduce dry matter intake from pasture, and feed more stored feeds during a slow growth period during the summer in order to prevent overgrazing and erosion and to stockpile more pasture for fall. Farmers will be asked to keep track of how the ration changes over the grazing season, so that it can be verified that the 30% DMI average was achieved.

Part of the reason for 'days only' grazing at Pineville Farm was a labor issue. Keeping the cows in at night meant an easier start in the morning when Dean milked alone. Now with his daughter on the farm, he'll be able to get the cows tied in the barn much more quickly and easily. With the new pasture rule, Dean is considering changes to his pasture management that will allow him to graze both days and nights. Rather than the TMR, grain and some supplemental hay will be fed in the barn. This may boost his DMI to 50-60%, giving him some flexibility later in the summer when re-growth slows down.

Hearing from many farmers in Vermont, one of the biggest challenges with the pasture rule will be meeting the 30% DMI for the young heifer group. For Dean, this is his 6-10 months old group. This year he plans to give them access to a 20 acre pasture and limit feeding in the bunk to maximize feed intake from pasture. He'll confine them to the heifer shed and barnyard when severe conditions such as thunderstorms are on the horizon. This would minimize the amount of heifer chasing and fence fixing that would have to be done. \

Dean did have some technical support from NRCS to figure out layout of lanes, improvements with fabric and gravel to address muddy areas, and fencing options to replace the electrified barbed wire fencing that is used on some pasture land, however he provided the funding for all improvements. 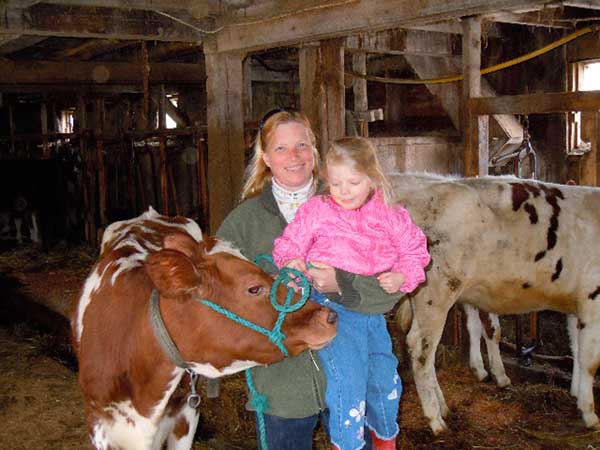 Terri, Leah, and their heifer Quiet

When considering transitioning, Dean says, "My primary concern was herd health." As far as preventive management, animals are vaccinated every August with Cattlemaster 405 (shipping fever/lepto combination) and in the spring with rabies and lepto along with TB testing. Go-to remedies include Dynamint, aspirin, vitamin C, and garlic. Aspirin is administered three times daily when needed. "If you can get the inflammation down, the cow has a better chance of dealing," he says. With garlic, Dean fills a balling gun with garlic cloves, which he says is easier to get down the cow than an unpalatable tincture.

The farm's culling rate is the same as it was before becoming organic, but now they cull for different reasons. Dean says more cows leave the herd for mastitis problems, but getting rid of high cell cows improves milk quality in the long term. However, he says "Coliform mastitis is what everyone dreads." One or two cows a year are culled because of it. Dean attributes this to the lack of availability of good, dry sawdust.

Calves start out in individual pens at one end of the tie-stall barn and then move into stalls. Calves are fed 2 gallons of milk per day and are weaned between 6 and 8 weeks. This year, Kristi has been using Impro's Opti-Start mixed with the calves' milk, which has eliminated any issues with scours. Cow grain is offered from day one and hay is introduced at one month of age. At 5-6 months old, calves move over to the heifer shed where they have outdoor access.
Dean and Terri always seem willing to adapt and make changes to their management as the organic program evolves. Dean says, "We have to keep the public's confidence." Overall, the family is very happy as organic dairy farmers. "I have no regrets and I wouldn't go back," he says. Organic production has been a great fit for this farm.