On May 15th, the USDA announced that it was terminating the “rulemaking proceeding that proposed to establish a national research and promotion program for certified organic products under authority of the Commodity Promotion, Research and Information Act of 1996 (1996 Act).” The Organic Trade Association proposal for an organic check off was denied by the USDA because there was “uncertain industry support for and outstanding substantive issues with the proposed program.” In plain English, the USDA agreed with the 1,895 organic producers, businesses and consumers that signed a petition against the organic checkoff, created by the No Organic Checkoff Coalition, representing 31 organizations and more than 6,000 organic farmers from the Western, Midwestern, and Eastern United States, and the comments that unequivocally said the checkoff would never work. For once, the process worked and a grassroots movement of producers made their voice heard over a barrage of promotion of the proposal financed by hundreds of thousands of industry dollars.

When and where did this misplaced and inappropriate idea start?

The Organic Trade Association (OTA) first floated the idea of an organic checkoff with proposed language to Senator Leahy office in 2002. Leaders of the organic community worked with the Missouri Rural Crisis Center who had been, and are still, fighting conventional beef and pork checkoffs to highlight all the problems with the proposal. Senator Leahy’s office failed to take it up.

In its next iteration in 2011, the OTA also tried and failed to attract the support of key senators who they were hoping would champion their plan. Once producer groups were alerted to the back door approaches they were quickly able to educate senate aides as to the opposition of producers.
At that time, the OTA invested $50,000 on a feasibility study in Phase 1 of their plan for an Organic Check Off as part of a Federal Research and Promotion Program (FRPP). For their feasibility study, they used the leading lobbyists in Washington, the Podesta Group, which concentrated on congressional support rather than look at the support of the organic community. In fact, they refused to accept any comments from outside groups like NODPA or have an open process similar to the National Organic Action Plan which had been recently completed.

In January 2012, after approval from their Board, OTA launched Phase 2 of their plan. Phase
2 included plans to hold town hall meetings across the country to help educate the organic community about their proposal and to gain reaction from stakeholders within the community before reaching any final decisions on next steps. Before even hearing any feedback from the organic community, in March 2012, the OTA took the next step by using the Podesta Group to privately lobby Senators in Congress to sponsor legislation that would provide a technical correction to past regulation and also allow for the formation of an organic check-off program. NODPA and other groups mobilized to inform key senators that OTA was not representing the wishes of organic farmers and that while producers supported producers being exempt from the conventional check-off they did not support an organic check-off.

In April 2012, an amendment proposing an organic check-off program was introduced to the Senate version of the 2012 Farm Bill. On April 26, 2012, the senate agriculture committee released their Farm Bill that required the Secretary of Agriculture to conduct a feasibility study on an organic industry check-off program that would mandate industry fees to fund marketing, promotion and research projects aimed at boosting the value of the sector. This rapid movement from investigation to legislation was a surprise to most of the organic community, especially as the OTA-proposed program lacked any detail about who will be assessed and how the monies would be spent.

In the face of OTA’s continued lobbying of the Congress to include their own legislative language, the Organic Farmers’ Agency for Relationship Marketing (OFARM Inc.) and the Federation Of Organic Dairy Farmers (FOOD Farmers) submitted a letter to the leadership of the House on Monday, July 9 2012, that explained the position of organic farmers, producers, ranchers, growers and consumer groups.

The OTA Board’s decision to appeal directly to Congress for language to be inserted into what eventually became the 2014 Farm Bill, to establish organic certification (a process based verification of production systems) as a commodity enabled them to apply to USDA for a multi-commodity organic checkoff. The OTA’s lobbyist convinced a divided Congress to vote unanimously to support their proposals and badly misrepresented the views of the whole organic community. Retroactively, as an after-thought, OTA and its member-only GRO Organic Core Committee began preliminary discussions with the organic sector participants to determine the need for an organic promotion and research order. Based on NODPA and OFARM member participation and attendance at the majority of OTA town halls and webinars, we were able to personally attest that there was significant farmer opposition to the OTA’s and GRO Organic Committee’s proposal, yet this opposition was not accurately recorded in the meeting notes. One of those town hall meetings was held at a NODPA Annual meeting and Field Days in September, 2012, at which they found producers overwhelmingly, did not want an organic checkoff. The OTA minutes from this meeting were not published until public pressure was brought to bear on OTA’s Board to publish them, along with minutes from other meetings where there was no support for the organic checkoff. There was a similar situation with the OFARM meeting with OTA representatives.

On May 5, 2015 the Organic Trade Association published their 50-page application to establish their Generic Research and Promotion Order for Organic. This proposal was written by a committee established by the trade organization with little input from producers on the final document. With their proposal, they also submitted a $250,000 bond to pay for the expense of the proposed regulation.

On May 3, 2016, OTA submitted a revised proposal detailing changes made to their previous proposal for regulation. And, on June 7, 2016, the No Organic Checkoff Coalition, representing 750 signatories opposed to an organic checkoff, including 25 organic farmer organizations and businesses, responded to that recently revised OTA proposal. The final paragraph of their response sums up the views of those against the checkoff: “A mandatory federal organic checkoff is not the right fit for the organic community. We urge you to outrightly reject OTA’s proposal and encourage the organic community to explore other options.”

A proposed rule was published in the Federal Register on Jan. 18, 2017, with a 60-day comment period that ended March 20, 2017. On February 27, 2017, after numerous requests from producer groups the comment period was extended until April 19, 2017. In response to the rule, USDA received and reviewed more than 14,700 comments filed by producers and other stakeholders.

On May 11, 2018, just over a year after the close of the comment period, the USDA terminated the Organic Checkoff Proposal:

“USDA based the termination on lack of consensus within the industry in support for the proposed program and divergent views on how to resolve issues in implementing the proposed program. Some of the concerns USDA took into consideration were the impact of de minimis level exemptions and high-value commodities on the program, how organic promotion would affect other agricultural commodities, the voting methodology that would be used, the financial burden on small entities and the challenges of tracing imported organic products. Additional concerns were the method of assessment for imports, the assessment of non-food products and products “made with (specified ingredients)” and the paperwork burden on covered entities.”

From the beginning of this process, we attempted to work with the OTA to look at the need to increase the level of support for organic research and to promote the integrity of the label but they preferred the advice and counsel of Washington-based lobbyists and an opaque process to an open dialogue with committed organic farmers. Working with other producer groups, non-profits and independent businesses, the No Organic Checkoff Coalition staunchly defended the basic right of all farmers to make a decision as to how their hard earned money would be spent. For OTA to use the excuse that the USDA is now hostile to organic is ignoring the very real concerns of the whole organic community and that, despite plowing many hundreds of thousands of dollars into the promotion of their plan, they failed to convince certified organic farmers and handlers of their argument.

This is a very real win for true democracy and the power of farmers to work together collectively to promote their interests. This is not a question of producers not wanting to spend their own money on promoting and improving organic as suggested by some industry leaders. As individuals and producer groups, we will continue to support organic research both financially and with our sweat equity, and will promote the benefits and integrity of organic production every day.

May 15, 2018 (Kutztown, PA) – Organic Farmers Association (OFA), representing America’s certified organic farmers, applauds the U.S. Department of Agriculture’s action to terminate the rulemaking process to establish a mandatory national research and promotion program for organic (Organic Checkoff). The proposed program was divisive among the organic community, and checkoff programs must have industry support to be instituted—this proposal did not.

The proposed Organic Research and Promotion Program (ORPP) would have required all certified organic operations to submit annual gross sales reports, and all entities whose organic gross sales exceed $250,000 would have been mandated to pay 0.001% of their annual organic net sales. Dave Colson, President of Organic Farmers Association and certified organic farmer in southeast Maine commented, “Organic farmers already fulfill a heavy load of annual paperwork for their organic certification and additional federally-mandated paperwork would have been overly burdensome—especially for the 75% of certified organic farmers estimated to be exempt from the checkoff.” 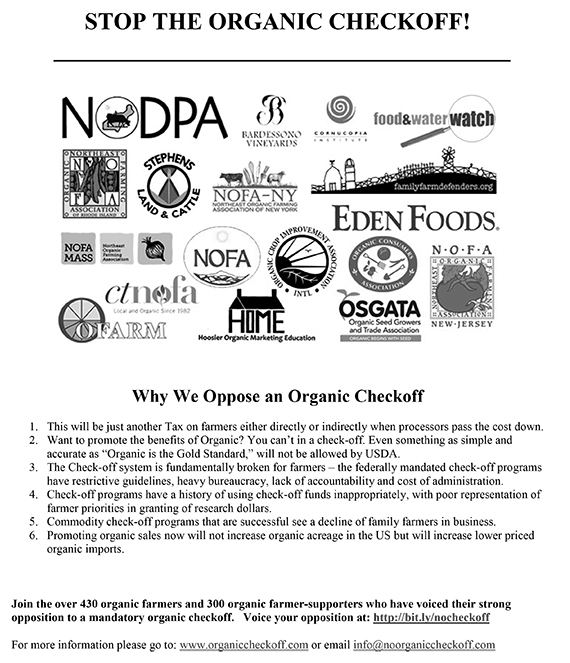