Sales of organic milk at retail are holding steady against increased competition from plant based beverages which lack the nutrition of milk but are easier for manufacturers to source supply and control costs of inputs.

Sales of organic milk at retail are holding steady against increased competition from plant based beverages which lack the nutrition of milk but are easier for manufacturers to source supply and control costs of inputs. USDA AMS reports total organic milk products’ sales for June 2018 were 202 million pounds, down 3.1 percent from June 2017, and down from January-June 2018 by 0.4% compared with the same period of 2017. On the good news side, organic Whole milk sales for June 2018, 82 million pounds, were up 1.1 percent compared with June of the previous year, and up 4.9 percent year-to-date 2018 compared with 2017. Interestingly, sales of Reduced Fat milk (2%) in June 2018 were up 5% from June 2017 and up 3.5% year to date in 2018 compared with year to date 2017.

In the only Federal Milk Marketing Order that reports utilization of organic milk, the monthly report for July 2018 shows that in Federal Milk Market Order 1, in New England, utilization of organic whole milk in July 2018 totaled 14.8 million pounds up by 5% from the July 2017 consumption of 14.1 million pounds one year earlier. Additionally, organic Reduced Fat milk utilization for July 2018, at 19.7 million pounds, was up from the 18.4 million pounds one year earlier, which is an increase of 1,324,174 pounds of total utilization of Reduced Fat organic milk year over year. The New England Milk Marketing Order attracts a high volume of organic milk for sale at retail and this consistent increase in Reduced Fat milk sales indicates that the industry may be absorbing the surplus of skim milk that has been the basis of the current over-supply. With the price of organic butter up by 32% in 2018 over 2017 ($6.39 as opposed to $4.82 in 2017), indications are that there is a shortage of organic butterfat. Strangely, the organic milk buyers are not making any strategic increase in pay price to reflect the demand for butterfat and the surplus of skim milk, apart from a small change in components by CROPP Cooperative. 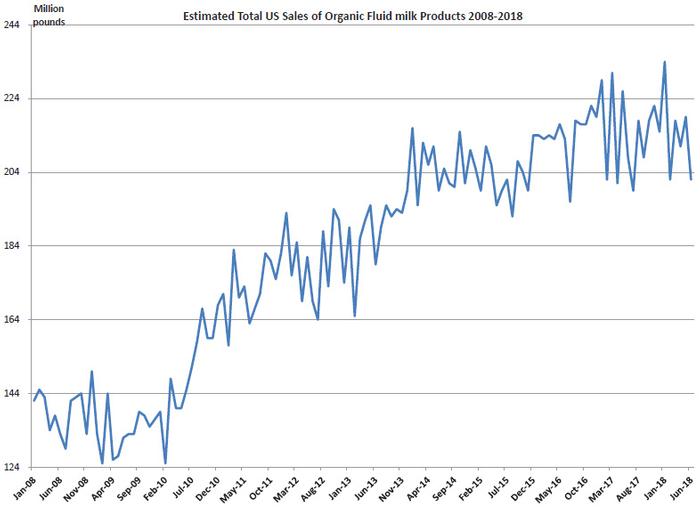 While many in the organic dairy industry lay the blame for the lack of growth in organic retail sales at the current wide differential between the cost of conventional and organic milk (the price of conventional versus organic half gallon), the data does not bear that out (see attached chart). In January and September 2016 the difference between organic half gallon and conventional was $3 and total sales of organic were increasing. Similarly, the price differential in March 2016, 2017 and 2018 were within a few points of each other (March 2016: $2.14; March 2017: $2.14 and March 2018: $2.27) and didn’t reflect the strength of demand in the organic milk retail market. As such any revival in the conventional market will only benefit organic pay price by the increase income that buyers receive from balancing organic milk surplus by selling into the conventional market. Organic pay price is tied more closely to the store brand loss leader retail pricing which absorbs large volumes of organic milk and is currently the largest selling ‘brand’ in the organic retail market. The surplus is more a reflection of increased demand for beverage milk and the rapid increase in supply by large scale operations. Interestingly, the recent news that Golfo di Napoli Dairy plans to locate a commercial organic cheese plant in Huntington County, Indiana, which will utilize USDA certified organic milk from Fair Oaks Farms. This is a split operation with its organic production certified under the name Prairie’s Edge Organic Dairy Farm, LLC. Large dairy manufacturers are choosing to locate near to large scale organic dairies and have a direct sourcing agreement, so the increase in organic demand will do nothing to benefit the majority of organic dairy producers who are smaller scale and subject to the limited market for their milk. 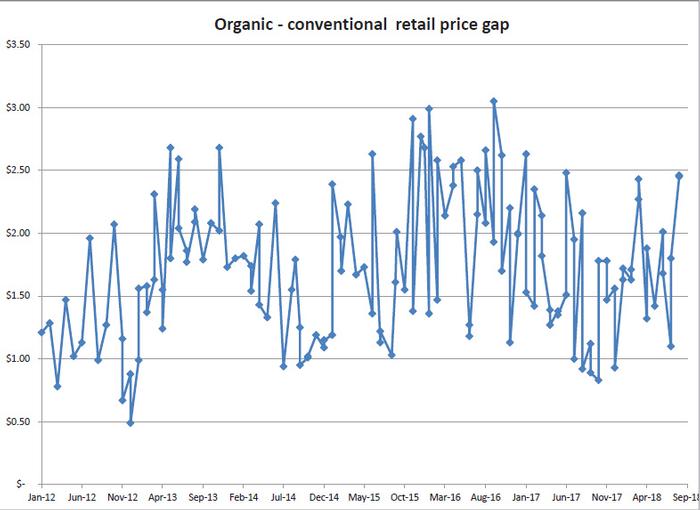 With a conventional pay price between $15-16 per hundred pounds, there is tremendous hurt in the whole of the dairy industry which has stimulated increased discussion of supply management. As Vermont Public Radio reported Vermont Agriculture Secretary Anson Tebbetts has seen the boom and bust cycle of milk prices for years. But these last few months have been the worst he’s witnessed. “In Vermont alone we’ve lost 66 this year. So we’re talking 8-10 percent of Vermont farmers have gone out of business this year,” he said. “Something has to change. We can’t continue to keep the current system in place if we’re going to retain farmers.” Agri-Mark wanted to explore supply management and set up a meeting in Albany NY on 8/13/2018. Several different supply management proposals were up for discussion. One is called a “base-excess” plan. It would simply pay farmers a set amount for milk produced at their historical production level – call that the base – and then anything over the base – the excess – would earn the farmer less. More information can be found at https://dairyproposals2018.com/ and at https://www.dairytogether.com/ and titles of plans are below.

The Jacobsen NON-GMO & Organic Weekly Bulletin reports that old-crop organic corn prices are edging higher, and continue to face upward pressure, despite a drop off in new-crop levels. Old-crop prices are trading above $10 per bushel picked up at the farm. The inversion for new-crop in the mid-west is hovering near $0.75/$1.0, as old crop prices continue to experience demand, especially in the eastern mid-west. Organic egg prices, organic milk volume and organic chicken heads slaughtered remain steady which means demand will be stable. 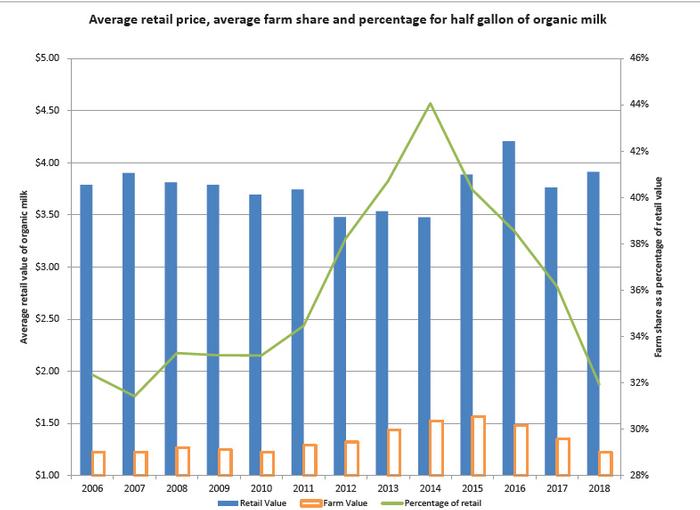 U.S. imports for organic corn is down 56% year over year in June and 79% year over year for the first half of 2018. NON-GMO yellow #2 CIF is trading from $0.10 to $0.20 premium over conventional for old-crop, but the decline in board prices could weigh on the premium. 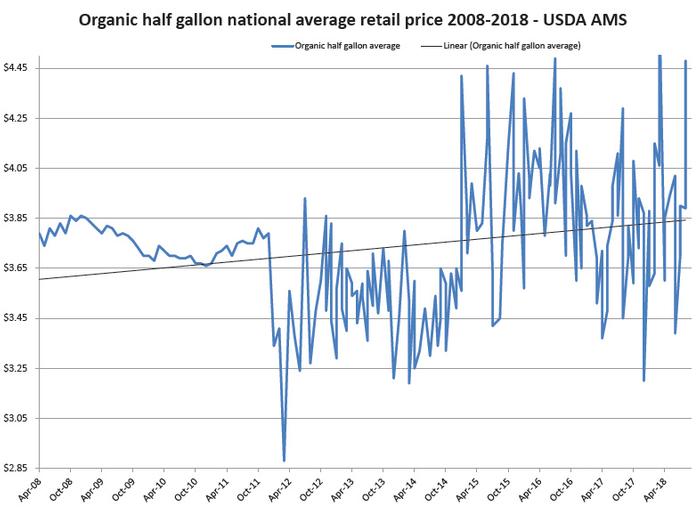