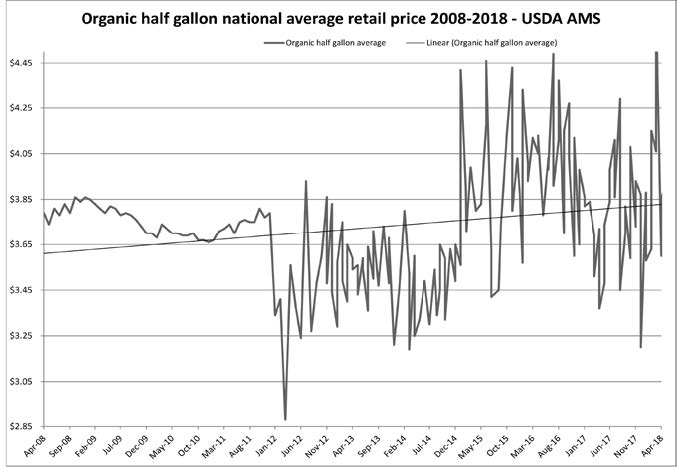 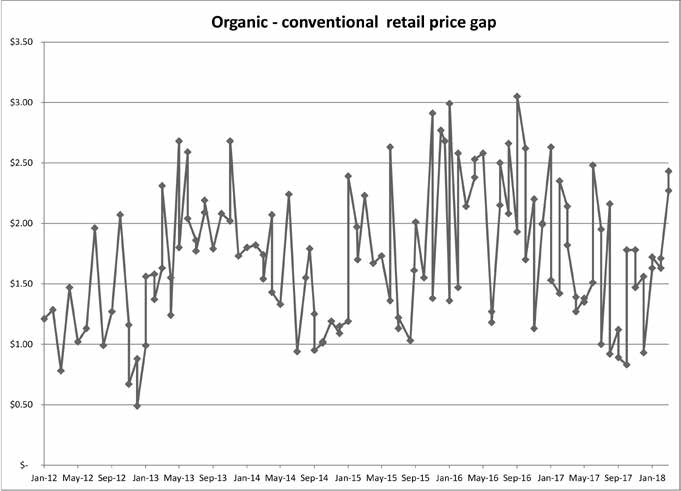 There is no movement on pay price or any lifting of production restrictions. The average pay price is at the same level as 2012. There are reports from all parts of the country that producers are being forced to accept lower prices to get a buyer, as low as $23 per hundred pounds in one area of the Mid West, with the assumption that this milk will be used for GMO free products. The consolidation of cooperatives that has mostly affected conventional producers has an effect on organic producers when they have to change handlers to gain a market for their milk or return to conventional production.

The system for determining pay price is broken for producers who have no leverage in the market. While there are regional differences in milk supply and utilization and differences in how the various handlers and processors have managed their oversupply, it is clear that farmers have had to bear the brunt of the economic impact of milk oversupply and we therefore have to lead the effort to create a better system that can be applied nationally to protect our collective interests. The current supply management practiced by the two major buyers has repeatedly failed and has not prevented or immediately curtailed oversupply. Without effective supply management there can be no long term sustainable pay price and we are doomed to the same three to four year boom and bust cycle of the conventional market. While many agree that a Canadian model cannot work in conventional dairy, perhaps there is still time to formulate a version for organic dairy. Perhaps the opportunity is greater now that the growth in demand for organic dairy is smaller and easier to predict. 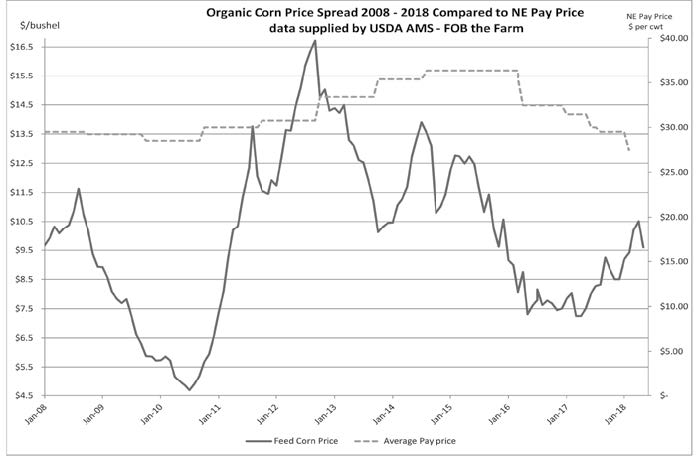 In 2010, representatives of the three regional producer Alliances spent some time in developing the basis of an organic dairy supply management program. This program assumes that there will be national pooling of organic milk under a similar system, though simpler and easier to understand than the Federal Milk Marketing Order which was originally set up to solve similar problems in the conventional milk industry. One organic pool of milk will have many costs saving for buyers and processors in terms of trucking, field staff and utilization of processing facilities. For processors, efficient supply management will reduce their cost of balancing to more predictable levels and save them from the high cost of a glut of milk. For producer/processors like Aurora Dairy, there will be the added advantage of not having to balance their supply on the back of their farm operations, saving the expense and operational loss of selling cows and reducing milk volumes. A single pool of organic milk will give USDA AMS great ability to track variances in production that may be caused by abuses of the NOP regulations. The main points of the program were:

1. Develop an allocation system (quota with an active base) for every producer based on some agreed upon method, i.e., most recent historical data, etc., regardless of handler/processor.
2. Must be mandatory across the country – if you produce organic milk you are in the program.
3. AMS will provide meaningful utilization and production data through mandatory electronic reporting, similar to the non-organic market.
4. AMS/USDA or an independent entity will be charged with monitoring the system and supply projections will be calculated based on utilization and historical information with allowances for unpredictable market demand of say 3%.
5. AMS/Independent entity will supply producers with quota adjustments quarterly to ensure any changes will be small.
6. Producers will adjust their quota accordingly, uniform increases are applied when demand exceeds supply, and reductions are implemented uniformly when demand drops.
7. Producers are not paid for overages.
8. Processors pay for all milk regardless of quota – cannot blend the price.
9. Over quota milk income goes to pay for the Supply Management Program – cost of data collection, accounting and administration.

The above ideas lay out the basis for a program if the organic dairy industry is willing to move forward to a sustainable future for all sizes of organic dairy operations and a consistent, high quality supply for processors.

This still does not address pay price but does give a stable platform for determining it. Consumers and other research tied to Buy Local programs has shown overwhelmingly that if the consumer knows the money goes back to producers they will pay more without dropping consumption. The retail prices that has been recorded since 2008 illustrates that a change in the retail price of up to $2 has little effect on sales. Some options that have been put forward for determining pay price are:

• Relating the pay price for organic to conventional pay price- this is inappropriate as inputs and production costs are so different. Showing the comparison between the two systems in terms of pay price lacks any rationality or honesty.
• Relating the pay price to the average retail price - this is difficult as the retail price varies by as much as $2 per ½ gallon and there are many regional fluctuations unrelated to where the milk is produced.
• Set a base price based on the costs of production that includes a standard Return on Investment (ROI) that allows for investing in the farm and in those that work the farm. The data is available to provide average costs of inputs and long term research is also available to make allowance for unique organic costs of production.
• One answer to determining pay price could be: Assume the base price with seasonal quality payments are what the companies can afford in ‘normal’ times and introduce into contracts and cooperative agreements a feed/input trigger that would change the pay price when certain criteria are met. This would have to be tied to supply management that is effective.

The Jacobsen NON-GMO & Organic Weekly Bulletin reports that Midwest organic corn activity for new crop contracting is picking up. With U.S. imports for organic corn down by 14% month over month in May and 90% year over year, old crop prices remain in the $9 a bushel region. Imports in 2018 are lower by 80% which have seen prices increase for bids on new crop corn near $9.75 and offers up at $10.25 at the farm. Midwest organic soybean trading activity is slow, ahead of new crop contracts. Imports are down 28% year over year, for 2018 and 49% month over month in May. Bids for organic soybeans are seen near the $18.75 handle and offers are up at $19.25. There is a slight carry reported for new crop beans. Mid-west and west organic food-grade prices are $21 at $22, with east coast organic food-grade soybean prices are $1.50 to $2 higher. Organic feed wheat has ticked up in tandem with corn and bids at $8.75 with offers coming in near $9.25 at the farm. Demand seems to have picked up with a dearth of old crop supply. 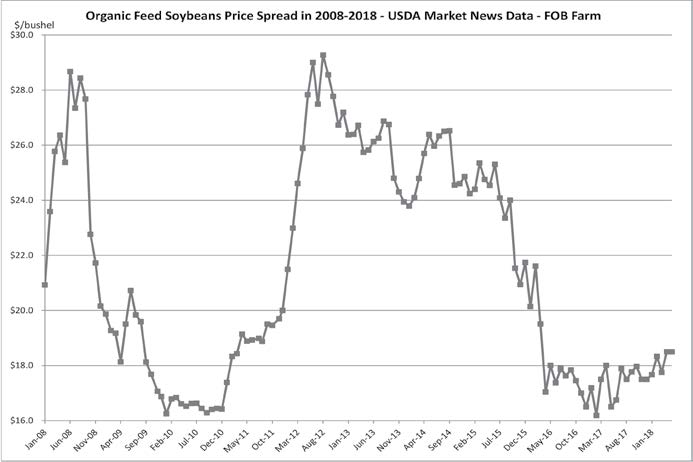 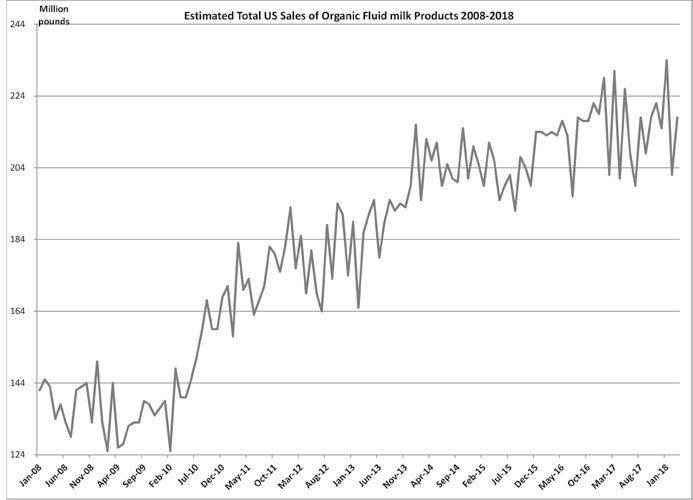