In 2018, NOFA-VT collected financial data from 34 organic dairy farms in Vermont, including 29 organic dairies and 5 grass-fed organic dairies. Each farm had been certified organic for at least 2 years, had good records for the 2017 tax year, and was willing to have their information aggregated and shared with others. This article will focus on the 28 organic dairy farms for which we had robust, comparable data; the grass-fed results can be found on our website but will not be discussed here. (Editor's note: Ed Maltby will present an analysis of the grass-fed results at the end of this article).

As a group, the 28 farms were representative of Vermont organic dairy farms when compared to the statistics for those that are certified by Vermont Organic Farmers (VOF), the primary certifier in the state. The farms in the study had an average herd size of 81 cows (with a herd size range of 25 to 328 cows), close to the VOF average of 78. The percentage of farms in the study selling to each milk buyer was almost identical to the percentage of VOF farms in each group.

In 2017, the organic dairy farms in the study group shipped an average of 1,294,173 lbs. of milk for a herd average of 14,942 lbs. per cow per year. The average milk price received by farmers in the study group was $36.90, down from an average of $38.09 in 2016. It is worth noting that there was a large range in pay prices between farms; the actual pay price received by any given farm was dependent on milk buyer, timing of contract re-signing, inventory deductions, and quality premiums. Gross income averaged $487,077 from milk sales plus an additional $33,859 of other income (i.e. cull cow sales, crop sales, government program payments, maple syrup, beef, and pork).

For further analysis, the 28 farms in the study were broken into three equal-sized profitability groups, which will now be referred to as low-, mid-, and high-profit farms. Just as in past years, the low-profit group is composed of the mid-sized farms (average herd size of 66.8 cows) while the smallest farms (average herd size of 49.4 cows) make up the mid-profit group and the largest farms (average herd size of 129.6 cows) continue to be the most profitable. This is unsurprising considering that the mid-sized farms have a harder time capitalizing on the efficiencies of larger farms but also tend to have more hired labor than the smaller farms. Interestingly, the low-profit farms shipped more milk per cow on average (14,194 lbs/cow) than the mid-profit farms (13,664 lbs/cow), yet that additional income does not offset the higher COP of the low-profit farms. 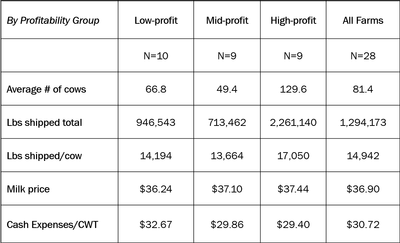 The average cash expenses per farm in 2017 were $348,963 with purchased feed (43%, $150,054), hired labor (18%, $62,813), and repairs (10%, $34,896) as the top three categories. The repairs category is one to keep an eye on over time as new equipment purchases as well as infrastructure maintenance and upgrades are being deferred due to tight cash flow situations on many farms. A demonstration of this can also be found in the fact that, on a per cow basis, the following metrics have remained relatively steady for the group as a whole over the past three years: interest expense, average assets, debt to asset ratio, and debt per cow. 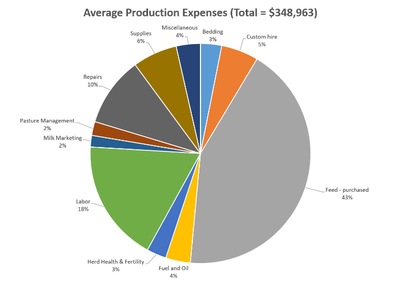 Facing depressed milk prices and inventory quotas, the primary option farmers have to remain viable is to have tight cost control systems or, in other words, to focus on efficiency to reduce their variable expenses and maximize their return to overhead. The high-profit group’s fixed expense per cow is $162 and $131 above the low- and mid-profit group respectively. This difference is driven in large part by the difference in interest expense; this indicates that the larger farms have been able to leverage funds to make capital investments in their farms, increasing their efficiency and profitability. The mid-profit group had the lowest variable expense per cow ($3,515), primarily due to lower hired labor expenses. The variable expense per cow for the high-profit group ($4,313) was only $187 more than that of the low-profit group, once again indicating the financial and efficiency challenges of mid-sized farms. This challenge was also evident in the paid labor expense metrics. The average number of cows increased by 35.2% between the low-profit group and the mid-profit group, however the paid labor expense decreased by 66.2% on a per cow basis and by 68.6% on a per cwt basis. Currently, with limited or no ability to increase production, it may be a worthwhile exercise for some farms to run their numbers with fewer cows to see if that increases their profitability. 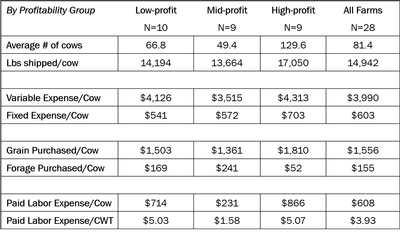 The overall profitability metrics are strongest for the high-profit group. Accrual adjusted net farm income for these farms was $228,046, which generally meant there was enough money for the farm family’s living allocation, debt service, and reinvestment in the farm. This is in stark contrast to the net farm loss of $11,666 for the low-profit farms. Rate of return on assets (ROA) was also strong for high-profit farms at 11.27%. However, asset turnover ratio was weak at 13.35%, meaning it would take the average high-profit farm about 7.5 years to gross enough to pay for all owned assets (goal is 3 years). Low-profit farms had an ROA of -3.85% and an asset turnover ratio of -.44%.

To get a true apples-to-apples comparison, EBITDA (earnings before interest, taxes, depreciation, and amortization) was calculated. This comparison is especially important to examine in this data collection system for two reasons. First, Schedule F depreciation is used and the rate applied across farms differs significantly according to their tax situation. And second, debt load between farms varies significantly and thus the interest expense will vary amongst farms based on the percentage of their assets that are financed. The pattern above holds true as EBITDA was $327,670 for high-profit farms, $71,956 for mid-profit, and $41,731 for low-profit. At these points, even if mid-profit and low-profit farms break even, it would likely be at the expense of the family living allocation, capital investments, maintenance tasks, and having any capital reserve on hand.

This is a challenging time in the organic dairy industry. With the pay price continuing to decrease and with many farms facing production quotas in 2018 and 2019, it calls into question how much longer many organic dairy farms can continue to hang on. NOFA-VT is continuing the cost of production study this year in the hopes that capturing and aggregating financial, production, and labor efficiency metrics will support decision-making around the viability of organic dairy farms in the Northeast.

Analysis of Grass-Fed Farms that took part in the survey

With such a small sample of only 5 farms it would be wrong to try to draw too many conclusions from this report but it does support some existing assumptions. Significantly, milk shipped per cow averages 5,000 lbs. less than the average across the 28 farms in the survey which gave an income per cow of approximately $1,000 less, even with the higher pay price averaging $3.50 more than the average in the survey. Interestingly the average cash expenses per cow for Grass-Fed were on average $1,500 less that the average of the survey which gave a very similar net income per cow of $1,047 as opposed to $973 for non Grass-Fed cows. Real estate taxes were significantly higher for Grass-Fed which indicates more acreage in production as was interest paid per cow. Obviously purchased mineral, feed and forage for Grass-Fed per cow were only 30% of the average for the survey. Other expenses that were significantly lower with Grass-Fed (at least 50%) included bedding, breeding, seeds and plants, vet, and medicine.

In summary there are no surprises with the Grass-Fed data and the same criteria that are significant for all dairy farms, organic or not, are the overhead costs that individual operators have very little control over. Those with a high debt load will survive in good times but will suffer when pay price is low. Grass-Fed is no silver bullet but with a skilled producer and low debt load there is opportunity for a modest contribution to family living, especially with non-dairy income and government payments.