Haying at the Troyer Family Farm

In 2009 the Troyer family made its way to the upstate New York community of Fenner in Madison County to start a farm, becoming part of what is now a cluster of 28 Amish families. The Troyers had been in Homes County, Ohio running a tarp business that made hoop barn covers, and were looking for more affordable land that would allow them to start a farm to support their family of six; in Ohio they only had 7 acres, which was not enough land to subsist on farming alone.

Ohio has the largest Amish community in the world, and escalating land values have led some Amish families to leave the area so they can buy land and operate farms, as living an agrarian lifestyle is the preferred way to live for the Amish. John Troyer grew up on a farm, as do many Amish, and wanted to be able to raise his family on a farm, but this meant leaving Ohio. In the last couple of years, due to health problems, John has stepped back from his involvement on the Troyer’s 65 cow organic grass-fed dairy, but still is quite busy running the farm store on the property, doing the farm’s books, and sometimes helping out with haying. John has given over responsibility for daily farm operations to his sons Michael (22) and Leroy (24).

The Troyers are rather unique in the organic dairy world in being organic from the start, never having operated a conventional dairy operation. When they first bought the 240 acre farm in Madison County they started a livestock operation with beef, chickens, and pigs on what had been the crop land of a conventional dairy farm. The family came to realize they needed to add something else to their farm to bring in enough income to support the family, and through a combination of good timing and geographic circumstances they decided to go into the grass-fed organic dairy business.

As Michael described it, “we needed more employment in the farm, and Tim Joseph, founder of Maple Hill Creamery, was here at a local discussion, and we became believers in this grass-fed organic thing, we saw it being a good thing for us.” The Troyers have largely avoided planting crops or forages on their land because “we have a lot of rocks here, so tillage is not a good option here,” said Michael. The previous farm had grown crops for its cows, but there was a lot of erosion and the Troyers saw that it made more sense to go to an exclusively pasture based system with no tillage. They wanted to reduce the erosion and didn’t want to be picking rocks out of the ground all the time. And “grass-fed is a lot simpler, there’s one less thing to do.” While the quality of pastures is acceptable, Michael said that they are looking to improve the soil. They are experimenting with compost, foliar organic gem (fish fertilizer) and humus extract. “At this point we’re just playing with it. We’re trying to see what bang we get for the buck. For the most part organic matter levels are not so low, but the soil is extremely high in calcium, which might be tying up some other nutrients. We want less calcium. The goal is to get the biology functioning...biology takes care of a lot of that stuff. 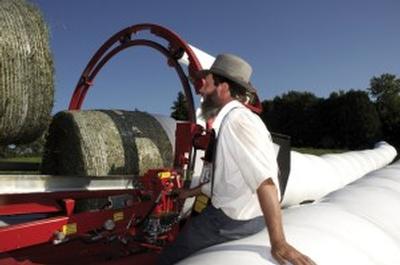 FARMING IN A GRASS-FED CLUSTER

Maple Hill Creamery, based in Kinderhook in the Hudson River Valley 2.5 hours to the east, only processes and sells grass-fed milk, (see March 2019 issue of NODPA NEWS for a story on the new 3rd party certified grass-fed label Maple Hill is helping to create) and this rocky farmland was a great place to recruit farmers to raise organic cows using grass only. There are now 14 grass-fed organic dairies within ten miles of the Troyer farmstead, one of which is his sister’s farm. Organic Valley also operates a grass-fed organic dairy route in the area; it was started after Maple Hill established its grass-fed route. There are only three grain-fed organic dairies in the same ten mile radius. This cluster of organic grass-dairies is an important source of support; local organic graziers periodically host pasture walks to discuss their experiences with their peers in the area.

The land the Troyers bought did not include a barn or a milking parlor, which gave the Troyers the opportunity to design and build a barn and parlor that was most suitable to their needs. They built a 44’ x 150’ barn that uses a bedded pack for the milking cows. The feeding area is 44’ x 50’, and the rest of the barn is bedded pack loose housing. In the winter the heifers are kept in a portable hoop barn that is 24’ x 36’; it is moved around the farm and chickens are kept in it in the summer. Heifers are outside all the time in the summer, but always have the option of going inside in the winter, not so much because of the cold, but more to get out of the mud. Dry cows are sometimes kept outside in the winter, and sometimes kept in the big barn with the milkers. Michael and Leroy would like to build another dry cow building so they can all be inside at the same time. In addition to the barn, the Troyers built a new swing eight parlor. As to why they chose this parlor, Michael explained—“It’s what a lot of other people around here are using. I guess I wouldn’t go with anything else. It’s really efficient labor-wise. 60 cows can be milked in just about an hour.”

When they started, the Troyers brought in a lot of cross bred cows, primarily Jersey/Holstein crosses, but only use Jersey bulls now for breeding. Michael and Leroy are breeding for A2A2 genetics because they feel there might be a special market for A2A2 market in the future, given that there already are some A2A2 non-organic brands. While they usually have extra calves to sell, they did buy some cows last winter. Each year about 11 replacement heifers are kept in the herd. The rest, along with the bull calves are sold at the local sale barn. They are not getting a premium for either grass-fed or organic on their animal sales.

Their production is on the lower side at 8,500-9,000 lbs. per cow, but it is important to keep in mind they feed absolutely no grain to their cows. Michael believes production should go up with improved genetics and also improved forage quality over time from building up the soil. He indicated 10,000 lbs. per cow is a feasible target for the near future. During the grazing season, their cows and heifers are out on grass basically all the time. Cows are moved every twelve hours between paddocks that are ½ to 3 acres in size depending on the time of year and how much grass there is. It usually takes 25-35 days for the herd to rotate back to the same paddock. Michael relayed that they might feed only a few bales of hay to the cows for the whole grazing season. While on pasture, the animals have free choice access to minerals. In the winter the cows are fed mostly baleage composed of a mixture of grass and legumes. They will sometimes buy some hay to supplement what they cut from the pastures. The best quality hay is fed to the milking cows and calves; they try to reserve the lower quality hay for the bred heifers and dry cows. While the Troyer farm is doing well with an all grass and forage diet for its cows, Michael expressed that he and other grass-fed organic dairies in the area could do a better job of getting the most out of their pastures. According to Sarah Flack the average ratio in the area is five and a half acres of pasture and hay land per cow, which Michael feels should go down, with three acres being a very reasonable target, with some already at this ratio. Being more efficient with resources in this manner would make the farms more competitive.

The Troyers have done a remarkable job of building up a very healthy herd in a short amount of time. They do not vaccinate at all; their cow health maintenance program relies primarily on keeping the cows on good grass and providing free choice access to minerals. Michael reports they have one or two cases of milk fever a year. When they first brought cows from several different farms to start the dairy operation they had some pink eye and foot rot; these problems have largely cleared up. They had vaccinated initially for pink eye but decided to stop after they failed to see much difference between the vaccinated and the non-vaccinated cows. Scours have never been a problem, which Michael attributes in part to keeping the cows on their moms for 4-5 months. There’s a cost to doing this as it means the calves drink a lot of milk. Michael said he would consider having a nurse cow with 2-3 calves on one cow to save some milk, but does not want to go back to using a barrel feeder because it takes more work. Since it’s basically just Michael and his brother Leroy, they need a highly labor-efficient feeding system; in their system the cows do the work. Another benefit of having calves nurse mom is their body condition is better.

Michael and Leroy only call in a veterinarian once a year, primarily to do a herd pregnancy check in the late fall or early winter when most of the herd has been bred and should be pregnant. Michael explained— “We do our own vet work for the most part, whatever needs to be done. With grass-fed organic you have so many fewer issues. Herd health has improved steadily over the years as cows that are raised from birth up on grass have acclimated well.”

The Troyer farm is an excellent example of how a well-run organic grass-fed dairy farm contributes to improved soil health, herd health, high labor efficiency, and overall a profitable dairy operation with low input costs. However, Michael expressed that the biggest threat he sees to dairies like his is the lack of enforcement in the organic dairy industry. “Organic megadairies and fraud are ruining consumer confidence. Big 5,000 cow dairies are simply in it for the money, they're not trying to produce a superior product…what organic should really be--- a quality product that’s good for the environment….[but] as long as the money is flowing to the fake organic it’s going to continue. The love of money is the root of all evil…. If nobody would buy their milk that would take care of it. It’s not that I’m opposed to efficiencies of scale. You can cheat with 5 cows or 5000 cows, but you’re going to have a hard time grazing with 5,000 dairy cows.” For Michael managing grass-fed dairy cows is a livelihood, but it’s also a way of life that he strongly identifies with. “For me….I never really had another job. I don’t have any desire to have another job. A lot of the advantages I take for granted...For me...it’s just what I do.”