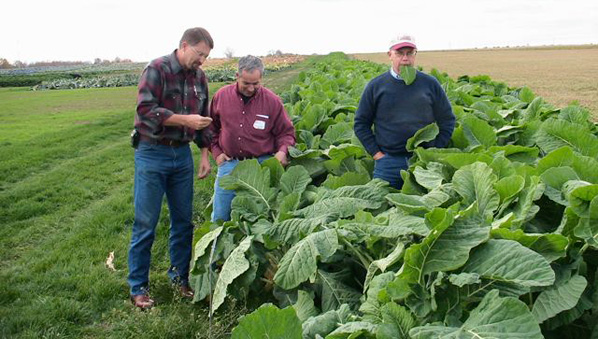 A summary of what took place at the event

NODPA’s 8th Annual Field Days and annual meeting were held in the beautiful Finger Lakes region of New York from Sunday, October 26 to Tuesday, October 28th. Sixteen members of the NODPA Board and State Reps held a meeting on Sunday to look at NODPA’s role over the next five years and how to build an infrastructure for the future to achieve these goals. In the evening the Board held elections for NODPA officers: Henry Perkins was elected President; Rick Segalla as Vice President; Dave Johnson as Treasurer; and Liz Bawden as Secretary.

Kathie Arnold welcomed attendees on Monday morning and introduced Clark Driftmier, President of the Fairhaven Strategy Group, who presented on “Organic Dairy Industry-Trends and Perspectives.” With over 25 years of management experience in the natural and organic products industry, Clark was able to give his views on the future of the organic retail market and the need for a unified approach to solving the difficulties and problems in the organic dairy market. His presentation was positive on the future for organics and he shared many useful insights including, “Why retailers love store brands”; the segmentation of the organic dairy market; and the three different types of shoppers. While growth of the organic industry is not estimated to be at such a high percentage as in previous years, the industry still expects double digit growth to increase gross sales from its current $20 billion to $40 billion by 2013.

Clark’s presentation was followed by a farmer panel of Roman Stoltzfoos (PA), Darlene Coehoorn (WI), Arden Nelson (CO) and Jerome Walker (LA) who discussed their own challenges in 2008 and their thoughts for the future. A round table discussion followed with the assembled producers who generally agreed that no matter what areas of the country they were farming, inputs were too high and pay price was too low. Before lunch Joe Romano, marketing manager for Green Star Natural Foods Market in Ithaca, NY, gave a short presentation on the marketing of organic product and the challenges in deciding price points for different products.

After lunch, there was a farm tour of Mary-Howell and Klaas Martens’ farm and Lakeview Organic Grain, LLC. Klaas and Mary-Howell Martens, their three children, Peter, Elizabeth and Daniel, and several employees farm 1,400 acres of organic grains. They have farmed organically since 1993 and produce corn, soybeans, spelt, wheat, barley, oats, triticale, red kidney beans, edamame and other seed crops. They raise organic replacement heifers, pigs and chickens. The Martens also own and operate Lakeview Organic Grain LLC, an organic feed and seed business in Penn Yan, NY, primarily serving organic dairy farmers throughout New York and northern PA. On the way to the Martens’ farm, attendees stopped to view a field trial of Meristem Kale at Bejo Seeds Farm. Kale is one of the possibilities for farmers who wish to extend fall grazing through the use of annual plantings of brassicas.

At the Martens’ home farm, Klaas dicussed soil fertility strategies and crop rotations. The group was met by daughter Elizabeth’s friendly and inquisitive heifers. With the soybean roaster humming away in the background, farmers discussed weed suppression strategies in grain crops and compared problems they encountered this year. On the way back, the group visited some corn fields that had not yet been harvested. Mary-Howell happily reported that the organic grain crops in NY are yielding very well this year.

NODPA’s annual dinner and meeting was held Tuesday evening and featured a short report from Ed Maltby, NODPA Executive Director, and the annual President’s report from Kathie Arnold. Both Steve Morrison and Kathie Arnold were honored with signed and numbered Bonnie Mohr prints in appreciation for their many years of dedication and work for NODPA and organic dairy producers. Steve was President of NODPA from 2001 - 2008 and led the organization from a subset of NOFA Vermont to an independent non-profit that provides an independent voice for producers. He received ‘She’s Got the Look’, a print of Jerseys, in appreciation for his work for NODPA, in the past, present and the future. Kathie was at the inaugural meeting for NODPA and has served the organization as editor of the NODPA News, NODPA President in 2008, Board member, State Rep and Chair of the Policy Committee, with many hours of detailed work commenting on the organic standards. She received ‘Pride and Joy’, a Holstein cow with calf print, in appreciation for her work and on her retirement as President and from the NODPA Board.

At the Producer meeting that followed the presentations the producers passed the following motions:

Tuesday morning was dedicated to the first official listening session on the proposed Access to Pasture Rule with Richard Mathews, USDA NOP Chief Standards Development & Review Branch. The session was attended by organic dairy farmers from the Northeast, Louisiana, Colorado, and Wisconsin and representatives from the Organic Trade Association, Accredited Certifiers Association, four organic dairy processors, five organic certifiers, and non-profit groups who have been closely following the issue for the last four years.

Mr. Mathews spent about an hour presenting a PowerPoint on the proposed rule (go to our rules page to see it) and shared his reasons for including different language in the rule making. After his presentation he requested comments from the participants, with no restriction on time but with an explanation he might not be able to answer all questions as the publication of the rule made some issues “ex-parte.” For the next two hours, attendees made comments, asked questions and shared their appreciation for Mr. Mathews work on the rule. Producers expressed their appreciation at being able to talk directly with NOP professionals that wrote the rule and to engage in mature conversations with no rhetoric or grandstanding, but friendly discussion on a professional level.

The Field Days ended later than scheduled at noon and was followed by the “Understanding Organics: Livestock Management and Health Conference.”